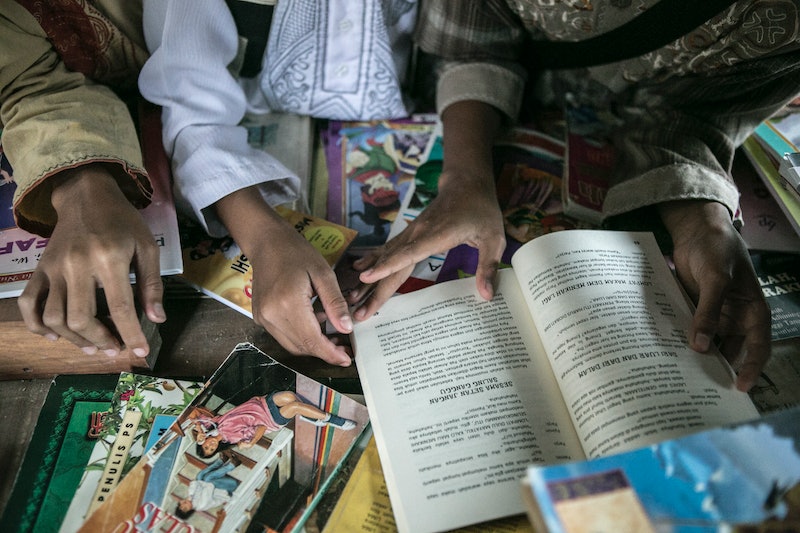 Maybe you can't remember the title, or maybe it's out of print, but, if you're a book nerd, you've got at least one book that got away. Rejoice! One publisher is out to change all that. New York Review Books republishes classics, children's books, and world literature in new, affordable editions.

Bringing these titles back isn't a difficult task, as editorial director Edwin Frank points out. Speaking with The New York Times, Frank notes that the New York Review Books (NYRB) is "picking at low-hanging fruit" by republishing titles with lapsed copyrights, "only, no one knew the fruit was out there." Many of the publishing house's titles come from household names — including Anton Chekhov, Walt Whitman, and Tove Jansson — but are lesser-known works that haven't been in print for years.

Not all of NYRB's titles are particularly old, however. As the publishing arm of literary magazine The New York Review of Books, the house also deals in recent nonfiction, including Joan Didion's Fixed Ideas and Bill Moyers' Welcome to Doomsday. Ian Buruma, a New York Review of Books contributor, will see his 1994 title, The Wages of Guilt, reprinted in September.

Despite these contemporary credentials, the tiny publisher has cornered the market on reviving nearly-forgotten novels, poems, and stories. Among its more prominent reprints are Daphne du Maurier's Don't Look Now, Barbara Sleigh's Carbonel and Calidor, and Linda Rosenkrantz's Talk.

NYRB currently offers books in six series, including NYR Children's Collection, NYRB Poetry, and Calligrams: a unique series devoted to titles from and about China in antiquity. If it seems as though the house is pulling its material broadly, even randomly, your impressions are correct. The publisher set out to be mosaic when it was founded in 1999. The aim, Frank states, is to provide a "whole mix of things that a curious person might be interested in, which would take you back and forth from fiction to certain kinds of history."

To that end, the house's offerings are tailored more toward serving a based of loyal fans than raking in cash. From a business perspective, it makes sense. As Chad W. Post — publisher of NYRB's not-for-profit competitor, Open Letter — tells The New York Times, a tiny publishing house cannot realistically hope to "compet[e] on a grand scale with Penguin, Random House, [or] F. S. G." The alternative, of course, is to make a series of otherwise unrelated titles into a cohesive brand, complete with a shared typeface and format, for fans to latch onto.

For what it's worth, Calligrams editor Eliot Weinberger views NYRB's success as an affirmation. In a business largely driven by fluffy, pop-fiction trends, he notes that it's possible to "run a completely successful publishing company just publishing serious literary books."

And book nerds everywhere rejoice! Here are five of the most interesting titles the NYRB Classics series has to offer.

A High Wind in Jamaica by Richard Hughes

A High Wind in Jamaica begins with seven children leaving a hurricane-wrought Jamaica for England. When their ship is captured by pirates, a strange string of events unfolds, ending with a murder trial, a pregnancy, and an oddly resilient little girl. It's an odd book, but that's part of its charm.

K'ung Shang-jen's The Peach Blossom Fan, written in 1699, details the 1644 fall of the Ming Dynasty. Two lovers — a reformer and a courtesan — meet, are separated, and meet again as the world crumbles around them. The title refers to the courtesan's engagement present, which is eventually painted with a peach blossom design in her blood.

You'll Enjoy It When You Get There by Elizabeth Taylor

No, she's not that Elizabeth Taylor, but this author deserves some recognition. Thanks to nods from Sarah Waters and Hilary Mantel, she's finally getting some. Originally published in The New Yorker, Taylor's short stories are women's fiction of the highest degree.

Tatyana Tolstaya is an often-overlooked contributor to the rich heritage of Russian Literature. White Walls is comprised of two previous short-story collections, On the Golden Porch and Sleepwalker in a Fog, making it a prime choice for anyone interested in postmodern Russian fiction.

A product of Nazi-occupied France, Georges Simenon's Dirty Snow captures that bleak time and place to perfection. It's a dark novel, the story of a young man caught in a dreadful spiral of crime, punishment, and death. Dirty Snow isn't a light read, but it's a book you should add to your TBR immediately.