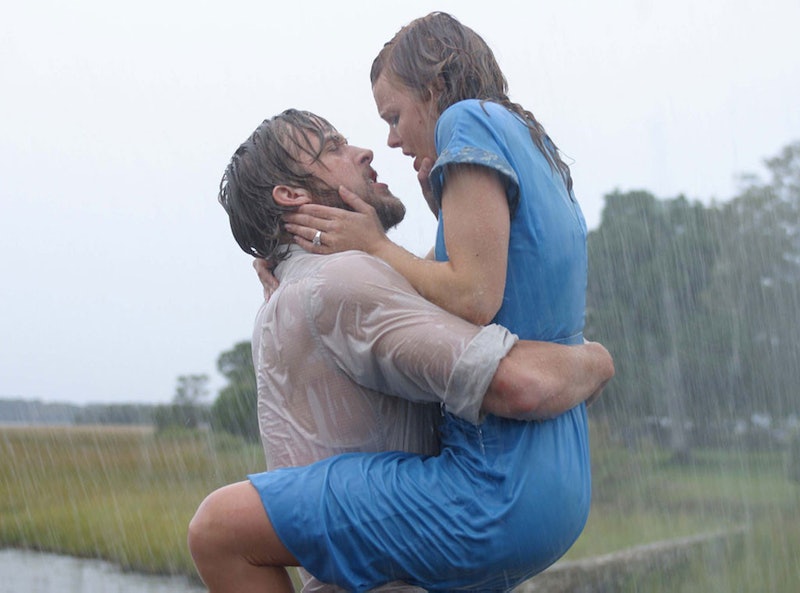 Don't hate me for saying this, but prior to today, I'd never seen The Notebook , and therefore have failed at life. But when it was announced The CW was developing a TV series based on The Notebook, I knew that the time to keep the film tabled had ended. The classic tale of a summer love that just wouldn't die had to become the subject of this week's bad movie rewatch.

Now, before you get out your pitchforks and torches, let me clarify: I did not hate The Notebook. The costume design is stellar, the chemistry is palpable, and the story isn't ridiculous. But it still had its illogical moments. Once you move past the ~love~ between Allie and Noah, you'll see a handful of things that are just flat-out crazy pants. There weren't a lot, sure, but they were there — hidden by the gleam of Ryan Gosling's handsome face, and Rachel McAdams' flawless everything.

We both know you're gonna rewatch it when you get home from work today, but before you tune into the film for the umpteenth time, allow me to (chronologically) point out all the weirdness within The Notebook.

"Because this is a carnival, and I met you like two seconds ago."

2. Noah Threatens Suicide To Get A Date

This isn't romantic. This is some sick coercion. Like, imagine if some creep was threatening to jump into traffic if you didn't date him. Open your eyes, people!

3. He Then Follows Allie Around Trying To Get A Date Out Of Her

Again, remember the non-Ryan-Gosling guy who harassed you on your way to work, demanding your attention for three blocks? THIS IS VERY NOT ROMANTIC IN REAL LIFE, GUYS.

4. Noah & Allie Watch A Movie While Their Friends Casually Bone Next To Them

This scene is, in short, why I never double dated in high school.

5. Everyone Is Really Bundled Up, Considering It's Summer

At one point, you can see their breath. It's June.

And their friends are likewise overdressed for the weather, as you can tell from the scarf made of I-don't-even-know-what.

7. "After That Night, Allie And Noah Became That Couple"

"...licking each other's faces in broad daylight. Noah and Allie gave a remarkably convincing portrayal of a boy and a girl who gave no regard for the general community who had to bear witness to their gross PDA."

So not only does Allie look 3000 percent stupid in this scene, but it feels like nobody told her that birds (sans penguins) aren't the ones who swim in water. Rich people are so cute and misinformed.

9. This Is, Without Question, The Most Ridiculous-Looking Person In The History Of Cinema

I mean, COME ON. Seriously, that mustache?

10. Relive The Romance When Noah Rents Out The Addams' Family House For He And Allie To Boink In

What happened to the days when you just did it in your stepdad's minivan?

11. And In The Most Realistic Moment Yet, Allie Reveals That She, Like Me, Is The Girl Who Nervously Asks Questions When A Guy Is Trying To Get It In

"What time is it? Do you think my dad is wondering where I am? Should we maybe turn off Wayne's World first before we go any further?"

Whoa, guys, the claws are coming out.

SHE SAYS, AFTER BREAKING UP WITH HIM.

14. Then In An Absolutely Incredulous Turn, Noah Writes 365 Letters, Which I Can Only Imagine Must Read Like Blocked Texts From My Ex-Boyfriend

How did he get under the snow?!

16. In This Scene, We Note That Allie's Mom Looks Only Five Years Older Than Her

She's not like a regular mom. She's a cool mom.

But somehow forgets to shower.

18. Average Saturday Night For Me

In a bath, with a drink in my hand, a wedding veil on my head, and a picture of Ryan Gosling at my side.

19. "It's OK To Be Nervous, Alright? It's Normal To Get Cold Feet Before Your Wedding."

"No, no second thoughts."

She says, lying to his face. To be fair, choosing between Ryan Gosling and James Marsden is like the ultimate Sophie's choice.

20. This Gives Me Anxiety

21. Yeah Allie, That'll Keep You Dry From The Rain

"...minus the three years I was off making it with my handsome, supportive, wealthy fiancé."

She said, lying to his beautiful, perfectly chiseled face.

26. The Fact That This Part Made Me Choke Up... Literally

Actual correspondence with my roommate:

More like this
'Black Panther 2' Star Dominique Thorne Prioritizes Her Career Over Dating
By Jake Viswanath
Then Vs. Now Photos Of The 'Enchanted' Cast In 2007 & The Sequel's Stars In 2022
By Marina Watts
See 'Twilight' Stars Together Again For A Sweet Cullen "Family Reunion"
By Stephanie Topacio Long
'The Princess Diaries 3' May Go Ahead Without Anne Hathaway
By Darshita Goyal
Get Even More From Bustle — Sign Up For The Newsletter