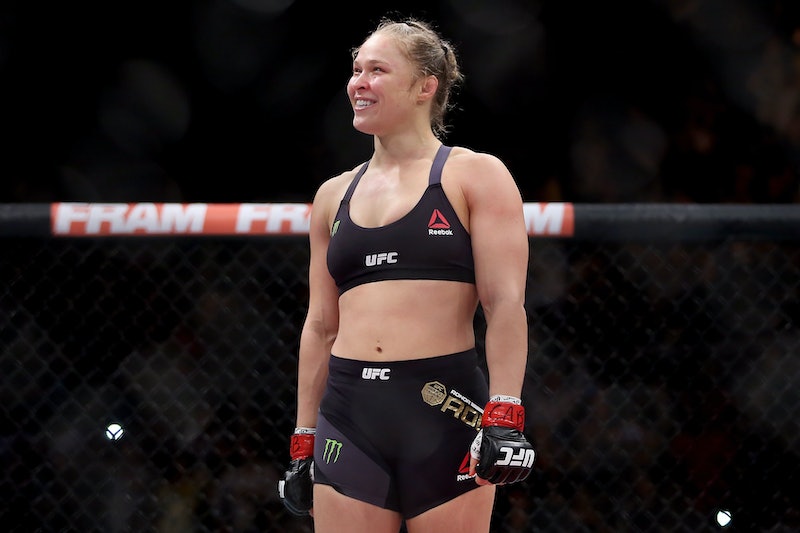 Champion MMA fighter Ronda Rousey isn't just dominating her sport these days; she's also finally getting some well-deserved attention from the media, too. And if you're eager to know even more about her, you can now check out Ronda Rousey's recent "Ask Me Anything" on Reddit, in which the award-winning athlete provided some pretty awesome answers about her life. (As if we needed any more reasons to root for her.)

Of course, Rousey isn't a totally controversy-free figure by any means. In the past, she's expressed some less than accepting views on trans athletes, and raised eyebrows with the catchphrase "I'm not a do nothing bitch" — which personally, I'm not a big fan of. However, Rousey's also dropped some pretty awesome truth bombs along the way, as well. (Who can forget when she called out Floyd Mayweather for his alleged abuse back in July?) But no matter what her personal views may be on hot-button issues, you can't deny Rousey's a pretty incredible athlete and a pioneer in the male-dominated world of MMA fighting. And if nothing else, she's incredibly interesting, and awesomely outspoken.

Rousey first kicked off the AMA by stating a few random facts about herself. (And unleashed a few strong feelings about Game of Thrones while she was at it.):

Ronda here. My favorite Pokemon is Mew and I used to moderate a Pokemon forum. I'm an active player on WOW and a Mage named Randa on TaichiPanda – I’m on the 3rd Game Of Thrones book and will shank a bitch who tries to give shit away about the series cause you watched the show already.

Oh, and I'm also the UFC Bantamweight Champion and undefeated in MMA.

Here's the rundown on everything else Rousey shared during her AMA:

On Her Pre-Fight Playlist

When asked what she listens to during a fight, Rousey shared:

"I have complete silence before I walk out before a fight. No talking in the locker room, no music, cellphones on silent. If I hear a ding from you taking a video you're gonna get your own private Rowdy Glare."

At one point during the AMA, a speech therapist who'd heard Rousey recovered from a speech disorder as a child asked about her experience with her speech therapist. They also asked what she'd say to kids with speech trouble. Rousey responded:

I love my speech therapist – I thought she was super cool and I didn't even know I was in speech therapy. I'd like to tell any kid struggling with speech that anything can be overcome with hard work regardless of how insurmountable the odds seem. Shout out to all speech therapists. You're all awesome. And the best thing about my recovery was that I was never allowed to feel [inferior.]

On Her Views Of The Media

One commenter asked how Rousey felt about the media coverage she's received, including the way she's portrayed, to which Rousey said:

I accept that I have NO control over my image already. So, I try not to let the state of my perception have any effect on my happiness. You can never truly know anyone through only media anyway. If anything I just try to keep in mind that I'm an entertainer and not a politician or Miss America.

Rousey also called out the way in which the media often fixates on women's bodies and contributes to unfair beauty standards.

"As many of you already know," she writes, "I get a lot of questions about femininity and body image. Women are constantly being made to feel the need to conform to an almost unattainable standard of what’s considered attractive so they can support a multitude of industries buying shit in the pursuit of reaching this standard."

On The Only Person She'd Be Afraid To Fight

When asked who she would be legitimately afraid to fight, Rousey replied, "That one gnarly giant dude from 300."

In other words, the only person she's afraid of is fictional.

On Recovering From An Eating Disorder

One commenter wrote how inspired she was by Rousey's recovery from an eating disorder, and asked how it felt to conquer something so difficult. Rousey's response:

Thanks for the kind words. It feels very liberating to free of the guilt that used to come with every meal. And I feel like I have so much extra space in my brain now that I'm not constantly thinking about the next meal and trying to eat as much as possible every day while still losing weight. I feel amazing. I (think) I look amazing. And I just ate some bomb-ass french toast this morning. I'm so happy to hear about all the progress you've made on yourself and best of luck for the future.

On Just How Much She Loves Chicken Wings

It seems Rousey is pretty into chicken wings. When asked about her favorite cheat food, she says that she loves "buffalo wings naked with chunky blue cheese and extra hot sauce on the side," and when asked how many chicken wings she can eat in one sitting, she says, "At least 60 in one sitting. But there were no bets on the table. I think I could've done more if it really came down to it."

One Reddit user asked if Rousey thought she could beat Floyd Mayweather in a rule-less fight. Her answer? In a fight without rules, she thinks probably.

"Do I think I would legit beat Mayweather in a ruleless fight?" she writes. "Floyd is one of the best boxers of all time. He would definitely beat me in a boxing match. I unfortunately don't get into 'matches.' I fight for a living. In a no rules fight, I believe I can beat anyone on this planet. Boxing is a sweet science with strict rules that I respect very much and aspire every day to improve at. But you said ruleless fight, and that's my honest answer."

Yep — turns out Rousey is even more badass than I thought she was. (And a whole lot more relatable, too.)