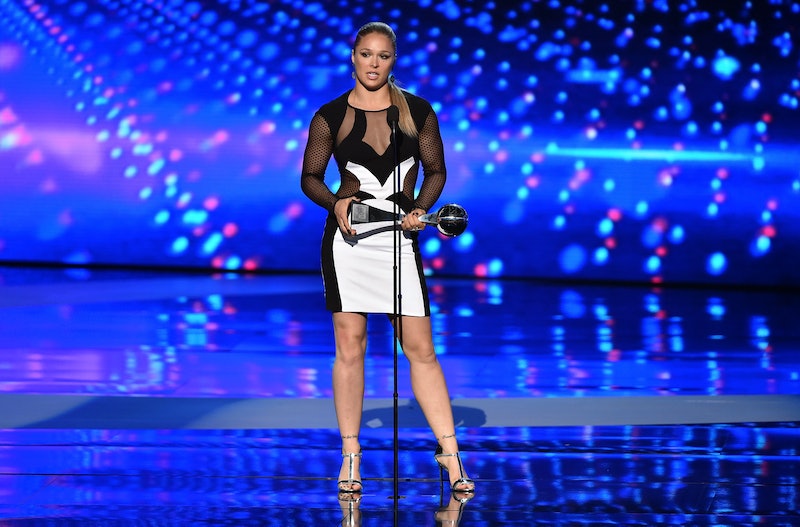 Let's be honest: The ladies are killing it in the pro sports world right now. Serena Williams is going for a total sweep of grand slam titles, the U.S. women's soccer team destroyed it at the World Cup, Caitlyn Jenner is inspiring millions of people around the world, and on Wednesday night, Ronda Rousey took home the award for Best Fighter at the ESPY Awards. And that's not all — in her acceptance speech, Rousey also called out Floyd Mayweather for some B.S. comments she claims he made about her previously, and appeared to be calling out his alleged violence against women in the process when she joked that she'd "beat" him. Yep, last night, Rousey proved that not only does she not take any crap in the octagon — she definitely won't take any out of it, either. Especially not from the likes of Mayweather.

As for why Mayweather was even brought up during Rousey's speech? The ESPYs don't have separate categories for men and women, which put Mayweather (and three other men) in the same category as Rousey. (It also means that Rousey won despite being the only woman nominated — so get it, Ronda!) However, it turns out that the mixed martial artist and Mayweather have a not-so-friendly history. Which is why Rousey couldn't pass up the chance to let some comments fly when she beat him. Still, this wasn't the first time she had some strong words for Mayweather — the two have exchanged quit a few zingers over the last year, starting with some buzz in 2014 about what would happen in a fight between them. Who knows how a true battle of fisticuffs would pan out, but when it comes to verbal sparring, it seems like Rousey is winning. Here's a brief timeline of their back and forth, starting with ...

"I Wouldn't Even Be Anywhere Near Him."

In February of 2014, Rousey told Los Angeles radio station Power 6 FM that she could beat Mayweather in a fight. Her strategy plan? Rousey told the radio station she'd stay low to the ground and "monkey crawl" towards Mayweather and then "tackle him." As for her rationale, she explained that she spends a lot of time down on the mat, whereas Mayweather only fights standing up, so she'd have the ultimate advantage. (Seems like a reasonable strategy to me.)

In July of 2015, Mayweather was asked in a small press meeting whether or not he thought he could take Rousey in a fight. Mayweather's response? "I don't even know who he is." (That's right — "he.") I'm not totally sure I buy that response, but moving on ... Mayweather did later apologize indirectly to Rousey, telling reporters, "I apologize because I didn't know. I'm used to watching football and basketball. I'm not really into boxing like that. When they tell me, 'Floyd, you need to check out a fighter, you need to scout a fighter,' I'll say, 'Well, let me see him.'" Hmm ... does a sexist apology still count as an apology?

"Unless We Ended Up Dating."

In May, Rousey sat down with Access Hollywood to discuss her appearance in Entourage. When asked if Rousey would ever fight Mayweather, Rousey responded with this darkly humorous remark: "I don't think me and him would ever fight, unless we ended up dating." To many, that little zinger seemed to strongly allude to Mayweather's domestic violence charges and allegations. If so, I'll admit it seems in slightly poor taste to make light of such serious accusations. But I will say this: I like that Rousey doesn't want to let him off the hook for it.

"I'd Like To See You Pretend Not To Know Who I Am Now."

After being handed her award for Best Fighter on Wednesday, Rousey didn't waste any time dissing Mayweather, "I can't help but really say that, I wonder how Floyd Mayweather feels being beat by a woman for once. I'd like to see you pretend not to know who I am now." Boom! Roasted! Rousey got back at Mayweather for not knowing who she is, and again got a jab in about his history of domestic abuse.

For now, Rousey reigns supreme, and will hopefully keep calling Mayweather out on his disregard for her talent and esteem in the fighting community, and for his alleged treatment of women. Plenty of boxing fans still idolize Mayweather, and we need bold superstars like Rousey to keep these issues front and center.

More like this
David Beckham’s Controversial Qatar Deal Skyrocketed His Net Worth
By Catharina Cheung
'Breaking Bad' Duo Walt & Jesse Are Back — In This Super Bowl Commercial
By Jake Viswanath
Twitter Is Identifying With Sally Field & Jane Fonda’s Friendship In New Viral Video
By Jake Viswanath
Watch Jacinda Arden’s Devastatingly Honest Resignation Speech
By Sam Ramsden
Get Even More From Bustle — Sign Up For The Newsletter
From hair trends to relationship advice, our daily newsletter has everything you need to sound like a person who’s on TikTok, even if you aren’t.