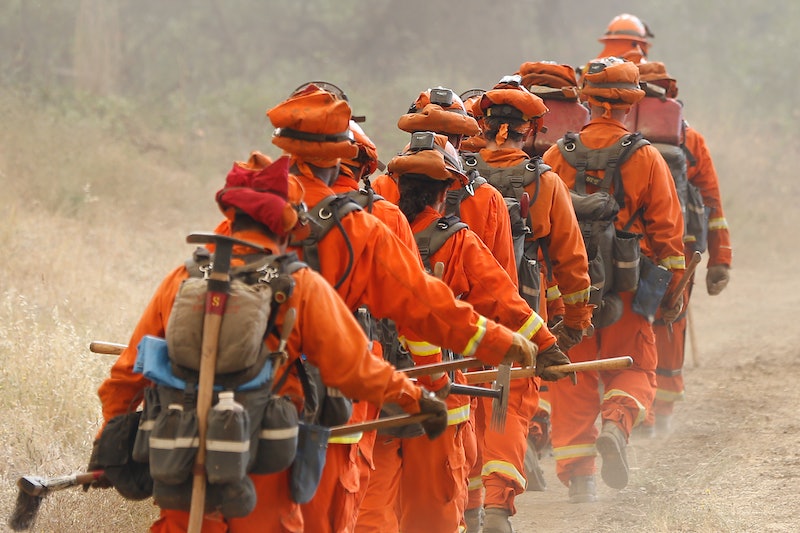 Almost half of the more than 10,000 firefighters combating California's wildfires are prison inmates. Trained and deployed by California's Department of Corrections and Rehabilitation, the inmates are on the front lines against some of the year’s worst fires. They are paid $1 an hour for emergency responses and are on call 24 hours, seven days a week. The CDCR characterizes the Conservation Camp Program as a rehabilitation project that prepares prisoners for their reentry to society while also cutting costs on disaster response; according to CDCR, California saves more than $80 million each year on fire response by relying on the conscript labor. But the harsh working conditions and low pay should raise questions about where the line lies between preparing inmates for the real world with an ethic of hard work and exploiting those convicted of crimes as cheap, easily controlled labor.

Started back during World War II to fill a labor shortage, the use of prison labor to fight forest fires took off in California during the 1980s. Today the Conservation Camp Project trains and manages more than 4,400 inmates through 42 camps throughout the state. Ostensibly limited to nonviolent inmates who have the physical fitness to keep up, the program provides 64 hours of training to the inmates in fire containment before sending them to their base camps where they will work five days a week on any number of community service projects — clearing trails, setting up state parks for events, building flood barriers, and the like.

The inmates remain on call in case of a fire emergency, camp commander Lt. Donald Bruens told TV outlet LA Now. Once brought into the field, they work alongside professional firefighters for 24-hours shifts, hiking up and down mountains with heavy equipment, cutting fire lines, and putting up with the scorching heat from the flames. As BuzzFeed's Amanda Chicago Lewis notes, the professional firefighters wield the more technical equipment — bulldozers, water hoses, and the like. The inmates supply more of the grunt labor, cutting down underbrush for hours in hopes that a fire can be contained.

At the camps, the inmates can earn a small salary through their labor, around $2 a day. During emergency responses, they make $1 an hour on top of that.

The CDCR positions itself as a rehabilitation program for nonviolent offenders that seeks to prepare them for their reentry into society by instilling discipline, teaching the value of hard work and providing them with some savings to get started on. "The rehabilitation part is what excites me, because we have programs here to help the inmates get back in society," Captain Glenn Goulet, a camp superintendent, told LA Now.

It is certainly true that in the conservation camps, the prisoners are not treated like your average criminal. Few of the camps have fences or much in terms of guards. Instead of being crammed into cells and having their movements tightly regulated, the inmates can spend their free time in the camp as they please. “Here, at least, you can come outside,” inmate Demetrius Barr told BuzzFeed in 2014.

On the firefighting teams, inmates say that they work alongside the foremen and fire experts that direct them. For the first time in a long while, they are treated like men, inmate Cory Sills told KQED Science.

"The lieutenant comes out and he goes, 'Look, we'll treat you like men first, firefighters second and prisoners if we have to,'" Sills said. "That right there, that stuck in my head for two years now because now I have a chance to be treated like a man."

Working on a firefighting team teaches these inmates how to work hard for something, according to state officials and program administrators. Sometimes that may be true: As Barr told BuzzFeed after weeks at work in the conservation camp, the routine does give you a sense of accomplishment.

The reason that California is saving so much money per year on disaster response is because the state is getting away with absurdly low wages for jobs that should warrant much higher pay. The very cost-cutting that the program trumpets is also its ethical blind spot.

After all, it is not like the inmates have much of a choice either. Most inmates, Lewis notes, wouldn't do this work unless they had to, preferring to stay well away from the raging fires. But they take both the training and the work in stride because the only other option is a return to prison. And many inmates face shorter sentences if they work through their time.

The CDCR doesn't have hard figures to support its claims about the rehabilitative potential of the firefighting camps; instead, the program administrators rely mostly on anecdotal evidence, reports KQED Science.

What is known is that very few inmate firefighters go on to work in the field after their time is up — only about 3 to 5 percent, according to BuzzFeed. Part of that is because some fire departments won’t hire ex-felons and the job market can be competitive, but a key factor behind that low retention rate is the fact that most of these inmates wouldn't be out on the frontlines of California's wildfires, doing dangerous and hot work for long shifts, if they had other options.

The role of the inmate firefighter doesn’t look to be going away any time soon. Other states have followed California's example and created their own conservation camps where inmates are put to work on emergency response teams, including Nevada, Colorado, Montana, Wyoming, Arizona and Utah. None of them, however, are as large or involve as much manpower as California's.

And over the past few years, California has certainly needed the help, as wildfires have charred more than 250 square miles. So far, 2015 has not been a great year for forest fires in the dry, windy West either. Aided by one of the worst droughts the region has experienced in the past 1200 years, blazes continue to rage across California, forcing evacuations and decimating mountainsides. The Jerusalem Fire, named after the Jerusalem Valley where it took off, has taken over 14,000 acres alone since it erupted on Sunday, according to Cal Fire. Only about 6 percent of the blaze is under control as of Wednesday. And the firefighting teams have just gotten the Rocky Fire — which swept across more than 70,000 acres and evacuated thousands in northern California — mostly in hand this week.

With climate change promising drier seasons, hotter temperatures and more changeable weather, California will need a robust firefighting and disaster response infrastructure in the years ahead. Some worry that the increasing demand for well-trained fire personnel is coinciding with the state's push to shrink its prison population, particularly by releasing the sorts of nonviolent offenders that the conservation camps target.

But thus far, Bill Sessa from the CDCR notes that the state's fire teams have not had a problem finding recruits among the state and local prison populations.

“All of the predictions up to now of having a reduced prison inmate population to work the fires have kind of fallen through — because even though we have fewer inmates than we used to have, we still have enough,” Sessa told Capitol Public Radio last week.