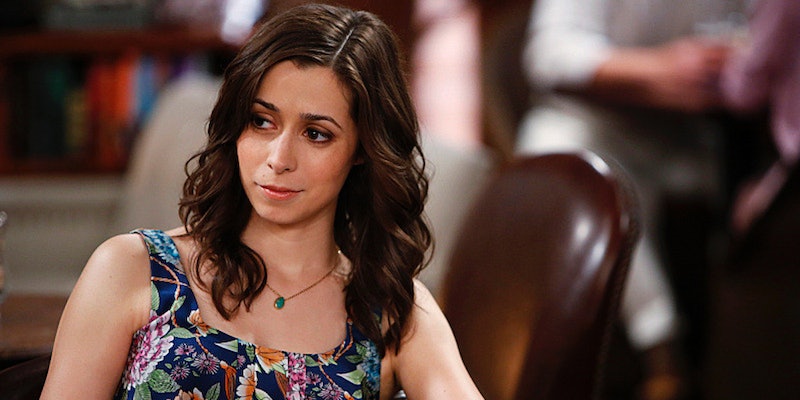 Though it pains me to say it, I was very happy to check the listings tonight and discover that How I Met Your Mother would be taking the week off. Anyone reading these recaps all fall — anyone watching the show, with eyes — will understand that vague sense of disloyalty I’ve felt criticizing it, like I was hurting HIMYM to ask for it to be better. I mean, it’s delivered to our homes for FREE, right? Who are we to complain? But complaining (or recapping, as I call it) is about all you can do with episodes built around ghost-hunting and Parent Trap scenarios. You sort of run out of options!

But given the time tonight to really ruminate on where the show has gone and how it might find its way home, I thought it would be worthwhile — hell, just therapeutic — to lay out some talking points for HIMYM's six-month creative rehabilitation. The show's writers have already thought about this shit far longer, and more intelligently, than I could. But, you know, in case they haven’t:

I don't hate Billy Zabka. But I can't stand the ever-spinning carousel of guest stars that's found time for him, or two minutes of Bryan Cranston's architect from a bunch of seasons ago, or Ted's step-dad CLINT. Clint practically launched a spin-off series in his episode! Instead of reminding us that, yes, this show gave us a lot of zany guest stars over the years, why not take the opportunity this season to introduce one or two more sizable characters (COUGH MOTHER COUGH)? Or even upgrade existing players? Barney's brother James has been in enough episodes this season to warrant a longer, more interesting character arc. Barney's mother, too — rather than playing her for a joke, we might really invest in her character to see some genuine dramatic change.

How I Met Your Mother has always succeeded in helping us care about its characters, no matter how ridiculous (or recently, vile) some of their actions can be. The plain and simple fact is that HIMYM should have ended about two seasons ago. But it didn't, and now the best way to course-correct how cartoonish some of the main characters have become might be to inject the edges with something resembling human behavior.

2) Make The Mother your sixth lead

All of the best scenes so far this season have included The Mother in some fashion, from her meet-cute with Lily on the train (they get along!) to the flashback that revealed her crucial role in getting Barney to propose to Robin. She is exactly what this show needs — a wonderful, warm character who brings out the best in characters who have largely descended into cartoon mania. She’s made Lily less shrewish, Barney more empathetic, and Ted… well, more early seasons Ted than increasingly sad, desperate Ted.

Now, “sad, desperate Ted” is obviously the model we're meant to know right before he meets The Mother, reinforcing just how much she’s The One and Makes Him Whole. We get it. But built into the very fabric of your show, HIMYM, are the flash forwards and time-jumping that allow you to have your cake and eat it too. All of your characters are so much more pleasant when the Mother is around!

3) No one cares about the show mythology

By "mythology," I don’t mean the search for the mother, which is thankfully very nearly at an end ( ...along with the show). No, I’m talking all the mysteries and half-told stories that have accumulated over nine seasons of uncredited Bob Saget narration. The Ducky Tie. Slap Bet. The Goat. The Pineapple. Etc., etc. I’m no show historian and thus couldn’t tell you what HIMYM has yet to resolve or answer for. But the fact is — and I don’t think I’m alone in thinking this — it doesn’t really matter. HIMYM isn’t LOST — no one watches or has watched to see those “mysteries” finally answered, like all along the show was a puzzle to put into place. They’ve been fun over the years, but in the way a digital easter egg is fun — you smirk in recognition. You don’t mark it down on a looseleaf document called “HIMYM QUESTIONS I DEMAND ANSWERS TO.” The show’s producers misjudge their audience to focus on arcane trivia.

4) Introduce some real drama to the wedding weekend

I maintain that one of the best things this show could do would be to have Robin realize she was about to marry a sociopath and run for the hills. Or at least get cold feet, opening up a genuine conversation about her fiancé’s many and diverse sins. Neither of the above scenarios is close to funny (even by, like, Danish humor standards) BUT in introducing some heavy shit to the Farhampton weekend, you’d be addressing a few issues:

Just because we know that Ted will meet the Mother at the end of the series — something we’ve known right from the start, pretty much — doesn’t mean you can’t incorporate believable conflict along the way. What if — and I’m spitballing here — Ted and his date (Anna Camp) really hit it off? And we didn’t know how exactly he’d move from her to The Mother? What if one of Barney’s crazy old conquests showed up to stir the pot? These ideas are not that interesting, which is one reason I’m not writing for the show, but HIMYM shouldn’t be afraid to play with its characters a little more freely. Don't keep them in their original action figure packaging! Let them out!