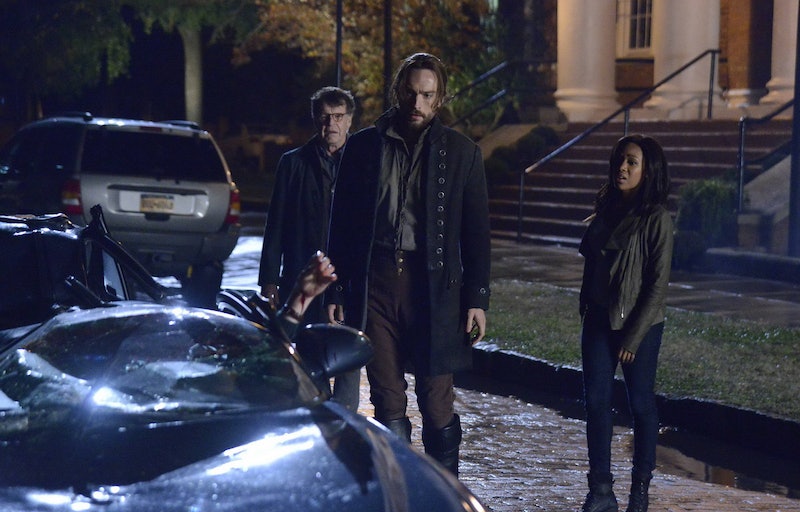 It’s an understatement to suggest that Ichabod Crane probably feels a little out of sorts in the contemporary Sleepy Hollow he’s woken up in. Dude’s out of his ice cave bed for, like, two months and he’s already been attacked by a slew of persistent demons (some regional, some from that pesky nether realm). On top of that, he’s contending with cultural barriers left and right, from the weed-like presence of Starbucks to conversational hiccups with Abbie. And THEN there’s the whole “my family is dead, or in limbo” thing that’s really just gotta turn your smile upside-down. The English are already a traditionally dour people without experiencing the kind of shit that now must appear to Ichabod as a normal day.

But it’s safe to say that of all the things Ichabod has learned since emerging from cryo-slumber, the revelation that Katrina had a son (his son, thankfully!) after he’d been magicked asleep has to sting the most. His wife, she’s pretty safely — or let’s just say “definitely” — enmeshed in Limbo, a place that doesn’t seem all that difficult to access. She shows up on a fairly regular basis, anyway, to both Ichabod and Abbie. Even if she can’t foresee that Ichabbie will totally be an item by the end of the season, she still seems to have figured most of her shit out. But there’s no magic dream portal with which Ichabod can communicate with, let alone see, his son. Ridiculous sci-fi/fantasy/horror show though Sleepy Hollow may be, it understands that there’s pretty heavy emotional ground to be mined from Ichabod’s plight.

“Golem,” the last episode of 2013, recognized this and built an emotional, satisfying story out of what could have easily been a silly monster-of-the-week plot. Yes, we had 5-10 minutes of the spin-off show Orlando Navigates His Depressing Divorce with the Help of His Wheelchair-Bound Daughter, a series I have called “hahaha” in my head, but that was safely contained in the margins of an otherwise tight episode. Here’s what you need to know:

So that's the plot, right — that's what happens to advance the larger Sleepy Hollow story forward. But any fan worth his or her salt will tell you we’re just wasting time when we SHOULD be talking about the moment Ichabbie found themselves under some mistletoe. It was a fleeting ripple in time, a tease of dictionary proportions. But OH, it happened. I paused and rewound probably sixteen times, carefully noting the characters’ respective head placement and breathing patterns. While this process ultimately didn’t reveal any new information to me — in what episode will they finally kiss, for instance — I can safely say that it was not a waste of my time, and I’d encourage you all to do the same. If we can’t ‘ship two super-hot people who are clearly preordained by Moloch himself to come together at some point in their seven-year battle against the forces of darkness… then I don’t know what we’re even doing here. Hold fast to your dreams, everyone.