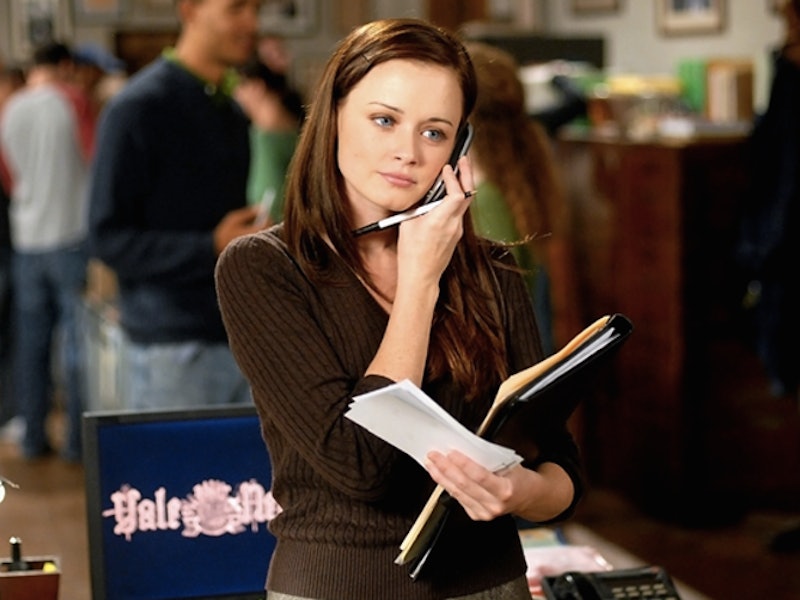 Like many Gilmore Girls fans, I idolized Rory Gilmore from pretty much the first time I saw her on my TV screen. As a bookish and mostly introverted tween, I felt like Rory just got me. When I watched her high school experience, I imagined mine would be similar. I didn't have any crazy ideas or aspirations to be the popular party girl — I wanted to be the valedictorian who got all the Ivy League acceptance letters in the mail on the same day. And when you're effortlessly killin' it academically in middle school before the days of AP overload, countless extracurriculars, SAT prep, and precious little sleep, it seems entirely possible that as long as you work hard enough, you'll be the next Rory Gilmore. Spoiler alert: It's a lot harder than it looks on TV.

I was pretty horrified and disappointed when my perfect role model went off to college and made a few egregious errors in judgement — losing her virginity to a married ex-boyfriend, stealing a yacht, dropping out of Yale, and shutting out Lorelai when she dared suggest Rory may want to re-think some of her life choices. I still loved her, but what was she thinking?! By the time I reached my own college years, the show was in re-runs and I was, uh, making my own fair share of bad decisions. When Netflix blessed us with all seven seasons of Gilmore Girls last year, I marathonned them all with either really impressive or really embarrassing speed, depending on how you want to look at it. My main takeaway from re-watching Gilmore Girls as an adult was that when Rory lost her halo and started making some actual mistakes, she became not only a more interesting character, but also a more realistic role model.

1. Her Perfection In High School Was A Little Much

I appreciate the overall idea behind Rory's characterization in high school — and for the most part, it was realistic. Many TV shows of the early 2000s were filled with protagonists who never talked about academic interests, barely interacted with their parents, and preferred partying to uncool hobbies such as reading. Plenty of kids finish high school without drinking or having sex, so I think Rory set a great example that it's totally OK to hold off on anything you feel uncomfortable with.

However, I think she could have made a few more small judgement errors, because even the best-behaved teens do. Plus, after that infamous "D" on her first English paper at Chilton, Rory never hit an academic hiccup. Her amazing work ethic and dedication were admirable, but even most of the high school valedictorians I know had the occasional class that required asking a teacher for after-school help in order to stay on top of his or her Straight A game.

2. If You Don't Make Any Mistakes In College, You're Just Not Human

My 15-year-old self was absolutely horrified to see my TV idol lose her virginity to a married guy — and let's not even talk about the fact that this was Dean, the dude I regard as the most insufferable person Rory ever dated. So, yeah, that's a pretty major mistake, but let's not forget she had about 19 years to make up for. It was also the first time Lorelai had to actually give Rory tough love and tell her the blunt truth that she was "the other woman."

This was when Rory officially became more realistic, because freshman year of college is prime time for making some seriously bad judgement calls — even for people who went through high school with a pretty unblemished behavior record. The new freedom of being away from home for the first time combined with the stress of adjusting to a tougher academic course load often leads to some not-so-healthy coping mechanisms. The criticism that Rory's actions were totally out of character is actually kind of the point — even the best people have their moments of behaving in the worst ways.

3. Her Mistakes Ultimately Made Her Mother-Daughter Relationship Stronger

I don't think Lorelai and Rory ever took their bond for granted, but nothing makes you appreciate the most important person in your life quite as much as when you spend months not speaking. And, although I didn't love watching them both suffer through their estrangement, I actually think this was a pretty accurate depiction of what it's like to feud with your mom when she also happens to be your best friend.

Being BFFs with your mom is basically the greatest thing in the world. But it also means you're not accustomed to arguing with her, so neither of you is quite sure how to handle it when you find yourself disagreeing over a major life decision (like, for example, stealing a yacht and dropping out of Yale). When you both value each other's opinions so deeply, things get heated quickly and suddenly you've said a bunch of things to each other that you didn't really mean. The hurt feelings can be hard to move past, especially when you're dealing with two stubborn and strong-willed individuals like Lorelai and Rory.

When they finally reconciled, their relationship was stronger because Rory had gained insight into what Lorelai's upbringing had truly been like. Meanwhile, Lorelai had accepted that her daughter wasn't always going to be a perfect angel and that she needed to just step back and let her learn some things the hard way.

4. Having To Answer For Your Actions Makes You A Stronger Person

Rory never really had to answer for her actions in high school because, well, she barely made any mistakes. Although Rory had some definite luxuries during her college-era mistakes, even her grandparents' money and fancy accommodations couldn't get her out of cleaning up garbage along the freeway when she should have been back at Yale. Although she was the main instigator of her falling out with Lorelai, Rory certainly suffered emotionally during their estrangement. And, when she did re-enroll at Yale, she had some serious coursework to make up in order to graduate on time. But most of all, Rory really had to answer to herself and come to terms with the fact that she'd let one jerk's discouragement during an internship totally derail her plans and dreams.

5. The Best Role Models Are The Ones We Can Relate To

Don't get me wrong, high school Rory was an amazing role model — we watched her spend countless weekends studying, be an amazing daughter to a sometimes neurotic mom, and look for the best in insane classmates named Paris. Her ambition, work ethic, and compassion should always be admired. But, at least to me, reaching Rory's level of perfection during those seasons felt downright unattainable. In life and on TV, seeing your idol make some mistakes reminds you that no one's perfect and that's more than OK. Watching someone deal with the repercussions of her actions and doing their best to right their wrongs, is way more inspiring than seeing a person coast through an error-free existence.

When we see our role models make mistakes, we can be more forgiving of our own missteps and choose to learn from them and move forward rather than beat ourselves up for not being the epitome of perfection. And that's why we all owe Rory Gilmore a huge "thank you" for screwing up big time and helping us accept this truth.

More like this
All The ’70s Easter Eggs You Missed In 'That ’90s Show'
By Grace Wehniainen
This 'Gossip Girl' Wardrobe Error Has Gone Viral On TikTok
By Alyssa Lapid
At 28, Debra Jo Rupp Was Living A Much Different '70s Show
By Grace Wehniainen
'Brookside' Is Coming Back & Soap Opera Fans Are Going Wild
By Sam Ramsden
Get Even More From Bustle — Sign Up For The Newsletter
From hair trends to relationship advice, our daily newsletter has everything you need to sound like a person who’s on TikTok, even if you aren’t.