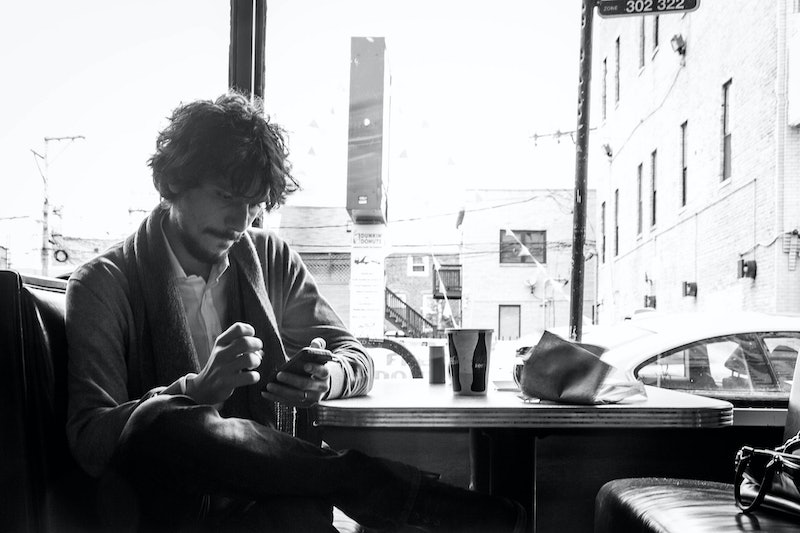 Everyone’s favorite hookup app got called to task by journalist Nancy Jo Sales in Vanity Fair last month. Titled “Tinder and the Dawn of the Dating Apocalypse,” the article basically blamed the hot-or-not app for ruining dating for everyone. The article focused on a select group of men and women who, admittedly, were either having some pretty terrible experiences dating on Tinder or were doing some pretty terrible things while dating on Tinder. For example, “Marty” was clear that he’s not above deceiving women in order to get laid.

“‘I sort of play that I could be a boyfriend kind of guy,’ in order to win them over, ‘but then they start wanting me to care more … and I just don’t.’”

So… You have the attitude of fratty bankers everywhere and always? Cool story, bro.

Tinder responded with a total social media meltdown, calling out both Sales and Vanity Fair for misrepresenting what they really do. “We’re not just a hookup app!” they yelled. "Look, some people even got married, guys!" Like a little kid being called “gay” on the playground, Tinder wanted everyone to know that they weren’t that way.

Just like my friend who really, really liked the Wizard of Oz really did end up being gay, Tinder is that way. And while I can take plenty of issues with Sales’ article — the fact that she decided to use a very small sample of privileged young people to extrapolate a “dating apocalypse” being first among them — her calling Tinder a hookup app is not one of them.

Because Tinder is, first and foremost, a hookup app. We live in a society where so many people are using a piece of technology for casual sex and yet everyone is pulling the whole wink-and-nod to say that they’re not really using it for that. In fact, no mainstream app or dating site has yet to admit that they exist to help people get casually laid.

But all of the euphemisms are simply ways for these apps to dance around the big scary elephant in the room that is casual sex. We. Are. Terrified. If you don’t believe, take the recent court case out of Michigan, where a young man went to jail for the “crime” of using Tinder to arrange casual sex. Zachery Anderson was 19 when he drove across state lines to hook up with a girl he met on Tinder. The girl told him that she was 17 but turned out to actually be only 14. Anderson was arrested, tried, found guilty of statutory rape, and will spend the rest of his life on the sex offender registry once he has completed his jail sentence.

Dan Savage pointed out that the judge in Zachery’s case seemed to be trying him not for statutory rape but for the “crime” of using an app to hook up.

“You went online, to use a fisherman’s expression, trolling for women, to meet and have sex with,” Judge Dennnis M. Wiley said. “That seems to be part of our culture now. Meet, hook up, have sex, sayonara. Totally inappropriate behavior. There is no excuse for this whatsoever.”

So because one judge thinks that using technology to get laid is “totally inappropriate behavior” — behavior, by the way, that I would bet a year’s worth of income that someone in his family has engaged in — this young man’s life is ruined. And while Zachery’s case is extreme, Judge Wiley’s perspective on hooking up, unfortunately, isn’t. The puritanical perspective that sex is something that should only be experienced within the bounds of holy matrimony still pervades our culture to such an extent that apps like Tinder and Grindr spend hundreds of hours tripping over their own tongues to make sure that no one thinks they’re like that.

Now, I’m not saying that no app has ever claimed to be a hookup app. I sang the praises of Pure a couple of years ago when they came out with their pro-hookup app and manifesto, complete with a very sexy intro video. But where is Pure today? Definitely not boasting millions of users and billions of matches, as Tinder is. By claiming to not be like that, Tinder has managed to gain mainstream following, if not complete mainstream respectability. Pure, on the other hand, has been abandoned in the failed startup scrap pile.

I’m just so tired of it. I’m sick of the outrage and the wink-wink-nod-nod. I’m sick of cases like Zachery’s and I’m so done with “all-male location-based social networks.” I’m ready for a hookup app to come out and say, “Yup, our app is for hooking up. Point?” the same way my elementary school friend finally told everyone he was gay. I would really love for the next Twitter storm from a mainstream app to be about calling out some hypocrite like Judge Wiley but from the recant to Sales’ article, it looks like I’m going to have to wait awhile.