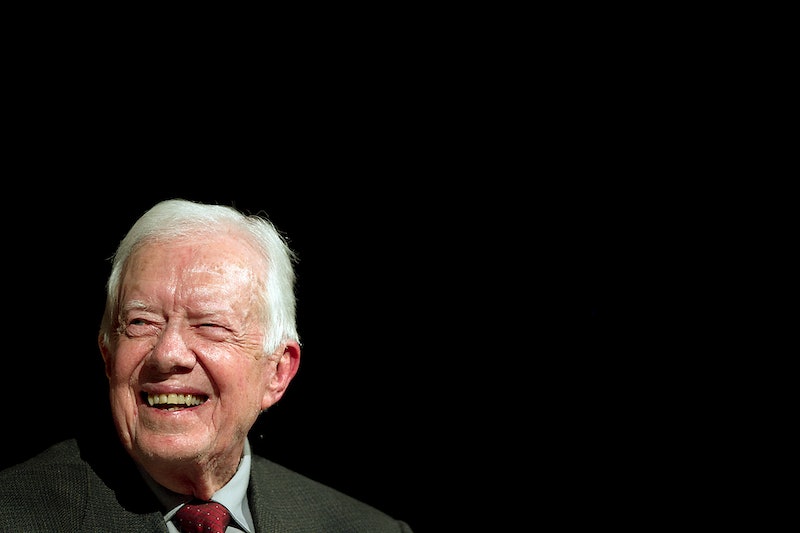 There is no club in the United States more exclusive than being a former president, and on Wednesday, sad news befell one of its four living members. Former President Jimmy Carter announced he has cancer via a statement on his foundation's website, and many took the time to express their best wishes to the 39th president. His time in the White House was limited to just one term from 1977 to 1981, and historians have tended to gloss over his tenure, one marked by the Iran hostage crisis and energy woes. Perhaps a bigger part of Carter's legacy was how he leveraged his post-presidency into real meaningful change on a global scale. What Carter did since he was president, whether in the United States or abroad, has cemented his legacy as one of the greats.

In a statement posted on his foundation's website, Carter said the cancer was discovered during a recent liver surgery procedure. He had elective surgery on Aug. 3 to remove a small mass in the liver.

Recent liver surgery revealed that I have cancer that now is in other parts of my body. I will be rearranging my schedule as necessary so I can undergo treatment by physicians at Emory Healthcare. A more complete public statement will be made when facts are known, possibly next week.

As more details come out about Carter's condition, perhaps it's time to take a look back at everything he's accomplished since vacating the highest seat in the country.

He Expanded Habitat For Humanity

Carter and his wife Rosalynn dramatically increased Habitat for Humanity's global profile after becoming involved with the organization in 1984. Together, they actively fundraised and built homes with the nonprofit group. Every year, the Jimmy & Rosalynn Carter Work Project hosts a "build blitz," during which homes and shelters are built in a different city. In the foreword for If I Had A Hammer, Carter wrote about the nonprofit's profound impact.

The great gift of Habitat for Humanity is that it offers us a way to reach out to fellow humans who don’t have a decent place in which to live. In fact, it's the best way that I know to live out the highest moral values of my faith, because Habitat sees decent housing as a human right.

Through The Carter Center, he worked to eliminate global diseases such as Guinea worm disease, river blindness, trachoma, lymphatic filariasis, and schistosomiasis. The foundation's eradication program boasts reductions of Guinea worm disease from 3.5 million in 1986 to just 126 in 2014, putting it on track to become the second human disease to ever be eradicated in history.

He Negotiated With North Korea — Successfully

He has traveled to North Korea multiple times to successfully negotiate the release of Americans, including journalists Laura Ling and Euna Lee in 2009 and teacher Aijalon Mahli Gomes in 2010. In 1994, he was secretly sent by the Clinton administration to convince North Korea to dismantle its nuclear program. And they did (until George W. Bush later categorized them as part of the "Axis of Evil).

He Joined The Elders

Ignore the cryptic Hollywood-ized name. The Elders is actually an international group of notable public figures brought together by Nelson Mandela in 2007 to advocate for peace and human rights across the world. Carter is one of 11 members in the elite circle, which also includes former U.N. Secretary-General Kofi Annan, former Mexican President Ernesto Zedillo, and Mandela's widow Graça Machel.

He Won The Noble Peace Prize

In 2002, Carter won the Nobel Peace Prize "for his decades of untiring effort to find peaceful solutions to international conflicts, to advance democracy and human rights, and to promote economic and social development." While three other presidents have also won the prize — Theodore Roosevelt, Woodrow Wilson, and Barack Obama — Carter is the only to have received the honor after he left the White House.