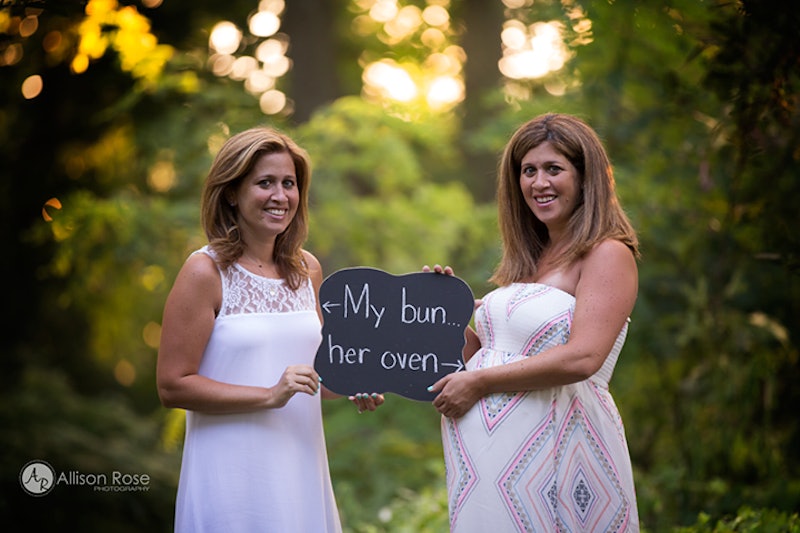 We say we would do anything for our siblings, but very few of us are really put up to the test — at least, not to the degree of these two sisters. After a battle with cancer rendered Allison Ardolino Dinkelacker unable to have any more children of her own, her identical twin sister had a baby for her. In fact, when Dawn Ardolino Policastro found out that her sister couldn't have children, she didn't even hesitate to offer — and now, all those years later, they are the proud mom and aunt of Hudson William Dinkelacker, born on August 5.

Allison was first diagnosed with cancer in 2009 when she was 30 weeks pregnant with her now 6-year-old son, Dylan. Because her cancer was brought on by hormones, doctors told her that she would be unable to have any more children, despite her plans to have a second child. "Well before he even finished his sentence, Dawn jumped in and said, ‘It doesn’t matter because I am going to carry their child,’" said Allison on her Facebook page.

Their journey was documented through a moving photo series by Allison Rose Photography. The photographer recently shared their story on Facebook, where thousands of people were moved by their incredible bond:

Allison has been cancer free now for six years. Baby Hudson not only has a brother in Dylan, but two cousins in Dawn's own children, seven-year-old Jake and three-year-old Ashton.

Dawn knew through most of the pregnancy that she was expecting a boy, so Allison Rose Photography took this clever shot before he was born:

“How can we begin to thank you for the tremendous generosity and sacrifice you have so willingly bestowed these last few months? You have given us not just the fulfillment of a wish we’ve had for the last six years, but a whole new life, and a family of four we thought we’d never have.”

Here is a video documenting their experience below:

Bustle has reached out to Dawn for comment, and will update the article upon hearing back.