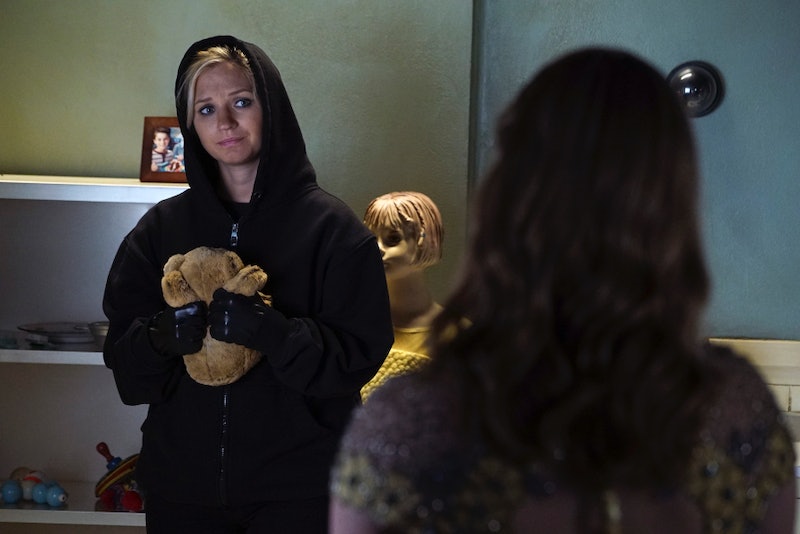 If you're even slightly interested in the teen drama that's captured hearts and minds of all ages, then you probably know that a large chunk of Pretty Little Liars fans were disappointed when Big A was revealed to be a transgender woman, CeCe/Charlotte DiLaurentis. While some fans were upset at the plot holes that appeared as a result of the fact that Wren, suspect number one for many, was not the ultimate villain, for the most part fans were upset at the way the series handled its first transgender character. Making the person who has tortured, chased, trapped, manipulated, and obsessed over the Liars for five seasons a transgender woman and implying that part of the reason she became so unhinged is because she has struggled as a transgender woman was very upsetting to many loyal PLL devotees.

Naturally, my cohost Samantha Rullo and I had to address this topic in Bustle's Pretty Little Liars' Taking This One To The Grave podcast. Not only have we devoted years to this show, but we're so obsessed we record our thoughts each week in hopes of reaching other PLL fanatics. How do we go on when the show has delivered such a blow to its fans? Do we even keep watching Pretty Little Liars ?

Ultimately, the answer is probably "yeah, I suppose I came this far," but as Sam and I explain in this week's episode, it's going to take a lot to win us back as mega fans.

ABC Family has not responded to Bustle's request for comment on the backlash, but I. Marlene King came out in defense of her storyline the day after Twitter full-on exploded with derision for the finale, telling Buzzfeed that she did not intend to suggest that Charlotte became a villain because of her gender identity:

I didn’t want people to think that this person was a villain because of their gender identity ... She was a villain because she came from a very, very crazy family, so genetically she is probably a little crazy too. It was really important to us as a show and to the studio and the network that people took away that message exactly. We didn’t want to go backwards for the trans community, we wanted to go forward.

And while I get that the intent was not to tie Charlotte's gender identity to her villainous streak, the problem is that ultimately, that's not what came across in the episode. And regardless of the intent, at a time when trans representation is only just getting its due in the larger pop culture scope, I (and many other fans) take issue with the notion that even a sliver of a ruthless villain's motivation stems from the pain of growing up transgender.

Still, King continued on to claim that she saw more fans who were mad that a transgender woman was included on the show at all, rather than those who were upset at the way the show handled the trans storyline:

I knew we had so many years to build this story and make it layered and not what it could have been. We were pretty confident we would get a few negative responses — and there are negative responses from people who just don’t want to see transgender [sic] on TV at all ... To be honest, I see a lot more of those than people who were upset about a transgender villain. I think, again, we’re bringing more awareness to the subject and, really, humanizing Charlotte. … I have actually received several tweets and comments from trans fans of the show who loved it. It’s all been very positive.

While King may have taken more notice of the fans who were intolerant of Charlotte simply because she is transgender, there were also plenty of fans and bloggers voicing their concerns with the way the series handled Charlotte:

It's not that King can't write A as a transgender woman, it's more about the notion that the choice to do so is irresponsible, given the landscape of transgender characters in pop culture. Jessica Lachenal makes an excellent point over at the Mary Sue:

The world really doesn’t need another story about a “crazy trans woman.” I promise. Society does that enough on its own. To create stories around this dangerous trope is not only hurtful, it’s lazy. You’re essentially parroting how a lot of people already feel about trans people and preserving the status quo.

And that's the issue. Pretty Little Liars, in making Charlotte the tormentor of the Liars, isn't challenging trans stereotypes, but rather playing into them. Film history is actually full of transgender villains (see: Dressed to Kill, Sleepaway Camp, even Ace Ventura: Pet Detective, which finds its unhinged villain in a transgender woman scorned by her colleagues). The most famous instance is likely Silence of The Lambs famously centered on the story of Buffalo Bill, who sought treatment for gender dysmorphia but was denied gender confirmation surgery and went on a female-focused murderous rampage in order to make a "woman suit" as a direct result.

And while PLL attempted to make the story of a transgender villain more sympathetic than past films have by taking us through Charlotte's past, the episode still included a scene in which Charlotte shows little remorse for extremely violent, cruel behavior. Essentially, Charlotte is still a crazy villain who thinks extreme mental torture and actual torture is fine, as long as the person doesn't die. The only stark difference is that we know, firsthand, what happened in her life that made her feel that way about other people.

One of her important conversations with Ali is as follows:

Ali: You attacked me in my own living room.

Charlotte: You were gonna leave and I couldn't lose you again. I had to make it seem real so you'd pay attention. I'm not a bad person, Ali.

Ali: You almost froze Aria and Spencer to death.

Ali: You drove a car through Emily's house.

Charlotte: Yeah, and I almost cut her in half too. Is she hurt? No. Is her mommy hurt? No. I only got mad when you didn't listen.

Ali: You can't steal people from their families. And lock them up to play like they're your toys.

Charlotte: (To the camera and the Liars) Yes I can, and I did. I know you won't believe me, but I love all of my dolls. That's why you're still alive. (Back to Ali) I would never let anything really bad happen to them. It sucks to kill someone, even when they deserve it.

And the folks behind the reveal don't dispute that Charlotte is troubled. Speaking to E! News, Charlotte portrayer Vanessa Ray explained that while Charlotte eventually became evil, she was not "born evil":

What made her evil was being taught to lie and to cheat and to neglect human beings ... She was neglected as a child. She was not treated with the care and love and respect that any child deserves and because of it, she became someone who neglected humans and didn't see the value in other human beings. Therefore, she could toy with them and treat them like dolls and treat them like they're nothing.

This is all understandable, and while Charlotte says she was misdiagnosed and kept in Radley unnecessarily, I suppose we can use our brains to assess that as another tall tale of hers. And as King later told MTV News,

...when we told the network about this storyline that the villain, the person we understand as the villain, is Mr. D. It’s heartbreaking to watch the bathtub scene, when Charlotte puts Ali in bath — and then the father’s reaction ...

I think Charlotte just happens to be transgender, and I think Charlotte has mental disorders completely aside from that because she comes from a crazy family. She was left at Radley for her whole entire life. So, I think everybody in that family is a little bit crazy to begin with.

However, that still leaves us with a situation in which another trans character is driven to erratic, unhinged, violent behavior, by her family. To say that the entire family is crazy, and that's why Charlotte also has mental disorders glosses over the fact that she undoubtedly grew up with worse problems than her brother Jason and her sister Ali — both of whom have issues but couldn't exactly be considered "crazy." When you look at the fact that the only trans member of this family was treated poorly and reacted by becoming a villain, the story isn't revolutionary at all. It's regressive.

All we can do is hope that when we see more of Charlotte in the time jump that there will be more to the story and that something might explain further what drove Charlotte to become so violent. My podcast cohost Sam suggests that perhaps Sara Harvey aka Red Coat aka Black Veil had a hand in pushing Charlotte to more violent lengths and I certainly hope she's right.

If this show insists on making bringing another transgender villain into the pop culture landscape, hopefully it can at least continue to make this person a complex, layered character.

And for more deep dives into Season 6 of Pretty Little Liars, check out all the past episodes of Taking This One To The Grave: