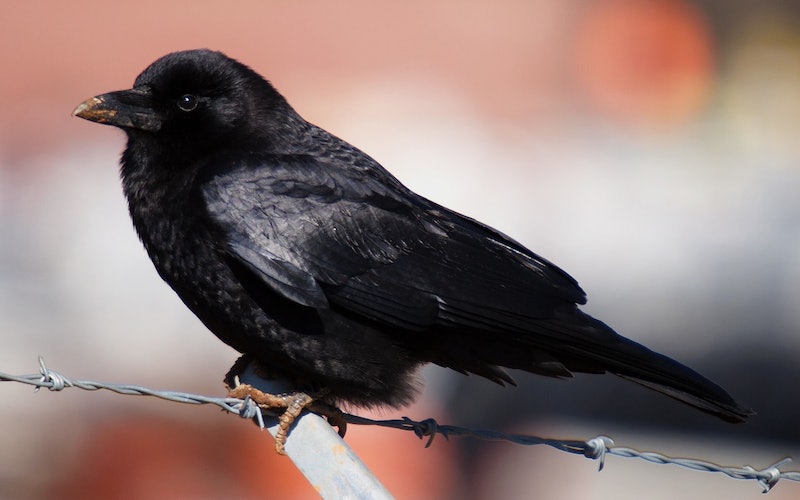 Before you decide on your next tattoo design, why not consider the symbolic meaning of the crow? (And no, I don't mean Jon Snow and company.) The crow's connotations have evolved over the years, and differ from culture to culture as well as person to person.

Ultimately, of course, why we choose to inscribe images or words onto our bodies — be it a crow tattoo or your partner's name — should depend on the design's personal meaning to our lives. For me, the image of a crow summons the memory of reading "The Raven" when I was in grade school. Crows and ravens (black birds that are comparable in their size and sound) are very comforting and nostalgic for me, as they remind me of my longtime love affair with the works of Edgar Allan Poe.

As a young person, I adored his works of poetry and short fiction, and could relate very much to his themes of loss, depression, and his generally bleak outlook on life. The crow became my friend — an old ally who reminded me to contemplate the state of my mental health, my fear of mortality, and my general fascination with all things macabre. It still excites me whenever I see or hear one, and I'm reminded once again to open my collection of Poe stories. Crows stand for many different things based on the person or culture. Here are just some of the things the crow has come to symbolize, giving many options for interpretation for your next tattoo.

1. Omens Of Death And Doom

Many Western cultures consider crows to be a bad omen. The creatures are thought to be the keepers of laws and symbols of the dark and "the unknown." According to Nature Wise, the Irish and English saw them as an omen of death, and seeing a solitary crow was a warning of bad fortune.

The Irish specifically believed that a group of crows (i.e. a murder of crows) seen perching on a tree signified the presence of souls from Purgatory. According to Perspectives Magazine, medieval British society feared crows, due to the "pagan legends (resulting) in demonization of crows and ravens, which were consequently depicted as familiars of witches." It's considered good luck if you spot a dead one, which is understandable based on the general consensus the British came to regarding the dark bird.

2. The Bearer Of Bad News

All the bad juju surrounding crows arguably began for a number of reasons, and Biblical stories and Greek myths about crows haven't helped improve this poor bird's reputation, either.

According to Perspectives Magazine, beginning in Biblical times (and over the centuries) Christians believed crows to be companions of Satan and carriers of damned souls. The bird was thought to have "a special taste for criminals and (enjoyed) plucking the eyes out of sinners." According to Greek mythology and the Mythology Dictionary, on the other hand, the god Apollo punished the crow who delivered bad news to him about a woman he loved fancying someone else by turning the formerly white bird black. This story is one of the many origins of crows being considered the bearers of bad news.

It turns out that not everyone thinks the crow is so bad. The Chinese and Japanese myths portray crows as a loving symbol, and according to a Chinese legend about the three-legged crow (as told by Lloyd D. Graham for Academia.edu), they also represent the sun, as the crow in the story transforms into this celestial body. With this in mind, the crow can also mean destiny and transformation, as many tattoos show a murder of crows transforming from an object (like a tree) into their true form.

Crows are also known for being super clever and are regularly perceived as wise souls. According to Perspectives, Northern American cultures see crows as a sort of spirit guide and at times even a prophetic being. They are seers of the future, who hold all the wisdom and flexibility needed for real change. North American tradition sometimes views the crow or raven as "the mediator between the land of the living and the land of the dead, accompanying the dead souls on their final journey."

As for Edgar Allen Poe, well, depending on your analysis of "The Raven," Poe seems to believe that the creature has come to predict his own death, and that he has perhaps even come speak to Poe as death himself. If you ask me, that is quite a combination of the good and the bad reputation crows and ravens tend to have across different cultures.

Seemingly, crows and ravens are versatile and multi-faceted symbols that can mean something a little different to each individual. The crow ultimately indicates some kind of change, however. Whether that change is good, bad, or somewhere in between depends on everyone's unique perspective. No matter what the crow means to you, though, it definitely makes for a sick and beautifully dark tattoo.