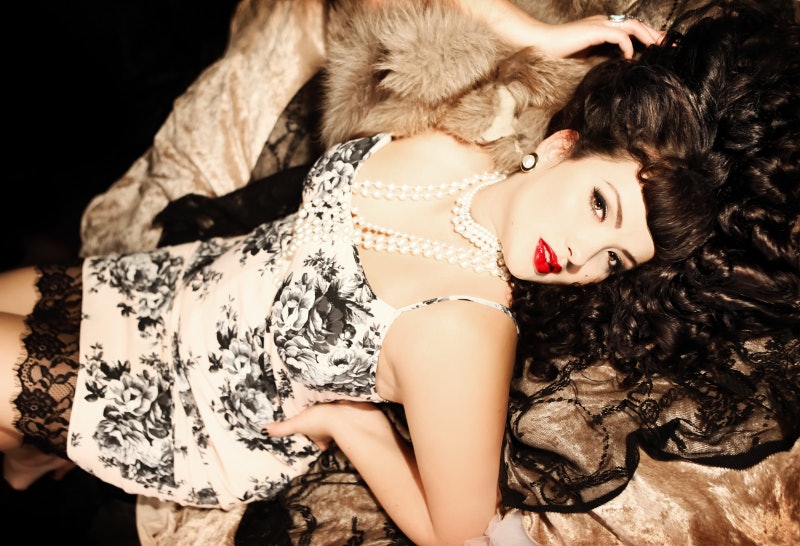 My dad was a teenager of the '50s and a 20-something of the '60s, which meant I grew up surrounded by Marilyn Monroe and Bettie Page paraphernalia. To my dad, these women were the icons of beauty. Being quite a traditional, now 73-year-old, he still tells me that the allure of Marilyn and Bettie was their ability to balance the traditionally feminine aesthetic with the new-age character. They were strong women. They were talented. They worked their asses off.

Even for someone like him, who is far too preoccupied with boats and planes and trucks to care about fashion, the styles worn by these two women, and of the women of the '50s and '60s as a whole, stand out. Whenever we're together and happen to see someone in a full, poodle-esque skirt, it launches him into one of those "back in my day" anecdotes that starts with fashion and tangents off into a dozen other stories about politics and music.

So for my dad (and me, too), that we've been seeing a nod to mid-20th century aesthetics through music, film, and fashion is significant. We're hearing the folk tunes, seeing the cat-eyeliner, and the marveling at the pinup on almost every corner of every city to which we venture. These things aren't just returning like most trends do at some point or another (like '90s grunge, which is trying really hard to make a comeback); they're returning with a force. Bands like Mumford and Sons, The Lumineers, Bon Iver (to name a few) all seem to be going for the "new folk" thing — which is sort of just putting a modern twist onto the folk music that made John Martyn, Paul Simon, and Joni Mitchell resonate with the entire '60s counterculture movement. Even Lindsay Lohan (in the most out-of-place of ways) insisted on rockin' some thick cat-eyeliner for the majority of her semi-pornographic role in The Canyons. But where we've most seen the trend is in fashion. E-commerce shops like Nasty Gal, ModCloth, and Pinup Girl Clothing predominantly specialize in recreating the styles of the '50s and '60s.

Celebs are donning the trends, too. Burlesque dancer Dita Von Teese is a pretty splendid example of a modern celebrity who rocks the vintage looks every single day. How about Katy Perry? The girl knows how to dress like a pinup queen. And New York magazine called Zooey Deschanel "Pinup of Williamsburg" —meaning the quintessential inspiration for the vintage, retro, and indie looks amongst America's subculture.

My question is why?

I've always been obsessed with the trends of these two decades without ever stopping to think why that is. Sure, my dad was absolutely enamored with Marilyn and Bettie, and so I always had that influence. But I like to think I formulate my own opinions and tastes on things based on who I am and not solely on what my parents liked when I was a kid. I definitely love the pinup, vintage look, but because it seems everyone likes it too all of a sudden, I've finally stopped to really think about what it is about these particular decades that so attracts people.

It was this desire to explore and understand the allure of all things vintage (and my inherent love of fashion photography) that led me to schedule a photo shoot with Nicola Grimshaw-Mitchell of My Boudoir, a U.K.-based photographer who specializes in recreating the photography and style of '50s and '60s fashion. Only years ago, she focused on wedding photography, but now the demand for the retro looks is staggering. "At one time, no-one wanted vintage looks for their shoots," she said. "Now its about 60 percent of what I do!"

It was a lot of fun and I mainly spent the afternoon fangirl-ing over Grimshaw-Mitchell's vintage-inspired home. But it also made me realize that I really love getting dolled up. I genuinely find enjoyment in having my hair and makeup not just done, but done in a way that reminds me of the women who I sort of grew up with — even if it was just their posters.

I also found myself thinking about the beauty regimen of these decades, and realizing that it's so fantastically accessible. Although I love '20s fashion, too, not everyone can pull off a bob, and you can't wear sequin dresses all over the place. The beauty and fashion of the '50s and '60s, however, has a simplicity to it. It's not hard or time consuming to put on some eyeliner and red lipstick. Curling your hair isn't that difficult, either, if you have some good hot rollers or are skilled with an iron. And it's the kind of makeup and hair you can rock everywhere no matter the occasion.

As for the clothes, I just can't imagine pinup dresses looking bad on anyone. They hug your boobs and your waist in the most flattering of ways. They have a softness to them that isn't too girly, and they're just fun. And they're all about flattering the curves. As Grimshaw-Mitchell told me about why she so loves the classic styles, "I suit more tailored looks and I love the ladylike feel to vintage!" It's a common thread.

I'm a sucker for femininity in fashion of any decade, but none of it's quite as easy-to-do as that of the '50s and '60s. I know tons of men and women who look at someone dressed quite girly or pinup and assume right off the bat that that woman must be a bit of ditz. It's an unfortunate stereotype that probably comes from Marilyn herself, whose public personality was manufactured to be just that. But there's something empowering about knowing that you can have big thoughts while wearing a big dress. You can look feminine (if that's your preference) and feel sexy, but still be thinking about the latest Murakami book.

What seals the deal, however, is how easy it is to achieve the look. Women who work or go to school every day know there isn't always time to dress your best or put on the makeup that most complements your unique taste. Sometimes we're rushing out the door, and barely have time to brush our hair, let alone style it. But all you need to achieve the Marilyn look is some liquid eyeliner and a red lip, or throw on a pretty dress, and you're basically done. In a fast-paced world where we're all balancing a million different things and have calendars filled until next spring, this is priceless.