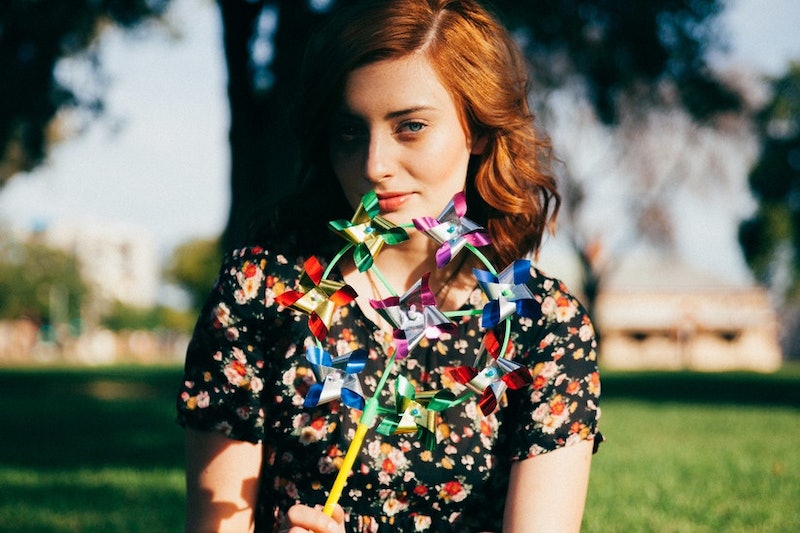 This may be the ultimate DIY. There are a lot of strange ways to orgasm, but unlike the famous coregasm, this one happens without moving a muscle. Well, sort of. "Thinking off" is the way to have an orgasm with only using your brain. It sounds completely bonkers, I know. Honestly, I was pretty skeptical. And the first account of it I read sounded to me, and the author, like it was more of hyperventilation session than an orgasm. And if I wanted that I would just think about my student loan debt. But researchers have found that thinking off can actually create a lot of the same responses as a traditional orgasm. Which maybe shouldn't surprise me, considering how much fantasies and thinking can play a huge role in sex. Plus, nipple orgasms are a thing, and some people even orgasm during childbirth, so why not brain ones?

Also, if you can have an orgasm without making any movement, then I could see my future train and tube journeys as being way, way more fun. I mean, they're pretty much just times for sexual fantasizing anyway, maybe now it can come to something.

Here's what you need to know about "thinking off":

CBS News points out the connection between thinking and arousal, especially for women, goes back to the research of Masters and Johnson. And Dr Ian Kerner says "the brain is the most powerful sex organ", so thinking off seems like a natural extension of that.

2. The Brain Can't Tell The Difference

Barbara Carrellas, the poster girl for thinking off, was actually put in an MRI machine and studied by researchers at Rutgers University. And, as much as it sounds to some like hippie nonsense, science backed her up. The parts of her brain that would light up during orgasm lit up through her thinking off. Boom.

3. It Could Lead To Creating New Erogenous Zones

Mik Scarlet of Mosaic Science made a video explaining how thinking could lead to developing new erogenous zones. The same same relaxation and mental focus used to achieve orgasm can be paired with stimulating an area or the body, to create a new sexy area.

4. It May Be A Great Development For The Disabled

Why would you want a new erogenous zone? Well, for some it's actually really important. According to Medical Daily this process, "which was developed for those with spinal injuries, or paralysis, has given many with disabilities the chance to engage in an active, healthy sex life despite their injuries". Sounds good to me.

5. It Actually Came Our Of A Desire For Safe Sex

According to CBS News Carrellas got involved in thinking off at "height of the AIDS crisis... She saw friends get sick and die on a regular basis. Carrellas says that she wanted to explore alternative ways of being sexual."

6. It Can Involve Kegels

Hopefully you've been practicing your kegels, because they're going to come in handy. When Tracy Clark-Flory at Salon tried thinking off, Carrellas coached her to use the "P.C. muscle, the target of Kegel exercises and much G-spot speculation, to help 'at pulling that energy up'" and achieve orgasm.

7. Some Find It A Useful Addition To Traditional Sex

So all of this isn't to say that thinking off should replace your other ways to orgasm. Carrellas told CBS News that her "definition of what sex is has expanded so that genital sex is just one part of the repertoire". So if you're looking for a way to spice up your sex life with no batteries required, this might be for you.