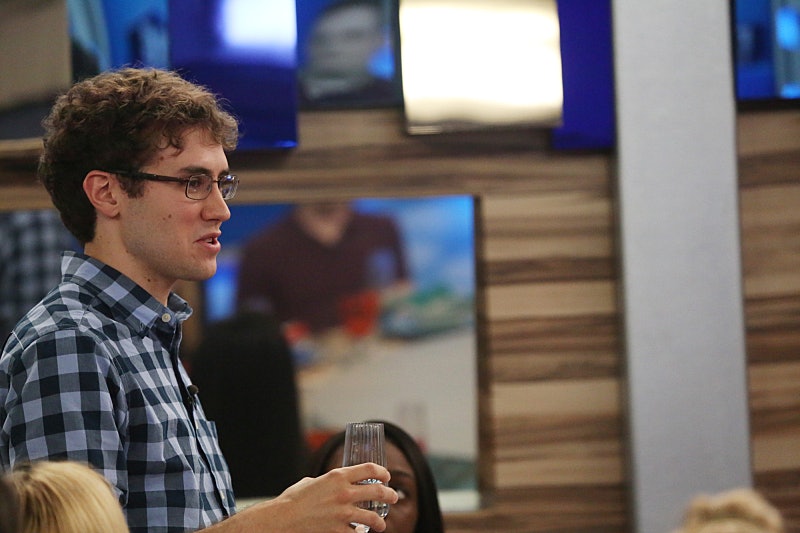 Hey, I have a question that's been bugging me for the last couple of weeks: is Steve OK on Big Brother 17 ? No, really. Over the course of the past five weeks, Steve has been on my radar as someone to watch. At first, I thought it was his Ian Terry-ness. Kind of a "watch out for this guy because he's going to win this game." But then, Steve was nowhere to be seen for weeks. He wasn't even playing the game. Until recently, when Steve's hatred for Becky, nonsensical comments, and game moves have been featured more heavily on Big Brother TV episodes. Which is why I raise the question, again: Steve, are you OK?

I get that this game is a lot to handle. Some people don't have what it takes. I'm starting to think — nay, I'm 100 percent positive — that Steve is one of those people that simply can't handle the pressure of the game. Remember when Steve went on that rant about Becky's misery in losing a Power of Veto ceremony? He maniacally laughed at her for dropping her ball. That was red flag number one. Then the flags started piling up, and all of a sudden, I think I have enough flags for an Independence Day parade.

On Thursday's double eviction, Steve won HoH. He's probably the most dangerous person to have won because no one knows where his head is at. Is he truly loyal to anyone? Who would he bring to the final two? No one knows. Which could explain why he nominated Meg and Jackie. MEG AND JACKIE, you guys. Two people who were definitely not going after him anytime soon. Ignorant me thought this was all part of his plan to backdoor Becky. Joke's on me, because not only did the nominations stay the same, but Steve was actually going after Jackie all this time.

Steve, as usual, was all out of sorts during the live episode. He said he wanted to give Meg and Jackie a reason behind their nominations, but couldn't formulate sentences at the moment. He "needed a minute." You don't have a minute, Steve. This is live TV. Why are you doing this to me, Steve? Why?

Steve knows he messed up by nominating Meg and Jackie, which led to Jackie's eviction. At the end of the episode on Thursday, he was seen doing what he does often, standing in a room alone and talking — sometimes directly to the camera. He asked himself what he had done, and seemed to be pretty upset about the last hour inside the house. You should be, Steve. You should be. I don't know if you'll ever redeem yourself in my eyes, but you can certainly try.