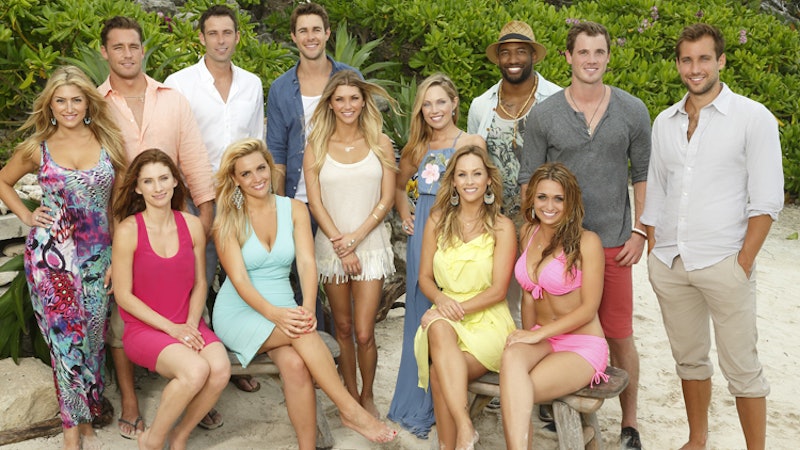 If you've been watching the beautiful trainwreck that is this season of Bachelor In Paradise , you've probably found yourself wondering some variation on "What is the point of this?" "Who are these people?" or "Why do I keep tuning into this twice a week who even am I?" And, while those are all perfectly logical questions that we should be asking ourselves constantly when it comes to BIP, what would you say if I told you that Bachelor in Paradise is actually more realistic than The Bachelor or The Bachelorette?

Wait, why is my face covered in water? Was that a spit take? I'm being serious here!

And I can prove it to you. For all that these spinoffs of the same franchise pretend to be vastly different shows with vaguely different purposes (in that The Bachelor and The Bachelorette have one: marriage, and Bachelor In Paradise does not), BIP is actually a more conducive environment to starting a relationship. As insane as that is. I could give you a lot of reasons for it — and I'm gonna! — but the bottom line is that it's just a more realistic situation, closer to the real life stuff that a real couple would have to go to. (Y'know, aside from the whole being stranded on an island on national television stuff.)

So without further ado, here they are: all the reasons Bachelor in Paradise is actually more realistic than The Bachelor and The Bachelorette. Keep that water in your mouth.

1. The Competition Is Healthier

Instead of it being 25 men for one woman, or vice versa, the numbers are a lot closer to equal, which significantly increases the healthiness of the competition.

2. There Are Other Couples Around Having The Same Experience You Are

Being the Bachelor or the Bachelorette is isolating, and people always talk about how much harder it is than they were expecting, so I imagine it must be nice to be able to turn to someone and just be able to say, "This is the weirdest, right? How are you doing?"

3. You Have To Build Trust

On the original, if you have a great connection with someone, you immediately have to turn right around and watch them do the same things with somebody else. But if they do that to you on BIP, just don't keep them around next week — and that's that! To build a successful partnership, you each have to keep each other in the game instead of one person always holding the power every week in the form of roses.

4. You Always Know Where You Stand

Instead of waiting for people to come back from their dates and just hoping that they'll be honest with you about how they went, you can watch people interacting on the beach or in the house, and take them to task for it if you want instead of getting blindsided at a Rose Ceremony.

5. There's Already Been One Couple To Come Out Of It

And in just one season! Marcus Grodd and Lacy Faddoul got married after meeting on the show, a rate of success not matched in the rest of the franchise.

6. Everyone Lives Together In The Same House

Gone are the days of being sequestered by sex and ending up closer with your fellow competitors than with the person you're supposed to be making a love connection with.

Honestly very, very important to a budding relationship, in my opinion.

So there you have it! Against all odds, you're probably more likely to meet and bond with the love of your life while filming Bachelor in Paradise than by getting put through the wringer by The Bachelor or The Bachelorette.