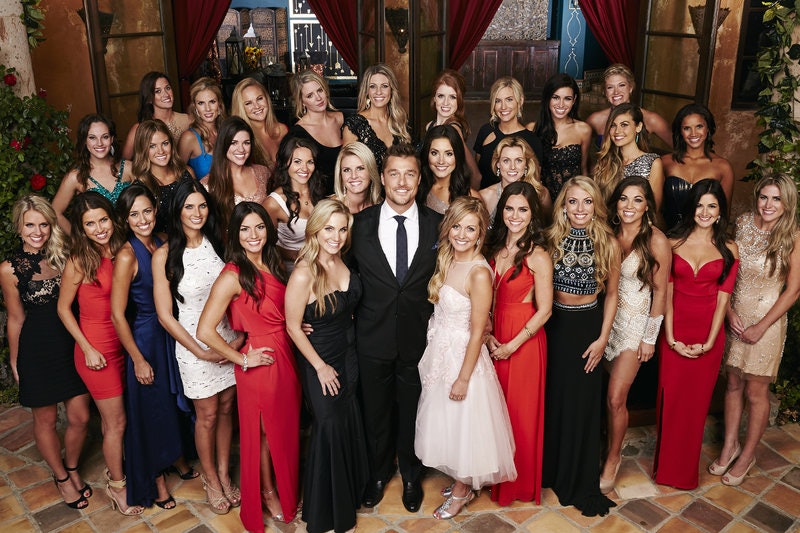 It wouldn't be a season of The Bachelor if the women vying for Chris Soules' heart weren't a little... colorful. Thankfully, this batch of contestants is no different. On Thursday, ABC announced the 30 ladies competing for Chris Soules' affection and from their bios alone I can tell it's going to be an entertaining season. This is the most women The Bachelor has ever hosted, but since Soules is a farmer he knows how to handle a large crop.

But we must remember, this is a reality show after all: not every woman is going to be The One and so there has to be a few wacky ones who show up in a wedding dress, on horseback, or ready to enact some 50 Shades of Grey scenes. Promos for the show are hinting at a pregnancy scare, but what else is in store for the Bachelor and his viewers?

Let's meet the 30 women hoping to walk away a winner and head to Iowa to be a farmer's wife. We can relish the fact that no matter how boring Chris Soules himself might be, the women are sure to bring the drama and the hilarity.

She's your pretty standard 24-year-old who loves puppies and has a fear of running into her exes while on a date. And she's a pretty intense Facebook stalker (aren't we all?) who once wrote a long message about her findings on a new guy only to then send it to him instead of her friend. She's not one of the crazier women on the surface but admitted that she admires a horse's "loyal[ty] to their herd" so perhaps she'll stir up drama by siding with the women against Chris at some point.

Amanda's views on romanticism could bring about some interesting events. When asked about the most romantic gift she ever received she said it was the time a guy wrote "a beautiful letter expressing his feelings for me." Then she went on to reveal that "he was a creep." I don't know about you, but the creep factor on things tends to outweigh the romanticism for me. But Amanda sees things differently. Here's hoping for some creepy romantic gestures on her part!

Amber says she can't live without her teddy bear or her mom. I'll let you decide for yourselves whether that's sweet or a little childish.

I love the look she has going on in this photo. I can practically hear her saying something like, "Are you serious? If I win, do I have to move to Iowa?" I feel like Ashley has a lot of personality. Just from reading her biography I learned that she once tried to be a cougar (which is only slightly concerning considering she's also a nanny). She says the date totally backfired and she basically became his sugar mama instead. "He was sooo immature and had me pay for everything," she says in her profile. "He was too intimidated to hold a conversation."

This hairstylist's favorite movie (not even television show!) is Sex and the City. I bet she's totally a Charlotte looking for her Prince Farming.

Bless Becca's heart because her worst date fear is the very specific: "Having stomach issues and clogging up a toilet, a la Dumb and Dumber." Also, one time a guy asked her what kind of gas she likes, as if that's a totally legitimate question. Hopefully she'll answer it this season because I am just dying to know her thoughts on diesel.

Bo isn't crazy (I mean she could be) but it's crazy that she's on the show at all because she's a plus-sized model, which I'm pretty sure is a profession never before included. We've had jumbotron operators and free spirits, but prior to this season it's been all conventionally skinny women, all the time. Bo is a surfer when she's not modeling and once made it "in the top 12 on the Women's World Qualifying for surfing." Dang.

Britt must be really good in interviews because she totally knows how to turn a weakness into a strength. When asked what she would be sad to never do she answered "step outside my comfort zone." While some women would never want to give up shopping or eating, Britt's answer lets everyone know that she likes to challenge herself. I hope they send her on one of those scary dates where you have to jump off a cliff, or something. She needs to prove her dedication to stepping outside her comfort zone.

She's a "WWE Diva-in-Training" which means she's learning to be a wrestling performer or one of those women who walks around the ring holding the round number. Apparently the WWE uses the term "diva" to describe any female working for them from wrestlers to interviewers to managers. I'm pretty offended about that and also pretty sad that "diva-in-training" is an actual position and not just a made-up job title like Free Spirit. But I'm sure Brittany will bring plenty of drama to the show like "peeing while still being attached to a microphone," which is one of her most embarrassing moments. The Bachelor producers are gonna love you, girl.

She's a pirate-watching cruise ship singer. No, seriously. Carly says on a recent cruise, "I had to be a pirate watcher from midnight to 4 a.m. in the Red Sea on my last ship. (Yes, you read that correct... actual pirates, not Captain Hook.)"

All of these women have very simple date fears. My fear is always that, like, my date will rape and murder me. Jade is just worried about "having to tell someone there's no chemistry." So I guess even if she doesn't like Chris she'll stick around out of fear of dumping him?

"If I never got to eat, I would be very sad," she says. No, Jillian. You would be dead. But she gets props for also wanting to be Iron Man. Who doesn't want to be Iron Man?

This 24-year-old says she hates it "when my date smacks his food!" At first I thought she meant like literally taking his hand to his meal, but then I realized she basically doesn't like loud chewers. Hopefully Chris doesn't smack his own food in either capacity. Jordan also wants you to know that she's down to get sexual. The craziest thing she's ever done involved jumping naked off the back of a boat and she loves making an impression on a guy with her sexy dance skills. "It would turn him on and hopefully lead to more," she revealed. Maybe Chris is into that kind of thing, who knows? Just as long as he keeps his smacking to sexual playtime in the bedroom.

Juelia is all about those gender roles, saying she loves "[to] shop of course...I am a woman. :)" Help.

If Kaitlyn won the lottery she would "buy an island and make it into a land of pirates." She can hire cruise ship Carly to be the island's pirate-watcher since she already has experience. Oh, bonus! Kaitlyn is naming this island "Yarrrland."

This high school soccer coach says she can't live without "Mountain Dew, cookies, her family, writing, and Jesus." Hopefully not in that order.

Kelsey's favorite movie is Mean Girls and I was like, yeah! But then she followed it up with this disclaimer: "[It's] great to psychoanalyze." Hopefully Kelsey doesn't also over think real life as much as she does cult classics because then she'll be her own worst enemy this season.

Kimberly seems pretty normal on paper. A yoga instructor who graduated college with honors. The Shawshank Redemption is her favorite movie. Maybe she'll be Chris' soul mate. Or maybe on-paper perfect will turn out to be bad news in person. I'm reserving judgement on her for now.

She loves Mila Kunis and Mean Girls and that's nice. But also seems a little shallow because her worst date fear is that he'll smell bad. I mean B.O. sucks, but that doesn't seem like the end of the world. Besides, Chris is a farmer. If they get married, he's probably going to smell like manure a lot.

She has a lot of potential to be a night one mess since admitting that on a date she once got a little too drunk and her date "watched [her] throw up in [her] purse." I mean, we've all been there, but since The Bachelor always has a few crying drunk girls on the first night, Megan might end up reliving the purse-puking night.

She's a wedding cake decorator and is very romantic. Her ideal date would be "a surprise trip to Waikoloa (Hawaii), a luau, a helicopter ride over volcanoes, and watch the sunset on the beach." Here's hoping ABC gives her the opposite of that to throw her for a loop. Michelle strikes me as pretty un-feminist which I always find hard to watch. I know Chris is looking for a homemaker, so she might be good for that since this is the way she impresses a guy: "Laugh at his jokes to make him feel funny, and ask him questions about himself to make him feel special and show I'm interested." Girl, you can impress a guy by being yourself too, I promise.

If she could be any animal, she would be "a wolf. They are magical and bad-ass creatures." I like you, Nicole.

This former NFL cheerleader is now a model. Fingers crossed she's not as crazy as Courtney Robertson was on Ben's season. Or, for the sake of TV, let's hope she is.

And now, my favorite profession of the season and maybe ever: cadaver tissue saleswoman. Oh, you know, I just dabble in selling the flesh of dead people. Unfortunately those cadavers may have influenced Reegan a little too much because she thinks the best way to impress a man is to play dead. "I'd keep my mouth shut. :) Seriously, I think just being supportive and listening to what they have to say works best," she said.

She is there to marry Chris and even hinted that while she's a city girl, she could totes become a country girl. "Eventually the country might be better as it may be a better environment to raise a family," she made sure to mention. Marriage and family on the brain? She better get to know the Bachelor before naming their kids!

Sandy is 5'11'' and really into music. "I love blues, rock, pop, oldies, country, and jazz! I even listen to some French rock," she said in her bio. "The song just has to build. I love moments in music—it needs to have a climax!" I wonder if she'll end up comparing music to her Bachelor journey at some point. "Our relationship is building just like a song!"

Tara has a twin and once used her sister's passport to go to a different country. If she marries Chris, she better keep her sister far away because if their likeness could fool the TSA, Chris doesn't stand a chance.

Her biggest date fear is "eating something that gives me 'di-di.'" Did she just abbreviate diarrhea? Can she not?

Why are more women not afraid that their date will take advantage of them? Is ABC censoring their answers because come on, Whitney, you surely must be afraid of more than just "spilling [your] drink." Whitney is also a fertility nurse so maybe the baby scare the commercial hinted to is just a pregnancy test she forgot to leave at the office. I expect a lot of jokes will be made at the expense of her job.

This is certainly a unique crop of women. Some are pretty normal, but the good news is that there are plenty of interesting women to keep the season entertaining. The drama begins Jan. 5, so get excited!