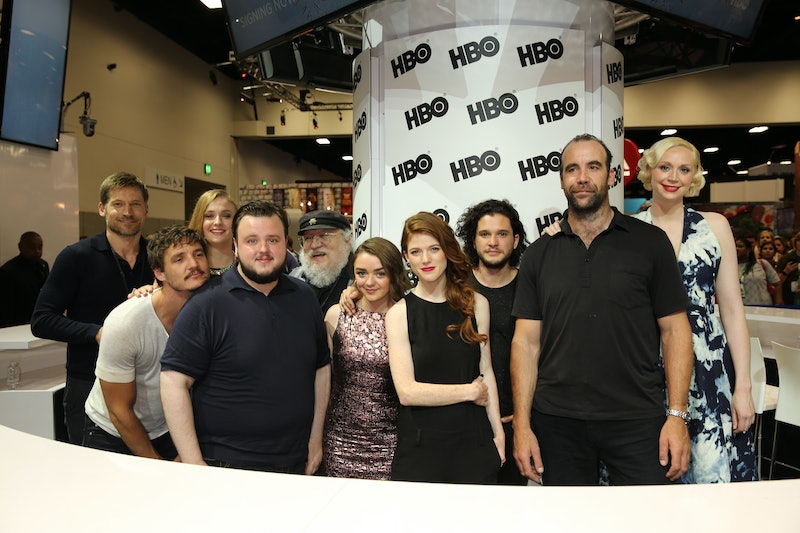 It feels like it's going to be a lifetime before Game of Thrones returns to our television screens. After last season's harrowing, tragic finale, I am both eager to find out what happens and wondering if it's best that I just continue to live in the delusion that Jon Snow is alive and well. Maybe if I just re-watch the earlier seasons I can forget all of the tragedy of this past one... no, wait, nevermind. That is a terrible idea. Ned Stark's beheading and the Red Wedding are best left deeply surpressed in my memory. In any case, there's a Thrones-shaped hole in my TV show rotation and that makes me about as grumpy as Tyrion without a glass of wine. The only thing that might fix it? Photos of the Game of Thrones cast before the show began.

A reminder of what they used to look like is necessary. The cast of Game of Thrones have all become so synonymous with their characters, I often wonder if they'll be able to break away from the show once it has come to a close after seven seasons. Gwendoline Christie aka Brienne of Tarth aka my hero is already wedging herself away from her sword-wielding character by joining the new Star Wars saga. Emilia Clarke and Kit Harington have also started popping up in big Hollywood blockbusters while Jack Gleeson (King Joffrey) has already put the whole acting thing to bed. If you're anything like me and have a hard time separating the Game of Thrones actors from the roles they play on the show, here's photographic evidence that life did indeed exist for them before Game of Thrones. Take a look:

Before he was the World's Favorite Booze Hound Tyrion Lannister....

Peter Dinklage was all over film and television in memorable, albeit smaller roles including Miles Finch from Elf and Marlow Sawyer on Nip/Tuck.

Headey hasn't always been the most vengeful mother in all of Westeros...

Headey has been in the acting game since 1993. Here, she rocks the big hoops and swept bangs like any woman of the early '00s would.

It seems like the Mother of Dragons has always had a flare for otherworldly parts:

Here she is in 2010's Triassic Attack, a TV movie about dinosaur fossils that come to life and attack a small town.

Broody McBrooderton aka Jon Snow has ALWAYS known how to stare longingly.

Just look at this precious headshot!

Poor Sansa, always the bride and never the bridesmaid.

If you thought Arya's big sis Sansa was cute, just wait til you get a load of this:

Are you dead yet? I'm dead.

Jaime Lannister, the guy everyone hates to love!

But I guess you can't hate a guy who once was a (sexy) war hero in Black Hawk Down.

There's karma, and then there's whatever happened to Theon Greyjoy. Allen has had that almost-always-crying face from early on in his career:

He's such a sad wee lad in Elizabeth.

I always knew I couldn't trust Petry Baelish! But Gillen didn't start his career as a villain.

Look at him just casually sipping OJ on Queer as Folk!

Brienne of Tarth may actually trump Tyrion and Arya for the best character in the whole damn series. I MEAN LOOK AT HER.

She has always stood above the rest. Case in point: The Imaginarium of Doctor Parnassus.

Margaery is a complete sass-pot and I love her all the more for it.

Check out Dormer keeping the puffy wigs and petticoats away in 2005's Casanova.

Samwell Tarley, the kindest, bravest soul in all of Winterfell! He's thankfully always been that way. Look at him in the days of yesteryear.

Look at him on the TV show Borgia!

It's hard to imagine any of these actors as anyone else other than the characters they play on Game of Thrones... let alone be actual human people. Gwendoline Christie is forever Brienne of Tarth in my heart, and that's just the kind of world I want to live in.