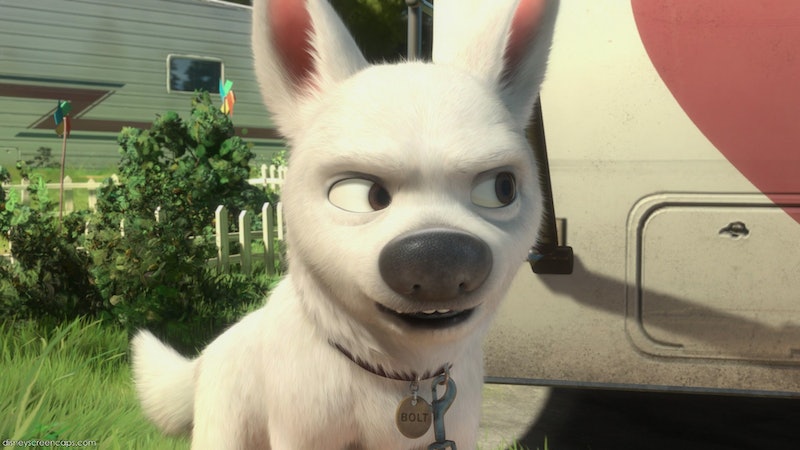 Have you ever gotten a hankering to watch a fun family film about man's best friend — and then gotten three-quarters of the way through only to have the dog die in the movie, causing you to end your evening weeping into a pint of Ben and Jerry's? I can't even tell you how many times that's happened to me, where I'm watching what's supposed to be a PG or PG-13 movie when, all of a sudden, it takes a turn and I'm silently sobbing next to a 9 year old. Seriously, aren't there any movies about dogs where the dog doesn't die?

A dog or a family pet dying is one of those things that cold-hearted producers sneak into films when they want us to feel something, not realizing that, for some of us with hearts that are all-too-tender, it could ruin our entire night and send us spiraling down memory lane, only to fall asleep while crooning at old photos of the childhood miniature schnauzer that slept in our bed every single night growing up and just died this March and we miss every day. (I'm not crying, you're crying.)

But this isn't about me and my sweet little baby Einstein; it's about us and our needs. Which is why I've put together a list of dog movies here that are safe for you to watch. Without delving at all into the world of spoilers, I can promise you right now that none of the pups in these movies die. There are a couple times where it might seem where one has, but it's just being used for dramatic effect and everything turns out all right. There's not much I can swear to you about life, but I swear to you that no furry friends meet their ends in the following 12 films.

1. The Adventures Of Milo And Otis

You're 1000 percent safe to watch the ups and downs of these unlikely friends' (a cat and a dog!!!) after straying from their farm in Japan and getting lost.

Stream The Adventures Of Milo And Otis here.

I don't want to spoil the movie, as the entire plot of the first film is that the Newton family's veterinarian wants to kill their St. Bernard, Beethoven, but I gotta — Dr. Varnick doesn't succeed. And here's the even better news: the entire series is safe to watch, as Beethoven slobbers his way safely through it all.

As gratifying as it is to watch Lassie come through all the trials and tribulations of protecting Matt Turner in this movie, be really careful with remakes before and since, because they often kill off your favorite collie.

The full series of this stray golden retriever who can inexplicably play sports is safe to watch, so feel free to suspend your disbelief as he's invited to join his human pals on the field, court, diamond, and beyond.

This tale of three pets who get left behind on vacation and follow their owners to San Francisco will scare you a couple times into thinking that Chance, Shadow, or Sassy don't make it back, but the movie ends with them safe and sound, I promise.

This pup, voiced by John Travolta, is an actor on a sci-fi action show who thinks he has real-life superpowers and sets out on a cross-country adventure accordingly. But, even though he turns out to be wrong about his magical abilities, he makes it through relatively unscathed. Phew.

7. The Truth About Cats And Dogs

Janeane Garofalo plays a veterinarian and radio show host, who does a segment on pets and who asks her supermodel friend to impersonate her when a listener wants to meet up. It's a romantic comedy about humans where dogs figure prominently, and, happily, they all live to bark another day.

Stream The Truth About Cats and Dogs here.

When all else fails, you can usually count on Disney to get the dogs through the movie alive, which they did handily in this romp wherein a Miami dentist, played by Cuba Gooding, Jr., inherits a team of sled dogs. (Of course.)

You'd think that most animated movies would be safe, but not All Dogs Go To Heaven, so be on your guard! But Oliver the cat and all of his furry Dickensian cohorts pass the "are you alive" exam with flying colors, so fear not.

It would honestly be cruel to kill off a pooch in a movie where two animals kiss while eating the same strand of pasta, so I'm relieved to tell you that they don't.

Stream Lady And The Tramp here.

When a pair of children are kidnapped, a stray dog named Benji seems to be the only one around town with any clue where they've been taken, so he works tirelessly for their safe return. And is rewarded by surviving the movie, thank goodness.

A mockumentary set at a national dog show with a colorful cast of characters. God bless you, Christopher Guest, for giving us a hilarious movie with dogs at the forefront where we can laugh without worrying about crying.

There are probably other movies out there that are safe to watch, but, if you value your sanity (and your salinity from losing all those tears!), you should probably stick with these ones — or run the risk of ruining your whole movie night. Again.