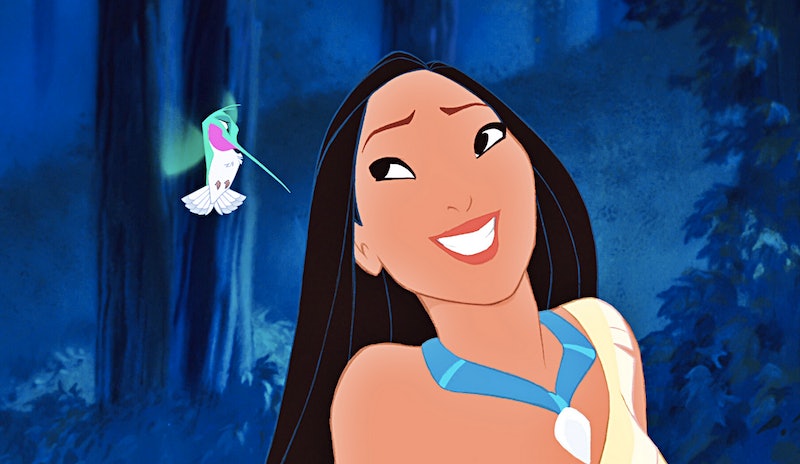 To be fair, viewers probably don't look to Disney movies for historical accuracy. Like, if Disney princesses were historically accurate, it would make some of the animation and costuming way more complicated. But if emphasis on accuracy was the case, then yeah, Disney movies are pretty historically inaccurate — not to mention, like, real-life inaccurate. How many times have you noticed an anthropomorphic animal in a Disney film, or people breaking into perfectly choreographed song and dance? THAT'S NOT REAL LIFE.

That said, Disney movies and children's literature are in some ways great opportunity to teach kids some things about history and to empathize with others. Case-in-point: My first exposure to Greek mythology was in Hercules. Movies like this are entertaining, for sure, but they could also supply some exciting, teachable moments if they got just a few things about the history of whatever time period they're set in right.

There are some glaring inaccuracies and egregious oversights in our favorite kids' films. Sure, many of them were to make the stories more palatable to young kids, and more fun to sing about, but a lot of the mistakes are just oversights that would not have drastically changed the movies for the worse if they were historically accurate. Here is a tour of some of the most historically inaccurate things in Disney films.

6. Beauty And The Beast

For starters, all the townspeople singing "bonjour!" would not be happy in 1700s France, which is the story's setting. Belle sings about her "poor provincial town" and makes no claims that it is a prosperous place. And if this is the case, the townspeople would actually be pretty worn down. The situation in French towns was so bad in this era, in fact, that it lead to that little thing called the French Revolution! As David Palmer points out at Profascinate, the average lifespan was 36 years during this time period — so sadly, Maurice wouldn't have lived long enough to be the adorable wrinkly inventor that he is. (Also, the literacy rate was so low that Belle likely wouldn't have been able to read. Sorry.)

The movie left out the part of the Hercules myth in which he killed his wife Megara and their three children. That would have made for a great musical number with the muses.

This movie takes place in the middle east, but is full of Indian architecture and iconography — the palace, for instance, looks more like the Taj Mahal than anything you'd find in actual middle eastern countries. Also, the timeline is all thrown off: The position of "Grand Vizier" was not established until the Ottoman Period, and Jasmine and Aladdin couldn't have overlooked the Egyptians building the Sphinx while on their magic carpet ride, because the Sphinx really wasn't built until decades later.

This one angers architecture fans everywhere — but, like, only architecture fans. Movie Mistakes pointed out all the errors, many of which have to do with the architecture of the cathedral itself. I mean, I've never seen anyone yell at their screen, "Trapdoors weren't used on scaffolds until the 18th century!" or "In this period, statues were polychromed, rather than made of stone!" ... but it is true.

This movie is just rife with historical inaccuracy. Take You To The Picture Show analyzed all the anachronisms. First of all, the Chinese poem on which the film is based was written between 386-534 C.E. But the film talks about the Imperial City where the Hun leader was heading to assassinate the Emperor of China — which didn't actually exist until the early 1400, and was the seat of the Ming and Qing Dynasty, not the Emperor of China.

First of all, Pocahontas is drawn as a fully-grown woman, when in reality, she was about 11 years old when Jamestown arrived. And while she decides to stay with her family instead of move to England with John Smith in the film, the movie (and its subsequent sequel) fails to mention that she was later held captive and married off to an Englishman named John Rolfe. She lived in England until died at the age of 21 from what was most likely tuberculosis.

Also, though the English settlers see the error of their ways and become friends with the natives at the end of the movie, this wasn't how it went in in reality. Sadly, European colonists opted instead to kill 90 percent of the native population.

Historically accurate Disney movies would be different, yes. But they would also be helpful in preventing kids from feeling like they just learned Santa Claus isn't real when they learn the truth in history class.