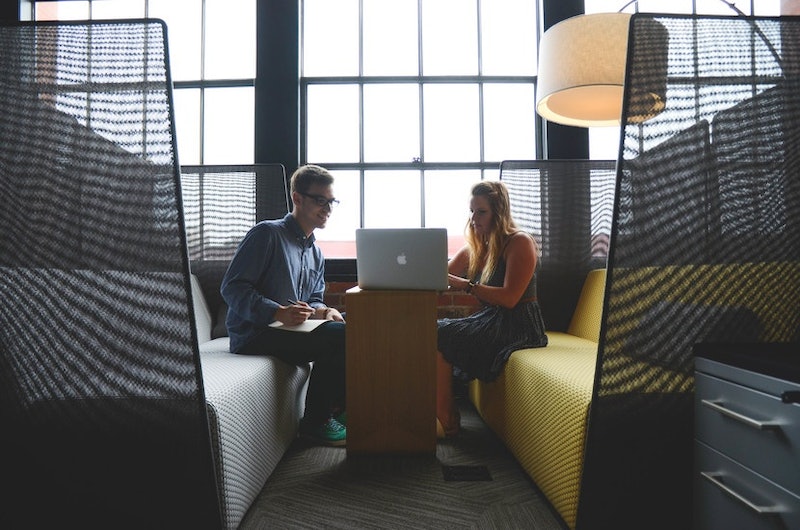 Ah, the power of networking. When searching for the secret to landing your dream job, people often say networking is key. But figuring out how to network effectively without being totally fake seems almost impossible sometimes. The benefits of networking are usually drilled into our heads right along with the notion that the whole thing seems just a little superficial. It's true that a surface level take on networking totally looks like a roundabout way to butter people up with rehearsed lines and mannerisms for each person to cater to their own agendas. All that fakeness isn't pleasant, and can be an intimidating thing to navigate.

But the thing is, we need networking. As millennial career expert Jane Miller pointed out on her blog, Jane Knows, "...knowing someone who knows someone is the best way to get your name and resume to stand out." Like many of her peers, Miller said she's more likely to review a contact recommended by an acquaintance rather than a stranger.

OK, so yes, networking is necessary — and definitely not all bad. If you type something along the lines of "networking advice" into your search bar, you'll be hit with an overwhelming amount of tips, tricks, dos and don'ts from some of the most well-seasoned career experts and professionals. Between remembering all that and calming our nerves, it can be hard to switch off that auto-pilot mode that prevents us from being ourselves. As someone who has been to a ton of career boot camps and workshops, I've eventually learned some ways that have helped me master all that great advice and still keep it real.

1. Be Aware Of Body Language

We all want to make a good impression, but not all of us have been blessed with the suave swagger that is Don Draper. When I’m nervous, behind my somewhat terrified smile, I’m usually wondering if the person I’m speaking with can notice how profusely I’m sweating, if my lipstick is smudged, or whether or not my eye is doing that weird twitching a little bit. Practicing effective body language techniques with some tips from the professional pros is an amazing way to project confidence and communicate positively even if we’re super nervous. Here are some of the best body language tips and tricks.

One of the first things that indicates interest, active listening, and credibility is eye contact, according to AJ Harbringer, contributor to The Art Of Charm, a site aimed at helping people succeed in work, relationships, and networking. How annoying is it speaking with someone one-on-one who's scanning the room, looking down at their phone, or listening to someone making a speech who hasn't looked up from the podium once?

Communication expert Lisa B. Marshall, host and creator of The Public Speaker podcast, stressed that eye contact builds trust between people. It's important to find a good balance between direct eye contact and indirect. So how do you gauge the amount of eye contact you hold? Marshall suggested mirroring the other person's eye contact frequency. This way you'll ensure you're both at an appropriate comfort level that will make for a more effective conversation.

It's been referenced again and again and for good reason. Social psychologist Amy Cuddy's TED talk on how body language shapes who you are gave such valuable insight on what's called "power posing" (standing in a posture of confidence even when we don't feel confident). She explained that in the animal kingdom, expressions of power and dominance are all about expanding — you make yourself big, you stretch out, you take up space, you're opening up. And when we're feeling powerless, we do the opposite and close up. So uncross those arms, open up that chest, stand tall, and widen your stance — you'll appear both welcoming and confident in conversation.

When widening your stance, think about your feet. Author and behavioral investigator Vanessa Van Edwards suggested an easy way to show people you are interested in them is to point your feet toward them. It may sound like a weird and futile thing to think about, but the brain actually registers feet subconsciously. Plus, this will naturally position your body and your head toward the person.

Use The Power Of Touch

As business coach Carol Kinsey Goman, Ph.D explained in a Forbes article, touch is the most primitive and powerful nonverbal signal; we naturally feel closer to someone who's touched us. People will react by being more open and friendly, which makes engaging in conversation way easier. Of course, keep it strictly professional, folks. Save the hugs for happy hour with your friends. We're talking about handshakes here. Make it a point to shake the hand of everyone you meet. Bonus points if you shake their hand when saying goodbye. Goman also points to a study on handshakes by the Income Center for Trade Shows that shows people are twice as likely to remember you if you shake hands with them.

2. Be Selective (aka Quality, Not Quantity)

Networking is like dating, (in a non-creepy way… just roll with me on this one). You don’t want to be that person who has like five dates lined up and is spouting out the same cheesy pick-up line to every guy or girl. Similarly, at a networking event, make an effort to approach only the people/companies you have a genuine interest in. Do some research ahead of time to learn more about what type of people you would like to connect with as well as what professional field. This will naturally make for more authentic conversations and more memorable impressions because you aren’t spreading yourself super thin because trust me, people totally notice that stack of business cards you’ve been racking up all night.

This may also be as big of a no-brainer as making eye contact, but let’s face it — striving to make a good impression while also getting a handle on our nerves and working hard to look engaged in conversation makes it easy to forget to actually listen to what the other person is saying. Plus, according to Paul Reber, a psychology professor at Northwestern University, in an article for The Atlantic, while faces and other facts are important, "the name is both completely arbitrary and somewhat familiar (for common names) and ends up neither connecting to what you already know nor standing out as unusual."

Trust yourself a little more. You look great. Just remind yourself why you are there and why you are speaking to this person. Listening will actually take away a lot of the stress that comes with feigning interest, plus it’ll obviously just come across as more genuine. And you can impress them with some follow up questions. Which leads us to…

4. Ask Questions You Actually Want The Answers To

As founder of Destination Innovation Paul Sloane wrote in an article for Innovation Management, questions are the best way to gain deeper insights and develop more innovative solutions. Great. But it’s also about asking the right questions. Try to avoid asking something you could have easily looked up about the company or position you’re interested in online. You’ll make a better impression on hiring managers and recruiters if you ask thoughtful questions that show you were listening and actually want to learn more. Plus, you’ll actually walk away from the conversation with some valuable information that will help you move forward. Win-win situation. Instead of asking, "Are you hiring?" ask questions like, "What's one thing that would make an applicant for your company stand out? What unique skills are you looking for?"

5. Make Sure To Follow-Up

According to YEC Women, an organization that mentors successful female professionals, in an article for Forbes, if there’s one networking mistake to absolutely avoid, it’s forgetting to follow up. If you don't follow up, those wonderful connections you've made probably won't go anywhere. Some of the most valuable connections I maintain today have been established through following up. I'm constantly being notified of opportunities, receive some great professional advice about specific industries, and scored a job through one of those connections.

Following up is pretty much what distinguishes a real connection and a fake connection. As incredible of a lasting impression as you may have made, in the networking game of meeting different people, it's easy to lose track. On both ends. Isn't that the point of a connection, anyway? Why even bother if you're not going to stay in touch? Even if it's not necessarily the connection that will get you that job that you want at that very moment, it can give you so many other valuable things like expert advice or even an unexpected opportunity in the future.

Whether you have your dream job already or you're trying to make the right connections to find that job, networking is a part of life — so you might as well make the most of it, right?