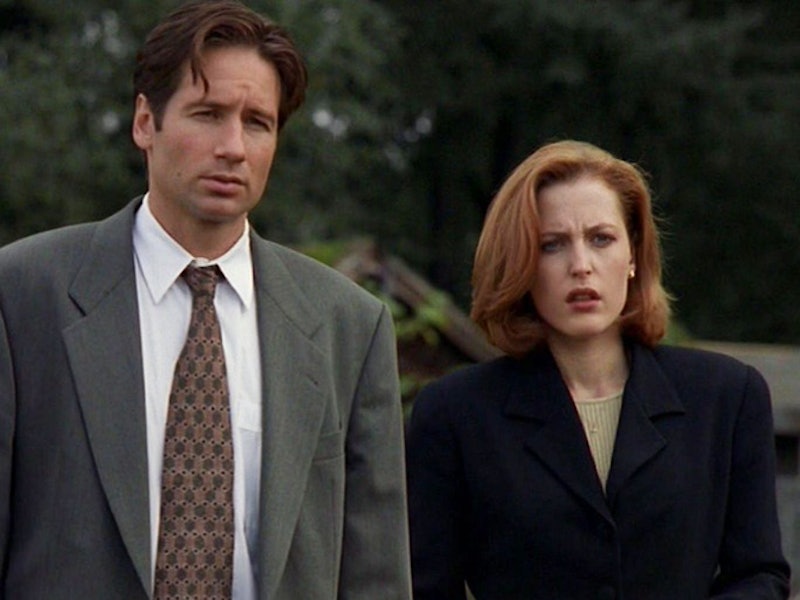 I'm just going to go ahead and cut to the chase here: The X-Files were the highlight of the '90s, in my book. The series had it all: a government conspiracy, drama, little green men, an intense slow burn relationship with a couple that are basically still my OTP to this day... I could go on and on. And while the last two seasons of the show weren't nearly as good, for the most part, it gave me life as a teenager and it still holds up to this day (something I know because I basically just rewatched all of Season 4 — aka the best season of The X-Files — a few weeks ago). Still, when I said goodbye to Mulder and Scully back in 2002, I was pretty content with it being for good. We'd had a wonderful journey together, but then it was over and that was OK — I mean, there's always fanfic if I get desperate, right? That's why the news that Fox was planning an X-Files reboot was so bittersweet for me: on one hand, the chance to see Mulder and Scully again was an attractive opportunity, but on the other hand... really?

I should say right now that there's no way I won't be camped out in front of my TV once the X-Files reboot premieres in January 2016, but I feel like I've been on an emotional roller coaster ever since the news broke a couple of months back. How is it possible to have so many mixed emotions about a TV show? I don't know, but I do. Here are the 7 stages every X-Files fan — every one that's like me, anyway — must be going through in the period leading up to the reboot's airing.

We get to see Mulder and Scully again? Yay! It's been too long! The 2008 movie, I Want To Believe, was largely disappointing, but it gave my 'shipper heart life with all the M/S goodness, so I was at least on board for that. Having them back on my TV screen seems like an amazing prospect. I've missed them so much!

Wait, really? It's 2015. The X-Files has been off the air for 13 years. It was a series that was VERY of its time, and it's not as though the last movie did all that well at the box office. Why on earth did Fox greenlight this? Is the nostalgia thing really that strong? I mean, I'm happy, I just don't get it! I suppose you're not supposed to look a gift horse in the mouth, however...

The first pictures of David Duchovny and Gillian Anderson filming the reboot on location in Vancouver started coming out and the first thing I noticed is how wrong Scully's hair is. I mean, shoulder length strawberry blonde with a center part and weird barrel curls? Since when? If they can't even get Scully's hair right, how can they get anything else right?! Oh no, is this going to be a disaster?

Duchovny and Anderson know these characters. They played them for years, and they love each other and know the fans are dedicated, so they can pull this thing together, right? I mean, it's only six episodes — maybe it's going to be really good! Maybe I'll get used to Scully's new hair. Yeah, maybe!

Uh, seriously? They're really writing the reboot with Mulder and Scully having broken up? How is that a thing? We all know there's nothing that can tear these two apart. Hell, not even being abducted by aliens or having your relatives murdered because of your work was enough to do it, so what's all this about? I'm NOT feeling that.

Oh great, and they're bringing Monica Reyes back. Nothing against Annabeth Gish — I'm sure she's a lovely woman and a great actress — but Reyes was kinda the worst. What's she going to do, help Scully through her breakup with another whale sounds CD? This is just going from bad to worse.

Sigh. This thing is happening, so we'd might as well just learn to deal with it. It might actually turn out to be OK. At least if they're smart, they'll put Mulder and Scully back together by the end of the series run. It remains to be seen, but I suppose I'll have to have faith.