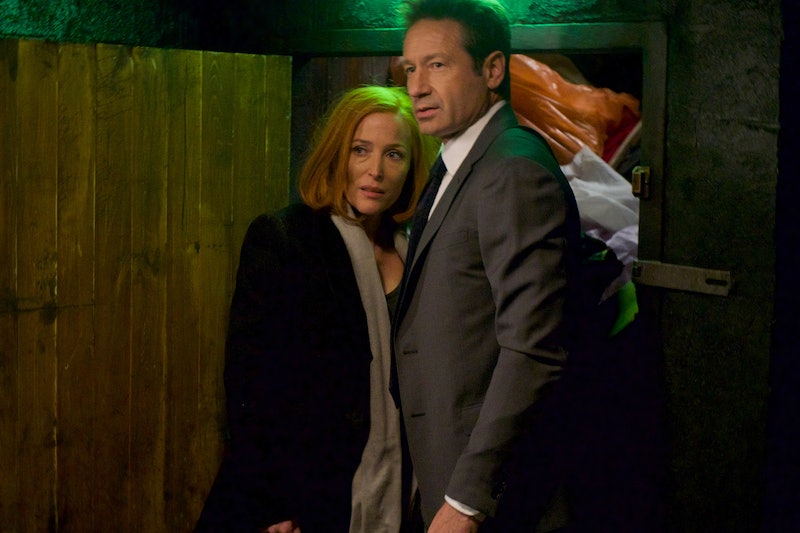 Sad news for fans anxiously awaiting The X-Files reboot. According to a Monday, August 10, report from E! News, Mulder and Scully are dunzo — at least as far as their sizzling romance is concerned. Longtime fans of the Sci-Fi hit remember waiting years for the FBI partners to so much as kiss. Honestly, part of their appeal was the fact that they waited so long to get together, as this so deftly built anticipation. Still, after several seasons of longing looks and the duo constantly abstaining from dipping their proverbial pens in the company ink, it started to get old. I think I actually yelled, "Just make out already!" to my screen at one point, because it was getting that ridiculous. Our wishes were granted when the two finally got together for reals as a full-blown couple at the end of X-Files: I Want To Believe. While you and I may literally "want to believe" that a split between these lovelorn agents is impossible, it appears that their romance has been fully extinguished in the upcoming reboot.

Before you start weeping openly and scouring YouTube for fan-made videos by Mulder and Scully shippers, take solace in the fact that this may actually be a good thing for the reboot. Although I was as elated as anyone to see the two give into their feelings for each other, television romances actually have a tendency to get stale after two people you want to get together actually...well...get together.

Remember that the fact that Mulder and Scully's romance has been filed away (get it? Filed? Nevermind...) doesn't mean that the two will never get back together. If anything, their breakup could add an exciting dynamic to the show — it's happened before. Several television couples' appeal has been marked by breaking up or an off-again, on-again relationship. Let's take a look at the evidence, shall we?

Although they were arguably the series' most prominent romance, remember when Ross and Rachel dated for almost a year? It got kind of boring. Their break up led to way more entertaining on-again, off-again fodder, and even a drunken Vegas wedding. Classic.

Dawson and Joey's break up paved the way for the ship-worthy pairing of Pacey and Joey. Sorry Dawson and Joey fans, but nothing can compete with the chemistry of Jacey, or whatever fans coined as their couple name.

OK, I know I just touted Pacey and Joey as my fave Dawson's Creek couple, but hear me out. It was completely necessary for these two to split in order for their reconciliation on the Series Finale to be that much more satisfying.

Angel and Buffy's relationship came to a halt after the two consummated their relationship in Season 2, turning Angel into EVIL Angel. I'm sorry, but Evil Angel was awesome for the brief time he lasted. All the tormented looks between the two post-break up only made the series more addictive.

Being that we learned in the Pilot that Robin was not The Mother, these two clearly needed to break up. For all of you shippers that enjoyed the Series Finale where the two get back together — congrats, but I preferred the alternate ending. I was always more of a Barney and Robin shipper. Speaking of which...

6. Barney & Robin On How I Met Your Mother

I'm talking about the first time Barney and Robin broke up, as opposed to their divorce — WHICH I HATED. Although I had been aching for the two to get together after Barney spent all of Season 4 pining after Robin, their break up was necessary for future story arcs and added to their dynamic during later seasons.

This one is kind of obvious. I mean, Pete cheated on Trudy a lot. It was completely necessary for her to give him the boot, and the acerbic "I will destroy you" line she delivered following their break up was everything ever. The split also led Pete to grow as a character, as he eventually realized Trudy deserved the best, and changed his ways during their reconciliation.

See, guys? Breaking up isn't always a bad thing — especially when it comes to television couples. Let's hope for many more scintillating break ups — and make ups — to play out on our respective screens.