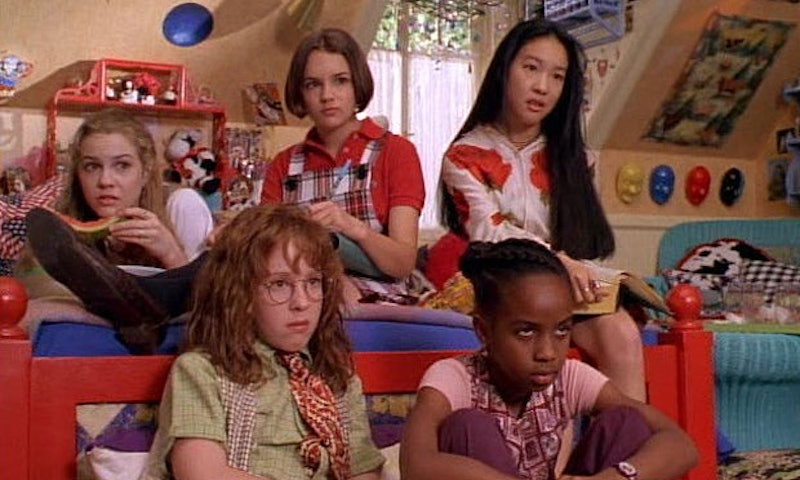 The names Kristy, Mary Anne, Claudia, and Stacey only mean something to you if you grew up in the late '80s/early '90s. In 1986, Ann M. Martin introduced us to these four friends and their baby sitting club and then almost ten years later 1995 The Baby-Sitters Club was turned into a feature film. It was 20 years ago today that The Baby-Sitters Club was released into theaters and even though it didn’t do that well money-wise, it became a classic to every '90s girl who ever read the book series — or had a baby-sitters club with her friends.

Today, it’s a pretty hard movie to find unless somehow you still have and operate your VHS player, so many of us haven’t seen it in years and completely forgot who actually starred in the film. To be honest, I was pretty surprised by some of the the people in the babysitting flick. There were some, like Tricia Joe and Stacy Linn Ramsower who played key characters Claudia and Mallory, but didn’t go on to star in anything after, but there were some stars who we still talk about today. Here are nine stars that you completely forgot were in The Baby-Sitters Club.

It doesn’t really surprise me that Rachel Leigh Cook took on the role of Mary Anne Spier in the film. It was her first movie in the '90s, but Rachel Leigh Cook went on to be the “it” girl in the movie world during that time. To be honest, I haven't really watched Cook since She’s All That, but she has been in random small films over the years.

Larisa Oleynik played Dawn Schafer, Mary Anne’s stepsister. You might not remember her name, but you definitely remember her as Alex Mack on Nickelodeon because if you saw The Baby-Sitters Club, you were definitely an Alex Mack fan. Besides Alex Mack, you’ve seen her in 10 Things I Hate About You, loving her new Prada backpack and in Pretty Little Liars as Ezra’s annoying ex-girlfriend.

Sissy Spacek’s daughter took on the role of president Kristy Thomas in The Baby-Sitters Club. While she’s appeared in movies since then like Orange County, Fisk is also responsible for writing and performing songs on movie and TV soundtracks including Nicholas Sparks’ Safe Haven and Dear John.

The boy-crazed Stacey McGill was played by Bre Blair. I never realized just how inappropriate it was that she had a crush on a 17-year-old when she was 13 years old. While the actress never made it big, she has guest starred in pretty much every major TV show. Her list of credits include Two and a Half Men, 90210, Franklin & Bash, Grey’s Anatomy, The O.C. and more.

I think everyone knows who Ellen Burstyn is because she’s one of the best older actresses out there. She played the neighbor Mrs. Haberman who was always pissed about the babysitting camp next door. Most recently you might remember her from the Flowers in The Attic series on Lifetime. She also has a slew of movies coming out in the next year because she’s always in demand.

Lucy Hatcher from The Practice makes an appearance as Cokie Mason in the film, which is perfect since Marla Sokoloff has nailed the mean girl role. You might also remember her as the girlfriend in Dude, Where’s My Car.

There’s no mistaking Becca Ramsey because Zelda Harris has a face that's hard to forget. She's also appeared in Law & Order before her Babysitting days.

To be honest, I had no idea this guy’s name, but I will never forget to include Luca on my list of people from this movie. While he’s been in a ton of things, I have never actually heard of any of them except Valkyrie and the 2011 version of The Three Musketeers.

More like this
Zach Gilford Admits He Forgot Taylor Swift's Name When He Starred In Her Music Video
By Jake Viswanath
Reese Witherspoon Confirms This Fan Favorite Will Return For 'Legally Blonde 3'
By Jake Viswanath
Taylor Lautner Copped To Finding Jacob "A Little Annoying" In Twilight
By Stephanie Topacio Long
James Cameron May Come To Regret His 'Titanic' Door Experiment
By Stephanie Topacio Long
Get Even More From Bustle — Sign Up For The Newsletter
From hair trends to relationship advice, our daily newsletter has everything you need to sound like a person who’s on TikTok, even if you aren’t.