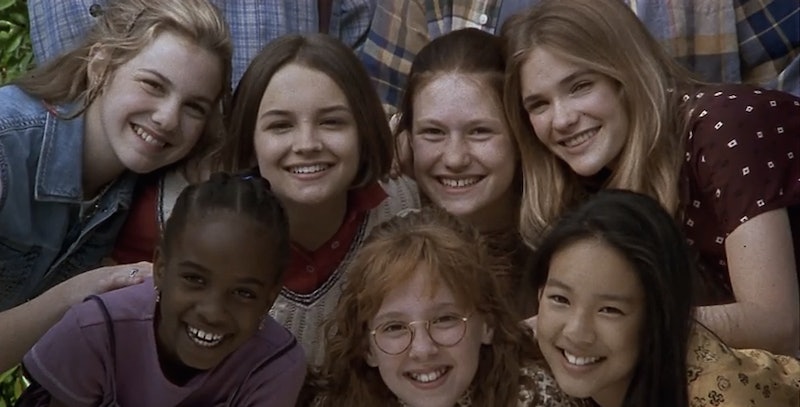 There was a time dark time, probably while in the hideous throws of puberty, when I fell in love with The Baby-Sitters Club series. I loaded my bookcase with whatever I could find from thrift stores and used book shops, at one point accumulating over 50 tales, including mysteries, super specials, even even one of those jump-the-shark SUPER mysteries. But the extension of my Baby-Sitters Club obsession really got sad with how often I watched the 1995 movie... and it's even MORE embarrassing now that I've given it a modern evaluation for this week's bad movie rewatch.

And other things happen, too.

Basically, here's a chronological documentation of the most ridiculous moments from the Baby-Sitters Club movie... which STILL isn't bad as the TV series, somehow.

1. This is TOTALLY not what the notebook would look like.

We've all seen Mary Anne's handwriting, this is what would happen if she got sick and left Claud in charge.

Kristy says as Claudia poses next to some modern art disaster.

Instantaneously, she becomes the saddest character in this movie.

Every outfit description of Jessi ever has her in a leotard. Is this a leotard? NO.

5. "We have a tragedy here! I flunked science and I have to go to summer school."

CLASSIC CLAUDIA, bringing home those F's. Also, this is like, the worst line delivery ever.

7. Baby Rachel Leigh Cook and Larisa Oleynik are already dreaming of the extensive career they'll have after this movie.

Cook will go on to She's All That, and Oleynik will be blessed with 10 Things I Hate About You.

Rosie Wilder's "little" cousin Luca and his stupid accent. More on that later.

9. Kristy whines and bitches about how her mom should give her phone.

This conversation would never take place today, because most kids receive their first cellular device in utero.

DING DING DING DING, AND THERE IT IS! Baby-Sitters Club fans will note that falling for an older guy is an atypical Stacey plot, but usually they end with someone being like, "You're too young for him, bro!" Sadly, that doesn't happen here.

12. When Kristy's great idea of a fun summer is to spend all her free time not baby-sitting...by running a camp for two dozen kids. Basically, baby-sitting.

And the BSCers respond with a collective expression of "Go f**k yourself."

14. Alan Gray shows up, looking like the most whimsical of your hipster friends.

His affections have been scattered on basically every BSC member in the books, but in this particular flick the spotlight's on Dawn.

True to the source material.

Maybe because he's unemployed and LIVING IN A VAN DOWN BY THE RIVER.

17. The BSC can buy this unused greenhouse-ish thing as long as they spend the last vestiges of their free time cleaning it up.

Wow-ee, it's turning into a bang-up vacation!

18. This is how I hang out with all my friends.

19. When the camp composes a rap about the central nervous system so Claudia can pass science.

21. Kristy delivers a whole spiel about how her father is putting her in a terrible position and he's never there for her and like, he sucks and stuff.

It's supposed to ignite our sympathies for her, but sadly Kristy has the kind of face I want to punch and I therefore feel nothing.

Wow, Claudia, let's just put it on the refrigerator where everyone can see it.

24. Luca takes Stacey and Claudia out to New York with a few friends, which makes none percent sense.

What is this movie.

NO THAT DOESN'T MAKE ANY OF THIS OK.

... not really a wish, Kristy. Maybe try for a less-terrible father?

29. "We've spent some of the best years of our lives in the place."

What? Dawn, you moved here, like, last year, let's not mess with canon and pretend you guys spent decades in Claudia's room.

Not when the children are barely out of second grade.