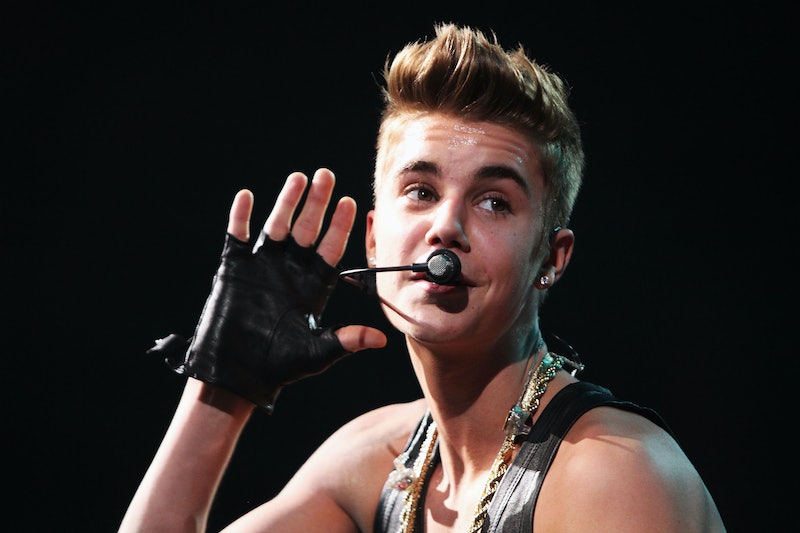 Most children say things like "mama," "dada" (which OK, is not a word but many parents believe it to be one), "hello," "hi," or "ball". Simple words that exude the pure innocence of childhood, their playful nature, their reliance on parents, and their want to communicate with the world. But most children aren't Justin Bieber. According to his mother Pattie Mallette, Justin Bieber's first word was "money". Yes, MONEY. DOLLA DOLLA BILLS. SKILLA. CABBAGE. THE GREEN STUFF.

Now before you analyze this too heavily and start to think that whole "children are born a blank slate" ideology of John Locke was bullshit, there's a reasonably innocent explanation for why the pint-sized Biebs was vocalizing the thing that he now has an excess of as a tot. In a twitter Q&A, Bieber's mom asked fans to come to her with questions about the 19-year-old singer, and when asked about his first utterances, she said: "Money! Hahahaha! Instead of Mommy he said Money & Daddy!"

She also answered other questions, like what she thinks of her singing son's twenty-thousand tattoos. (Just kidding, Biebs recently said during an interview with Ryan Seacrest that he's had 8-10 two hour sessions of tats). He even has one of her eye, which while it could be creepy (think of your mother watching you in a brothel or illegally spray-painting a wall in a foreign country), we think it's a sweet ode to mama Bieber. Here's what she had to say about his ink:

She also discussed his childhood bedtime routine, "I would tuck him in, read to him, pray with him & talk & giggle sometimes for an hour..." Her twitter profile reads, "Yes Justin Bieber is my son. I have many other great qualities besides being his mom haha! No really."

Mallette had Bieber at just 17-years-old, but says she's not ready to be a grandmother just yet:

We can't blame her. While we won't mediate on the merits of Bieber's fathering abilites in this article, we aren't quite ready live in a world where Justin Bieber is a father to more than the monkey that he tried to smuggle out of the country.

More like this
20 Celebrity Couples Who You Forgot Dated In 2002
By Jake Viswanath
Scott Disick’s First Time Around Kravis Was “Awkward,” To Say The Least
By Jake Viswanath
Justin Timberlake’s ‘Candy’ Character Really Investigated Betty Gore’s Killing
By Brad Witter
The WAGatha Christie WhatsApp Messages Have Been Released — & They're Wild
By Sam Ramsden
Get Even More From Bustle — Sign Up For The Newsletter