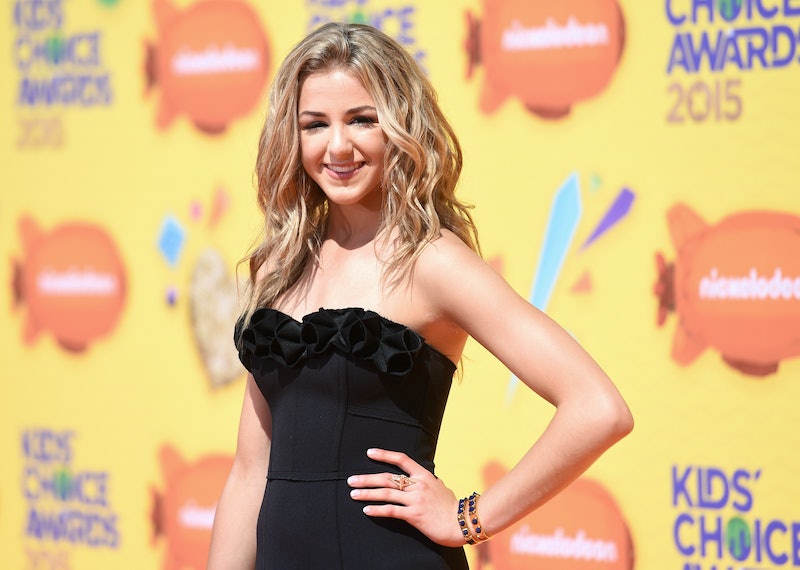 Tonight's a big night for avid fans of Dance Moms, because fans will finally settle the ultimate dance rivalry—who will take home the award, Chloe, or Maddie? Chloe Lukasiak at the 2015 Teen Choice Awards rocked a perfectly summer ready outfit, and regardless of who takes home the title, she's already won with us on the style front.

Apparently, it's the year of emerald, à la Sarah Jessica Parker's gorgeous Elie Saab gown. Now, Chloe Lukasiak is taking the color and claiming it as her own, posing in an emerald green skater skirt, pink crossover top with what looks like blue and green palm trees, and light nude pumps. I absolutely love this summery, yet elegant outfit that kept her looking fresh and young. Paired with a textured clutch and her loose signature blonde waves, she looked 100% Cali ready.

Though she left ALDC, Abby Lee Miller's dance company last year, she actually went on to join Pittsburgh's Studio 19 group, according to the International Business Times. So while we won't be seeing the four-year-plus rivalry ensue between these two, it seems as if it's for the best. Though both have admitted that they're each others biggest rivals, it's something they're both used to.

Aside from starring in the hugely popular show, the 14-year-old has had quite the busy past few years, from appearing in music videos for Jess Godwin and Bianca Ryan, to delving her toes into acting. Chloe told VivaGlam Magazine, "I would really like to get into acting so that's what I've been working on now." While different from the world she's used to, she'll definitely still be in the spotlight!