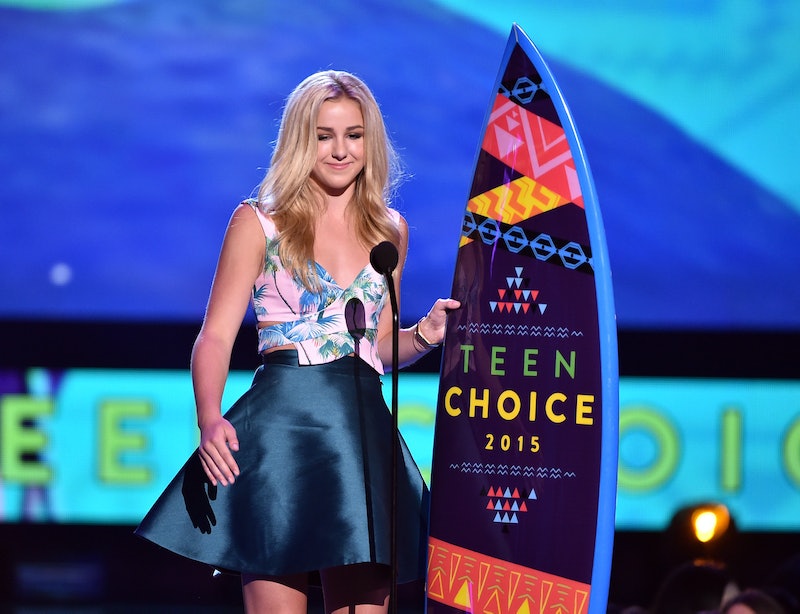 Chloe Lukasiak and Maddie Ziegler were nominated for the same surfboard in the Teen Choice Awards on Sunday night, but it's cool. At least one of the Dance Moms rival dancers took home a surfboard. Lukasiak won Choice Dancer at the teen awards show on Fox, beating her former teammate Ziegler. Lukasiak, who is 14 years old, seemed overjoyed to be honored by her fellow teens. "This is such an honor and, even though I don't know how to surf, I think I know someone who can teach me," she started off her acceptance speech.

She also went on to express gratitude to all of her dance teachers and her fans who voted for her in the category, which also included the nominees Alison Holker, Derek Hough, Les Twins, tWitch, and Ziegler. Lukasiak ended her speech on an inspirational note: "I also wanted to say one more thing: to anyone who has ever been told that they can't do it, that they shouldn't do it, or they aren't good enough, ignore it, do it anyways, and prove them wrong."

And that's certainly what Lukasiak has done. The successful dancer has left the Dance Moms Abby Lee Dance Company after Season 4 and told OK! Magazine that she's really enjoying her new studio. The publication also asked her about being up against Ziegler for the award, but Lukasiak said it's no different than when they competed together on the dance floor. "It’s not really different than anything else," she told the publication. "I’ve always competed against her my whole life. She was probably my biggest rival in the competition world."