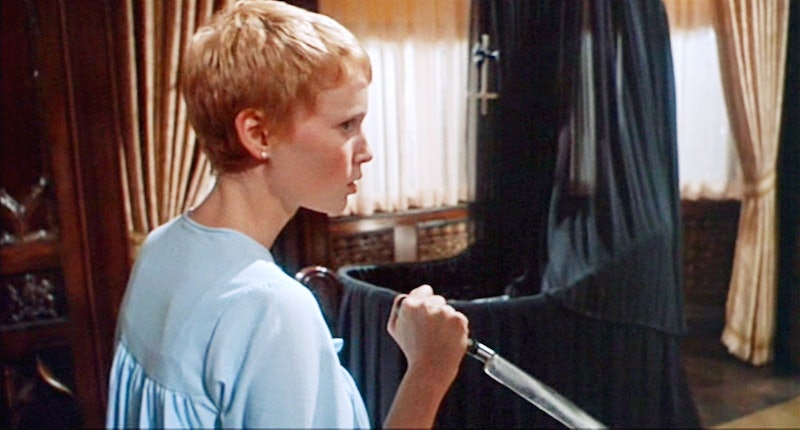 According to The Wrap, the new adaptation will center around a young married couple living in a spooky apartment in Paris (the book and movie take place in New York). The wife gets pregnant, things get weird, and she suspects everyone around her is up to no good. "Up to no good" = "prepping for the birth of the demon baby."

As we always ask when faced with a remake: Does a reboot of Rosemary's Baby NEED to happen? Eh, who cares. The timing is pretty solid (remember the repeated Rosemary's Baby references throughout last season of Mad Men?) and at the very least, it may inspire people to revisit the novel and movie.

Casting for the miniseries will begin ASAP. So! Who should play the titular character? I'm sure NBC has some Mia Farrow-inspired ideas (i.e., a petite, bright-eyed, bepixie'd blonde). Mia Farrow's hairstyle in the 1968 film adaptation of Rosemary's Baby is the stuff of legends. So yes, I do hope the NBC miniseries pays proper homage to the look.

My vote? I think it'd be fun if NBC cast someone who has yet to go pixie. Why not be a little adventurous? We already know that Halle Berry, Michelle Williams, Rihanna, Carey Mulligan, Jennifer Lawrence, Anne Hathaway, Natalie Portman, Miley Cyrus, Charlize Theron, Beyoncé, and other ladies can rock the style. So let's subvert expectations. I mean, every time a star chops off her locks, people talk about it, so the move would be easy breezy press for the miniseries. And if the Rosemary's Baby reboot wants to drum up even more attention, NBC should Farrow-ise a curveball they brought in from left field. Or however that saying goes. What I'm trying to say: Pick someone surprising.

I am all about a pixie cut. Short hair or long hair, I don't care. Just do what 'do helps you do you. That being said, there are some celebs I don't think would ever go pixie simply because they've got their signature look down pat/why reinvent the perfect wheel. Don't get me wrong, the following actresses could totally pull off a pixie. I mean, they're incredibly beautiful women. They could shave their heads and paint their scalps lime green and I'd be like, "FLAWLESS."

Would any of these women make a good Rosemary Woodhouse, character-wise? I don't know. I didn't get that far in my mind. I stopped at "whoa, what if so-and-so cut off all of her hair? THE INTERNET WOULD FREAK THE HELL OUT!" Again, I support any hairstyle that makes a gal feel great, but I also support anything that causes the Internet to simultaneously implode and explode.

Could you imagine the hoopla that'd go down if Kunis chopped off her thick brown hair and bleached it? IMHO, her eyebrows would look AWESOME against a blonde pixie cut.

She's almost there with her new bob, but a Rachel-esque pixie 'do would be revolutionary. It'd be short AND full of volume! She wouldn't go with solid blonde. Nah. Rachel Green highlights all over that inch-long hair.

Teen boys who subscribe to a conventional idea of beauty would riot in the streets.

Oh, she's not an actress. Oops. She loves a wig, but if she went all in on a real pixie cut, the Internet might break for forever.