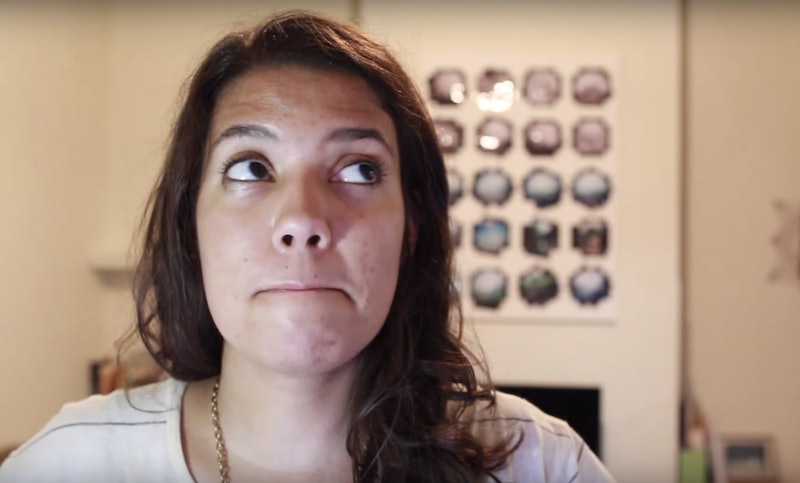 There is a name on your birth certificate that you are semi-legally bound to for your whole life, but weirdly, you don't get a say in it. YouTuber Taylor Peters explores the concept of choosing a name for yourself in a recent video, and it is kind of a mind-boggling idea to wrestle with. Like, would you be a fundamentally different person if your parents had chosen a different name for you from the get-go? And more relevant, would you be seen as a different person if you changed your own name yourself later in life?

Taylor's inspiration for the video came by way of a viral Tumblr post created by Lynda Barry, a cartoonist and professor who has one unique rule for her class — all of the students have to pick a different name. They will then go by that name and exclusively that name within the boundaries of the class throughout the entire semester:

In my class, we all go by different names, names of characters we chose for ourselves and we use them for the entire semester. You are free to tell each other your real names, of course, but in class we will use the name you’ve chosen. You can pick a character that exists in the image world – like Medusa or Chef Boyardee or Shrek. Or yu can pick a ‘character’ that exists in the real world —like Sophocles or Beyonce or Ruth Bader Ginsberg or you can choose a character that is an ‘entity’ of some sort, like NASA or Super One Foods, or Iceland or The Ramones. You can choose a character of any gender, from any point in time, any genre. Think of a name you’d like to hear said out loud over the semester. For example, I love wookies, so one semester I was Professor Chewbacca and I was so happy when anyone said my name. In our class, I’ll be Professor SETI (Search for ExtraTerrestrial Intelligence).

The concept is already sick enough on its own — like, who wouldn't want to get to experiment with their name once in awhile? If you do it in the real world it usually instigates a big commitment to change it, but in class it's fairly harmless and fun. (Confession: I once spent an entire few months working as a phone representative and introducing myself as "Summer," which for some reason made me hate that job 17 percent less.)

But what Taylor explores in her video is just how far reaching the influence of your given name have over time — particularly in this day and age, when you might encounter somebody's username before you ever learn their real name. Hers, for example, is "itsradishtime," which summons up entirely different ideas than the name "Taylor" would. It's an especially relevant discussion to have when you also consider the prevalence of online dating in 2015. As a person who just recently dipped a toe in those waters (help me), I can attest to the existential mess that was me trying to figure out a username.

There's no doubt that names have influences over us — your name can affect your ability to get a job, and may even have an impact on your personality. It is interesting to examine those implications, especially in people who choose to change their own first names. While it may seem like your name is so innate to you that you could never separate from it, for other people it is a reflection of something that they never felt they grew into. Beyond that are people who choose to legally change their names in the process of transitioning — while people associate a lot of the change of transitioning with outward, physical differences, names are also incredibly defining to your sense of self, and making that shift is a huge step in how you present yourself to the world.

In any case, if you feel like getting your #NameNerd on today, check out The Brave Little Toaster's insightful video below: