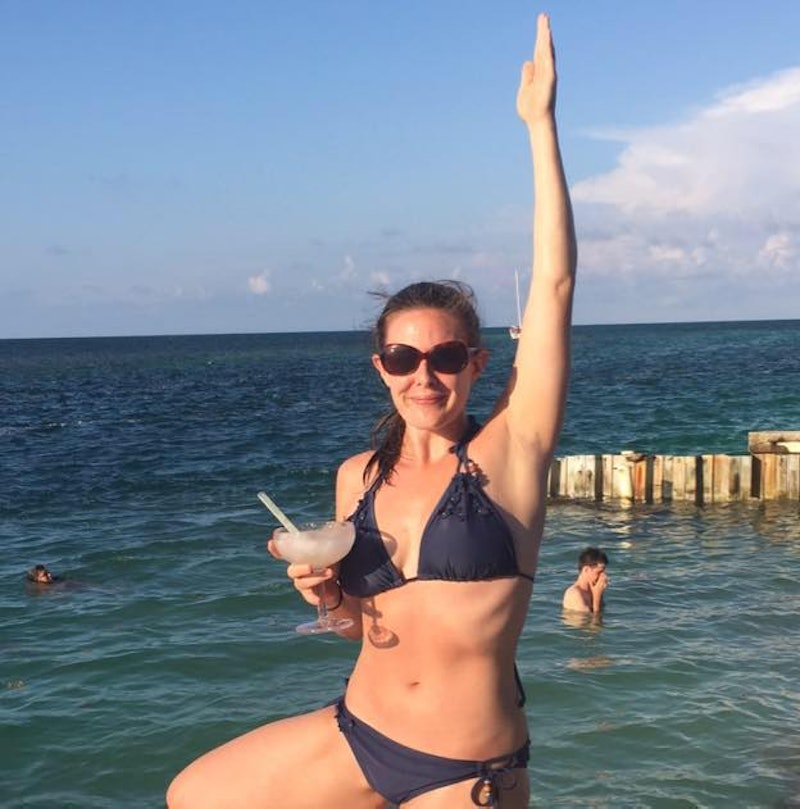 On a trip back home, I recently connected with my high school boyfriend. He was that guy that so many have — the sweet, loyal and fun first relationship that’s the equivalent of a training bra: comfortable and exciting, but not something that can last forever. I broke up with him (quite dramatically) within my first few days of college because I wanted to experience all that the single life could offer me. I had been tied down most of high school, so why not explore?

It was a rough breakup, and we stayed out of contact for the better part of the last nine years, but with one Facebook message, we agreed to meet for our first legal drink together. I don’t have a car anymore — thanks, NYC transit! — so just like all those years ago, he stopped by my house to pick me up. As he walked up the stairs, my heart started racing with all of those butterflies that I felt when we first kissed, when we first had sex, when he told me he loved me.

Though we had both grown up and changed — he was stronger and more confident — we picked up right where we left off. Being around him for a few hours was easy and carefree, and we laughed how everything turned out. He had wanted to be a chiropractor back then, and now he had just passed his exam to start residency. I wanted to be a writer in New York, and, well, you’re reading this article right now.

All those nights we spent lying outside under the smothering cascade of North Carolina stars, talking about the future like it was something distant and far away, intangible, and unrealistic, I never imagined we’d be sitting at a bar as adults, sipping on $4 Bud Lights, like nothing had changed at all.

We ended up getting more than a little drunk (as you do) and getting into those heavy-hearted topics. I apologized for being an 18-year-old bitch who broke his heart, he promised me all was forgiven. We traded compliments and we dished on our (mostly terrible) relationships since then. We discussed love and how difficult it is and dating in our respective cities — Atlanta and Manhattan — and we both wondered when we all started making everything so damn complicated.

And though I didn’t think much of it through my boozy haze, I let the words that I hardly ever speak out loud leave my lips: “I’m afraid it won’t work out one day. I really am. What if I end up alone?” I won’t admit that tears filled my eyes, but I won’t deny it either. Luckily, as someone who has known me since I was 15, it didn’t phase him.

In return, he smiled that toothy grin that reminds me of making out in the back of a car and said: “Linds, you haven’t stopped worrying about that yet? You’ve been stressed out about getting married and finding love and having babies since we dated.”

“I have not!” I rebutted, annoyed and slightly curious about this remark. Had I really been talking about this the majority of my life? Surely not.

“You have! You used to talk about our wedding and make me promise you that I love you allll the time. You've always been worried that you wouldn't be lovable enough to marry. But you couldn’t control it then, and you can’t control it now. You have to learn how to laugh and smile about this again. You have to learn to not give a flying f*ck about it and have some faith that it’ll work out.”

“What if I don’t have faith?” I asked, oddly intrigued and highly buzzed.

“Then stop giving so many f*cks about it, and just let it happen. You’re beautiful when you really smile and you really let yourself be. I promise you a man will fall in love with that. I did,” he reassured and kissed me on the forehead with a big hug, just like he did when we were kids. He smelled the same, and though neither of us would want to end up together, it was nice to remember how we both started: Vulnerable.

I’ve been dating for so long and going through the same motions, the same conversations, the same disappointments, the same drinks that wasted my time and calorie intake, the same everything, that I forgot what it was like to have fun. And frankly, to go after what I wanted. At 15, I would have never put up with a guy who didn’t call me back or a dude who forgot something important in my life. I wouldn’t have settled for some mediocre date because I had endless hope and trust that I’d one day meet a pretty stellar guy, so why would I put up with a jerk?

How is it that, at nearly 27 years old, I have less confidence than I did as a sprightly teenager? Why have I wasted so much time worrying when, how, and where I was going to meet my partner instead of enjoying the ride? Why did I care if it didn’t work out with some dude from some dating app or some bar on some random Tuesday night?

That high school stud of mine was right. Why did I give so many flying f*cks?

How I Stopped Caring

It’s been a few months since that sweet exchange, and it’s been pretty eye-opening for my dating life. Instead of worrying if I was "running out of time" or if I was "going to be alone forever," I’ve stopped caring. And not in some grand scheme or dramatic gesture, but in the simple, easy ways. I deleted my dating apps. I let men strike up conversation with me. I take it as a compliment when someone I’m not interested in hits on me at the dog park, instead of rolling my eyes as I walk away, wondering why it couldn’t have been someone cute. I’ve stopped trying to schedule dates into my weekly routine, instead taking them as they’ve come.

Have I been on fewer dates? Yep. But have they been of better quality? Absolutely.

And maybe more importantly, I don’t care as much. The stakes don’t feel as high. By letting go of the anxiety that’s been in my gut for the past decade, I’ve opened myself up to something healthier: peace. I feel free to explore, free of my own self-imposed deadlines on love, free to live life, spend money, take trips, go out or binge-watch … however and whenever I want. If that means meeting someone along the way, then great. If not, then I’ll just have to trust — like I did when I was pimply faced and pudgy at 15 — that it’ll work itself out.

Now, just because I don’t care as much, doesn’t mean my intentions have changed. I still really (truly, madly, deeply) want to share my life with someone, and while I can’t make it happen, I also can’t worry about it. If it’s going to happen, it will. I can’t speed it up or slow it down or develop an ulcer in the process. And maybe more importantly, I have to (and want to) be happy in the meantime. I’ve never let a dude control my happiness level, so why am I allowing my imaginary future husband take the reigns on my dimples?

I’m not. Because ya know what? I don’t give a f*ck anymore. And it’s the best decision I’ve made about my dating life in a very, very long time.