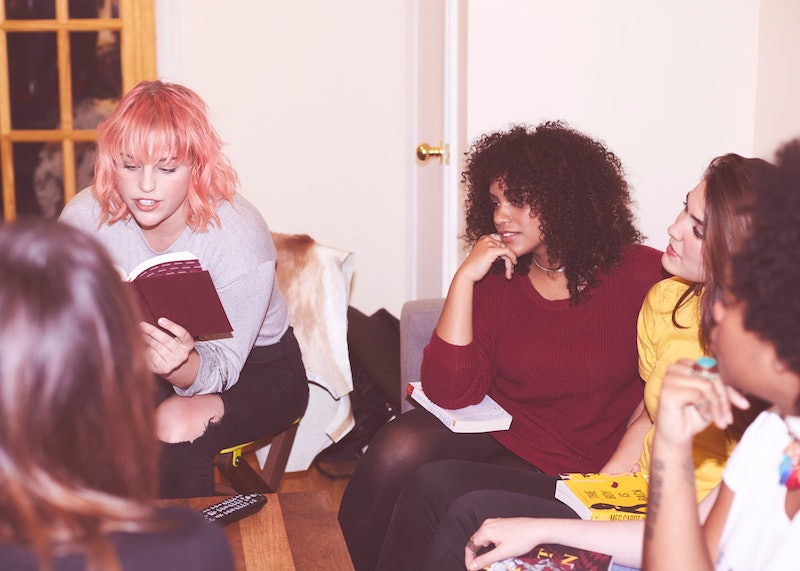 There's a danger in reading a book by yourself for pleasure: You might accidentally come across a book that is so moving, powerful, infuriating, thought-provoking, something that you want to talk about it with everyone. And when this happens, you — or, at least, I — try to turn every casual coffee, and happy hour drink, and phone call home into a discussion about this book. And, when it turns out that whoever is on the receiving end of this rant hasn't read the book, I try to convince them to please do so. (This is probably not the most enjoyable topic conversation, but it isn’t for me, either, because that would be the discussion about the book, natch.)

The books that I can't stop talking about? Those are the books for me. They're not necessarily my favorites of all time, but these titles are the ones that are bound to invoke a reaction so impassioned, emotional, and human that you'll want to share what's between you and the page with everyone else. You can’t do that, of course — unless you keep every dinner date hostage, that is (not that I'm saying you should do that or anything). But if you're curious about the kind of book that'll make you have that impulse, I have a whole list of 'em below.

Waiting is the story of a man in China who has a wife back in his village and a mistress at his place of employment (far away from said village). He prolongs this universally unsatisfactory arrangement for almost two decades. He is arguably one of the most selfishly weak (or weakly selfish) characters in modern literature. He is the topic of a rant I delivered in a bar at my best friend’s birthday party last year. He is terrible. The book, however, is great.

The Buried Giant by Kazuo Ishiguro

This book is about an elderly couple in a fantasy-ridden version that’s medieval England, which is covered in a mist forcing everyone to slowly lose their memories. It's also about what and how we remember and love those who mean something to us when they mean something to us, and how that fades. It will make you cry, and sigh, and try to talk to the people you love whom you understand are just passing through your life about how sad it makes you that they can’t always be as important to you as they are now (good luck with that last part).

My Struggle by Karl Ove Knausgaard

This is a six-part epic about the author’s own life that will drive you to talk about the following: first, what a literary triumph this man’s writing is; next, that only a white man could publish thousands of pages about himself and receive critical acclaim; and third, that you think that you might be in love with Karl Ove Knausgaard, because he is clearly so intelligent and self-aware, but also that you are glad that you do not know him in real life, because that self-awareness can be, and probably is, so closely linked to self-absorption (this is to say that you will want to speak of him as you would a crush, except that a crush is a person you know, whereas Knasugaard is a Norwegian literary star living in Stockholm with his wife and children).

A Constellation of Vital Phenomena by Anthony Marra

I wanted to talk to one friend about this book so badly that I finally broke down and bought it for him myself. I did this because it is so powerful — it’s set in war-torn Chechnya — and well-written and moving that I sat around crying after I finished it, and because all I really want is to make my friends cry over books, too.

The Neapolitan Novels by Elena Ferrante

Elena Ferrante is the pen name of whatever beautiful genius penned this novel in four volumes (the last of which will be published in English next month), which tell the tale of two friends, Elena and Lila, growing up — and apart, and together — in Naples. I have never read such a depiction of female friendship or womanhood, nor have I ever read so wanted to start a book club exclusively for women and dedicated to one author. (I am not the only one in whom these books inspired a strong reaction: Slate’s L.V. Anderson created a Tumblr about what I will here call her... strong feelings about the male protagonist).

Dept. of Speculation by Jenny Offill

I read this short, beautiful book, which is basically about a woman living with her husband and kid in Brooklyn, because a friend of mine would not stop blogging about it. As that friend said in our conversation about it (which we had because, as its inclusion on this list implies, the book makes you want to talk), “I think any woman who has ever felt too ‘difficult’ or too ‘emotional’ or too ‘analytical; or too ... ANYTHING will find the book powerful and heart-wrenching.” I hope that the members of my mother’s book club, whom I have gotten to select this as their next monthly read, will think so, too.

Another friend — one whom I made read Dept. of Speculation — got me to read The Love Affairs of Nathaniel P. (she physically gave me a copy of the book) so that we could discuss it. If you are of a certain age (in your 20s or early thirties) and in a certain place (the greater New York area), you have probably met someone similar to the titular Nathaniel P. a wannabe intellectual who thinks that never telling women that he is going to treat them with honesty and decency means that he is excused from doing so. Read it, make your friends read it, and try, as a collective and as individuals, to do your best to steer clear of real-life Nates.

Americanah is about a Nigerian woman in America writing a popular blog about her observations of race in America. It’s also the book that I cited most often in the year after I read it. I have talked about it so much that, at this point, all I have to say about it is that it changed the way that I speak (and, honestly, think) about race in my own country and across the world, and also that it is a powerful piece of fiction.

I don’t know that I can think of a more vital book in the United States right now than Citizen. Rankine is a poet, and she is a poet with a point: that the mistreatment of black bodies in this country is real and everywhere. It is a small book that is big in emotion and impact on both its readers and, I hope, their conversations. I got it for a friend of mine headed on a journey home. He thanked me for bringing him to this beautiful and important book (you’re very welcome, Brandon).

Levels of Life by Julian Barnes

I read this on a transatlantic flight. It’s an amazing short read that somehow weaves together the lore of the love story of historical figures from the 19th century with Barnes’s own grief over the death of his wife. It’s a meditation on life, death, love, loss, and also, I think, about finding your own people in this world, which is as isolating today as it was two hundred years ago. I gave my book to my mother after I landed. I don’t think she’s read it yet. But I’ll be ready to discuss it with her when she does.

And, while we're at it, I might as well mention “A Temporary Matter” by Jhumpa Lahiri, “Some Women” by Alice Munro, and “The Lady with the Dog” by Anton Chekhov. These three pieces — or, more particularly, their painfully insightful closing lines — are far and away the works of writing that I try to talk about the most. And they aren’t even full books — they’re short stories. You can read them online. Please just do that so that we can talk about them together.