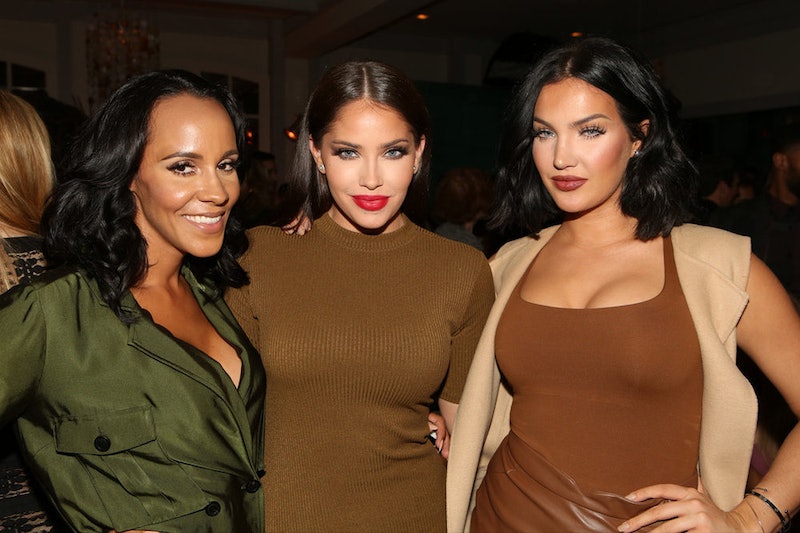 E!'s new series WAGS shows the women behind professional athletes, from their devoted wives and moms, to their partners who also have high-powered careers, to the casual girlfriends they're spotted with at a big game. And the premiere was all about establishing the WAGS hierarchy between the wives and Olivia and Natalie, the "girlfriends" who haven't been in long term relationships. Olivia Pierson and Natalie Halcro are cousins, and the two youngest members of the cast, and it seems like they're only there in order to mess with that hierarchy. They love making the other women's heads spin by defying the accepted rules — and it looks like this is going to be a long season if they don't start getting along.

I mean, within the first 20 minutes of the premiere, when the the whole cast sat together at a dinner for the very first time, both Olivia and Natalie attacked Barbie, the fiancée of a hockey player, without giving much of a reason why. They just sensed a chance to throw in some passive-aggressive barbs her way. According to Olivia, all hockey players are cheaters, supposedly, implying that Barbie's fiancé is stepping out on her. Olivia's sole piece of evidence was a claim that she once dated a hockey player who was unfaithful, which... OK.

But then Natalie chimed in, claiming that Barbie's seven carat engagement ring was small. I have to say, I was mostly relieved that Barbie's reaction was to be offended rather than to go to her fiance and tell him that he should buy her a bigger ring, which I can easily imagine happening on a show like this, which is all about enjoying the conspicuous consumption and finery on display. Though there is plenty of that.

A lot of the women on the show are either married or in very long-term relationships, and while they were up for Barbie's trip to Vegas, they got hung up on the fact that it doesn't seem like the younger women are respectful or deferential to them. Natalie and Olivia are cousins, and seem to be sharing a lot of scenes so far in the show, a tag team not unlike the Iaconetti sisters on Bachelor in Paradise Season 2 (well, for the first two episodes). Personally, I wasn't really sure what to make of them in the premiere. They could be fairly self-aware and playing up the WAG stereotype to amuse one another — they definitely seem to make each other laugh.

However, that humor is deadly to people like Autumn, who seems to take her position as the most "official" wife very seriously. For some reason, the WAGS are highly protective over their created hierarchy, and it seems like if Olivia and Natalie keep defying it, the rest of the women won't stand for it. Whether the cousins are truly defiant or just trying to amuse themselves while hanging out with the group, they're heading for a big fight this season on WAGS.

More like this
Chrishell Stause & G Flip Have “No Rules Or Regulations” In Their Relationship
By Brad Witter
What’s New On Netflix: Lana Condor’s Ghostly Comedy & A Sexy Reality Series
By Arya Roshanian
Here’s Everything Coming To & Leaving Netflix In July
By Grace Wehniainen
Paramount+ Wants To Take Over Your Netflix
By Sophie McEvoy
Get Even More From Bustle — Sign Up For The Newsletter