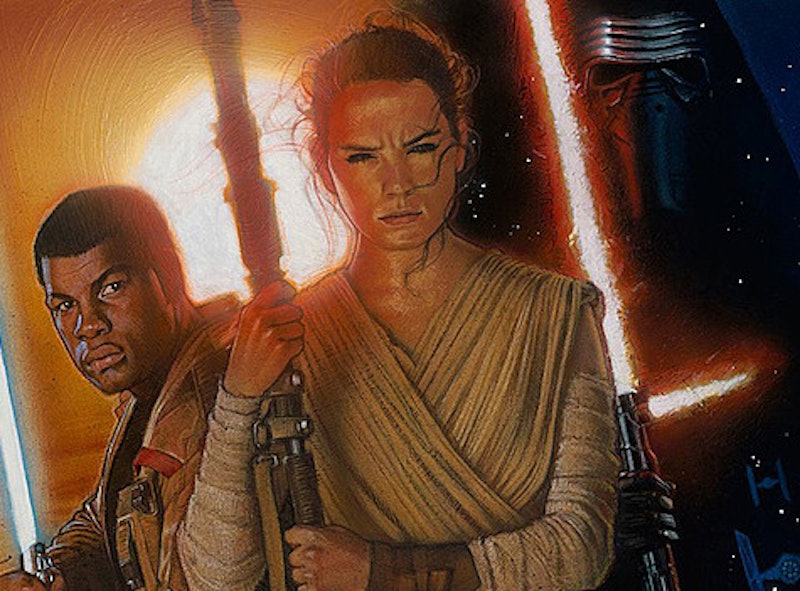 Many Star Wars fans knew that director J.J. Abrams was't going to unveil a new trailer or show new footage for Star Wars: The Force Awakens at this year's D23 Expo, but I'd be lying if I said I wasn't disappointed to not get some Jedi action. Nonetheless, I knew that Abrams wouldn't come to D23 empty-handed. Instead of giving us a new clip, he gave us something just as special: a brand new Star Wars: The Force Awakens poster by Drew Struzan.

If you've seen any classic movie posters like Blade Runner, The Goonies, Back to the Future, any Indiana Jones movie or any movie from the Star Wars franchise, then you're probably familiar with Struzan's work. He's a legendary artist with a distinct style that made movie poster art a valuable commodity not only among movie nerds, but for the film industry. His air-brushed pieces are veritable collages of the movie's characters and piece together the story in an epic, stunning style. He has set the standard for the movie poster.

At the 2015 D23 Expo this summer, Abrams brought out John Boyega, Daisy Ridley, Oscar Isaac, and Lupita Nyong'o, the stars of Star Wars: The Force Awakens, to show the audience the first poster of the movie. At first, they only revealed the top half of the poster, which had Boyega as Finn, Ridley as Rey as well as Adam Driver's Kylo Ren. Then it panned down to reveal Han Solo... and that's when Harrison Ford came out on-stage.

The crowd, as expected, erupted with applause, hoots, hollers, and ear piecing fan boy/girl screams — would you expect anything less? He's Han Solo. Yet even if he hadn't appeared, the poster reveal itself would've been enough. Abrams and his team have kept a tight lid on all the details of the movie, so it was a big treat to have the new official poster (which everyone in the audience of Hall D23 received) unveil some major details and hints about Star Wars: The Force Awakens. Here is what I gathered from the new one-sheet.

Finn Is A Jedi!

There's been a shroud of mystery surrounding John Boyega's character, Finn. Is he a good guy? Is he a bad guy? In the trailers, he's seen in a Stormtrooper outfit, but the new poster reveals him wielding a blue lightsaber, which provides a big detail of the movie. He's a Jedi (or Jedi-in-training)! To add to the excitement, the lightsaber looks like the one Luke Skywalker fought with in A New Hope. Could Luke be Finn's Obi-Wan?

It's The Light Side Vs. The Dark Side

The poster gives two sides of the Force. Finn stands on the light side with X-wing fighters flying in the background, while Kylo Ren stands with his tri-saber and Tie Fighters flying in the background. This isn't a major giveaway of the movie considering the entire franchise has based itself on the premise of good vs. evil, but it does give a closer look at the Darth Vader-esque Kylo Ren.

Like Finn, Daisy Ridley's character, Rey, is a mystery. It's not known where she stands in terms of the light and dark side of the Force. It's assumed her allegiance lies with the Jedi, but on the poster, she is positioned in the middle between Finn and Kylo Renn. She may be a wild card in The Force Awakens.

The fact that Han Solo is the only human character from the original trilogy that has shown face in the trailers and now the poster is a big hint that Harrison Ford's beloved hero has a big part in The Force Awakens. Part of me thinks he has a connection to Rey — maybe he's her estranged father. Still, who knows — my guess is as good as yours.

Star Wars: The Force Awakens doesn't come out until Dec. 18, 2015, so it's not until then that all of our questions will be answered. I can't wait.