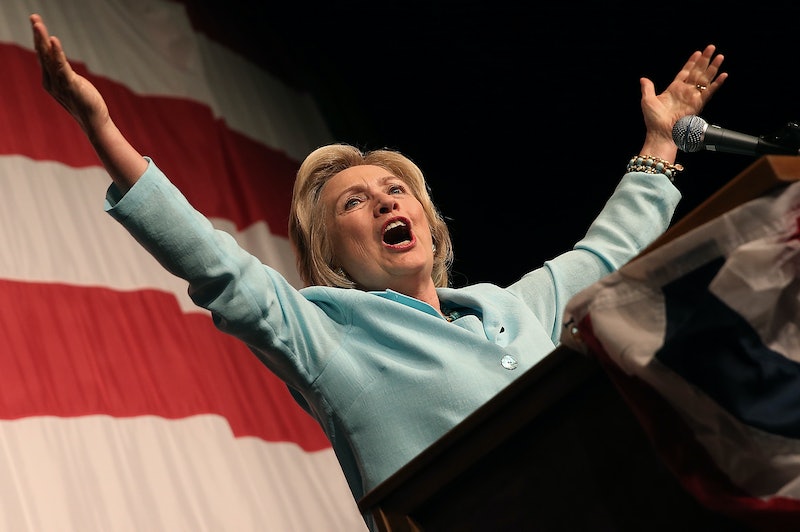 Considering she chose to house her base of operations in Brooklyn, New York, it should come as no surprise that Hillary Clinton's campaign headquarters look like a fun place to work. When I think of campaign headquarters, I think of the dusty rented offices I volunteered in through high school, or the high-stress, bustling offices you see on The West Wing. But the Hillary for America headquarters looks like it belongs to Google instead of a presidential candidate.

The campaign has leased the headquarters since April, but reporters were only allowed to visit as of this summer. And according to Politico, the offices exude a laid-back, fun vibe. There's a ping-pong and air hockey table, and young staffers are seen in every corner working from MacBooks while lounging on bean bags.

The only thing lacking in the Hillary for America headquarters is the candidate herself, who, according to Vanity Fair, doesn't work there often. While her campaign operates out of the 11th floor of 1 Pierrepont Plaza (which is close to the intersection of Tillary and Clinton ... yes, Tillary Clinton), Clinton herself prefers to work from her private office in Manhattan. Which is kind of sad. But to make up for the lack of Clinton's presence, there are a ton of other cool surprises that can be found inside HRC HQ.

Just in case the staffers forgot who they were working for.

Because why would you have a basketball hoop if you didn't have a retired NBA star to go with it?

Next to the giant H campaign logo are dozens of post-its. According to Elle, each post-it represents something that Clinton stands for, like a woman in the oval office.

How many of the other candidates are getting former presidents visiting their campaign headquarters?

Words Of Wisdom From Her Competitors

What better way to decorate your office than with giant posters of your rivals saying nice things about you?

If you had a poster of yourself that looked that cool, you'd put it up, too.

Running a campaign is expensive. It helps to cut corners where you can. Like using a hand-me-down fridge. It's not old; it's vintage.

There are definitely worse things to look at every day.

Even though working for and running a campaign is a highly stressful job, Clinton's campaign headquarters make it look like fun and games. Since Clinton and her staff have worked to showcase the youthfulness and vibrancy of her campaign, it makes sense that her headquarters would reflect it. Even if Clinton herself isn't always around, just being able to work in those offices would more than make up for it.