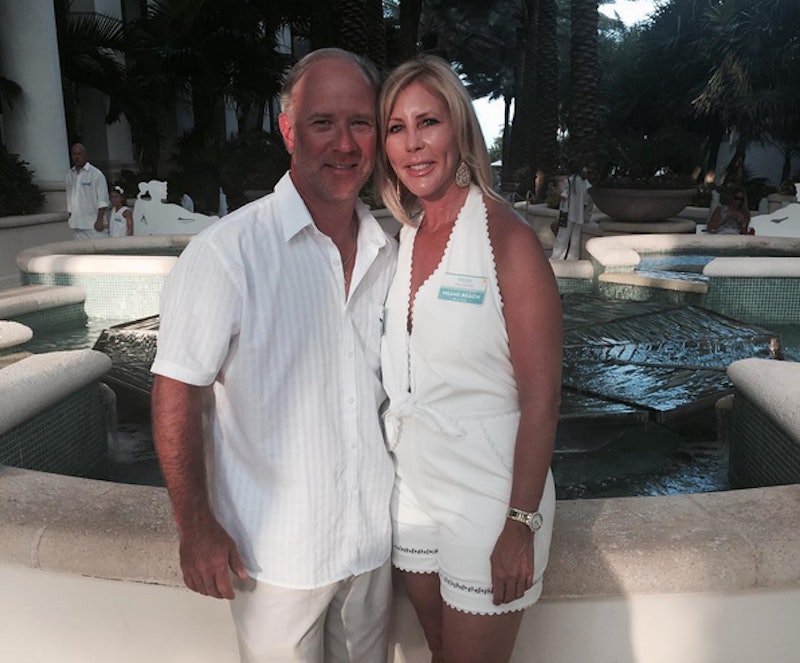 Whether you believe in modern medical miracles, or spiritual healers, or psychics, you would probably believe someone has cancer when they tell you they have cancer, right? Well, thanks to a very attractive — yeah, I said it — psychic on Real Housewives of Orange County, some of the women have been questioning whether or not Brooks has cancer. I know, why would you ever fake having cancer (especially since this is allegedly Brooks' third round fighting cancer)? That's a great question, but the only question the women are wondering is: Does Vicki's boyfriend Brooks have cancer?

It all started when Tamra invited her psychic, Scott, to a champagne date, as one does with her psychic. Tamra has been seeing Scott for about a year, and she promises he is scarily accurate. (According to her, he knew Tamra's son was having a girl, despite the doctors saying it was a boy.) Scott started speaking about Vicki, beginning with Vicki's great heart. Scott then says he has a "wishy washy perspective" on Brooks' cancer. Tamra asks "So he doesn't have cancer?" and Scott says "It's very possible."

Scott — who is admits he's not Ghandi — says he could be wrong, but he just "doesn't see it." So basically, Scott The Psychic doesn't want to go on record saying Brooks is lying about having cancer, but he's also not against stirring the pot a little bit (lest we forget that this is for TV). This is what a psychic does, right? The women were all in shock by this comment brought to you by Scott, but also questioned the authority, since once again, who would lie about cancer?

But of course there was more to fuel this fire. Brooks misspoke after the booty class that Tamra threw for the women and said that the doctor he was working with had the same cancer "he did." Brooks was quick to correct the word "did" and changed it to "do," but leave it to Tamra to key in on the word "did." Meghan also started questioning this new doctor that Brooks was talking about working with. She even went as far to question all of Brooks' cancer comments. Overall, there are a lot of questioning housewives on RHOC, and you can bet your booty class that this is going to be a conversation on the reunion.