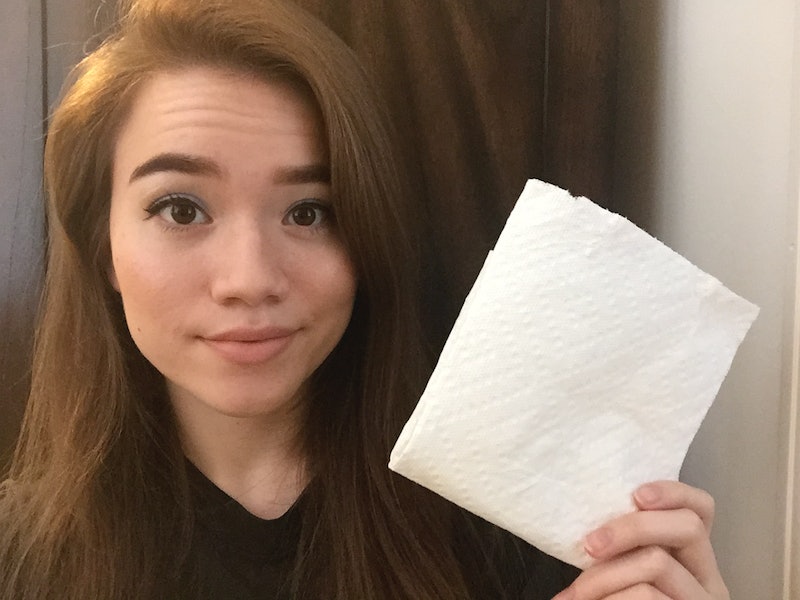 The key to a good selfie is having all of the components stacked in your favor: the expression, the angle, and of course, the lighting. But did you know that if your lighting is iffy, using a paper towel could help perfect your selfie? That's right, this tip from Virginia Nam over at Lucky Shops is a total game-changer. And it's easy to do. If you want to neutralize the lighting on your pic, all you have to do is hold up a white paper towel in the frame. There should be enough of it that the camera can pick it up, but it should be placed where you can easily crop it out.

But how does it work? Because the cameras in smartphones try to use a neutral tone as a reference point, many times it's our skin that calibrates the photo. But by providing something white for a calibration reference, like a paper towel (or tissue or piece of paper), other colors in the frame can adjust to be truer to how they appear in real life. And in so doing, selfies can neutralize instead of leaning too warm or too cool in tone. (If you're a photographer, yes, I'm talking about having the proper white balance.) Well I just had to give this hack a try, so I took my phone and a paper towel to three different lighting situations to see how my selfies changed. Here's how it went:

The mixed indoor lighting (some overhead fluorescent and some natural light through the window) had the strongest reaction to the paper towel. Before the addition of this calibration point, my selfie had a blue-tinge, making everything appear cooler than it actually is. But when I used the paper towel, the red tones in my hair reappeared, making my locks closer to their actual color. The paper towel also helped add some color back into my skin. And as someone who enjoys being tanner than she naturally is, I was pretty thankful for that.

Bathroom lighting is inherently yellow, at least at my place. Although this change was not as significant as with the mixed lighting, the paper towel did still help to alleviate the severe warm-tones. In the "after" photo, my off-white door actually appears off-white instead of the more bisque-color in the "before" picture.

Natural lighting (outside in the shade) worked similarly to bathroom lighting in that there was still an effect, but a much slighter one than with mixed lighting. It seems that natural light has a slight tendency to bleach colors, so the paper towel helped add a bit of warmth back, which I think comes across most clearly in my hair and skin.

While I probably won't start toting around paper towels for every selfortunity (that's selfie opportunity), it's good to know that when the mood (or mixed lighting) strikes, the tissues I keep in my purse, or even the toilet paper in any bathroom can help correct a selfie.