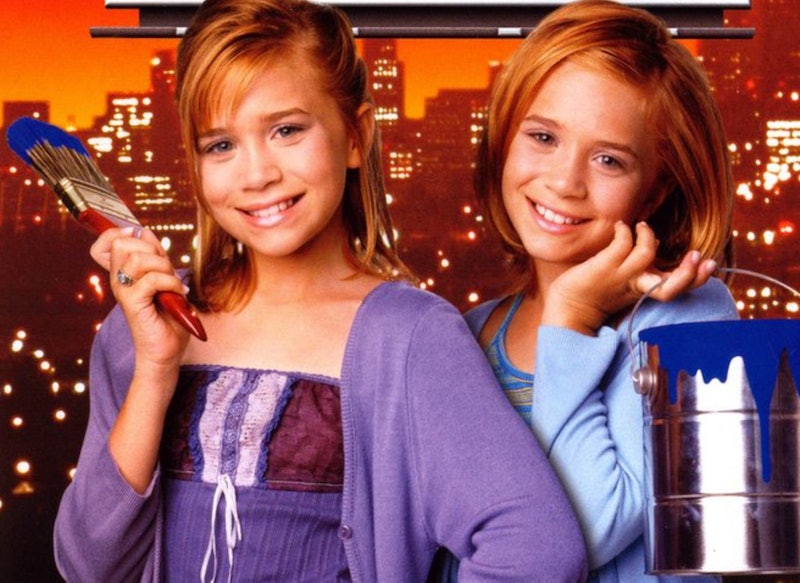 Seventeen years ago Mary-Kate and Ashley Olsen made an adorable movie about two young girls living in Venice, California trying to set their widower dad up on a date because after two years he’s still super bummed out about losing his wife. Billboard Dad came out in 1998 and as a twentysomething, I grew up watching Tess and Emily Tyler flawlessly design a billboard begging women to take their pops out — which of course leads him to his dream woman, because why wouldn't it?

Although this movie took place in America, it should still be noted that this is quite possibly one of Mary-Kate and Ashley’s best movies. It’s also one of the hardest movies to decipher which twin is which. I mean how are you supposed to point Mary-Kate out when BOTH of them are playing tomboys? After re-watching it, here’s the answer: Mary-Kate is the better swimmer, Ashley is the one crushing on the swim teacher. I don’t know how I missed that before, because it’s so obvious now. While watching Billboard Dad brought back fond memories of my childhood, there were loads of things that I just noticed about the film as an adult.

Ugh, wouldn't it be a wonderful thing if rollerblading came back into style? I have fond memories of jumping off sidewalks in my super cool rollerblades. I miss the '90s.

2. The Scrambled Eggs In A Bag Dance

Scrambled eggs in a bag! Did anyone else do the scrambled eggs dance when you were a kid purely because of the Olsen twins? No? Just me? Also: what does it mean when she claims a fork bruises eggs?

3. Their Dad Is A Familiar Face

This lady though! She finds out their dad is a widower and says "Excellent." What kind of monster says that?!

OMG! This brilliant term though...

There's this blast from the past moment when every self-proclaimed "bad boy" rocked the bleached blonde hair. Never have I ever been more grateful for a fad.

8. Their Dad Is Depressing AF

No really though. Two years is a long time to mope when you have children. His depression manifests in a scene where he takes them out for ice cream and just acts like a Debbie Downer the whole time.

9. They Paint The Giant Billboard Themselves

OK, I love that they thought wearing white outfits would disguise them on a white billboard, but they are in the middle of the Sunset Strip next to Chateau Marmont and a cop would have seen them. Also, how did they get a giant picture of their father up there? None of this makes any sense.

10. The Clueless Teacher Makes A Cameo

Ms. Geist is in this movie! She is the first woman to make a surprise appearance at their house responding to the ad, and she is not shy in this role, that's for sure.

11. His Agent Is Clueless

Yo, Nigel is seriously the world’s worst agent ever. If their dad was mildly successful, which he is, that would never be his agent... Ever.

Could the twins have picked worse people for their father? No really though, this is why kids shouldn't be allowed to make any decisions for adults.

“There’s only six spaces on the team. If he’s on it somebody’s going to get bumped off. I’m number six. It’s going to be me.” It took Emily a hot minute to come to this conclusion.

14. Nigel Is The Worst Villain

Seriously though, for a villain he's a straight up joke — completely cartoonish from shiny black loafers to outdated sunglasses.