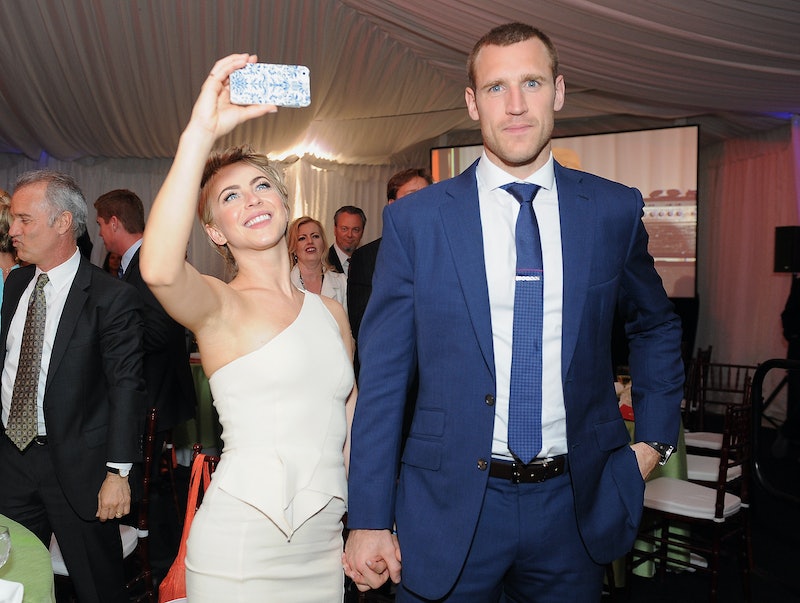 It may be hard to believe, but sometimes celebrities don't marry other celebrities. Sometimes, they branch out a bit from the Hollywood scene and venture into the less perfectly kempt and PR ready waters for potential significant others. Case in point, Julianne Hough is engaged to Brooks Laich in spite of the fact that he isn't exactly a tabloid poster boy. And really, that's a good thing — nay, a great thing. Plus, I don't know if you've seen him or not, but let's put it this way, if I were a Dancing With The Stars judge I'd be generous with my "10" signs when it comes to him. Hough, you done good.

I know not everything is about looks — I'm not that shallow, I promise — so, let's make an effort to get to know the dancing queen's betrothed a little better. You know, to find out about the real him past his extremely well fitting suits and piercing blue eyes...

Ahem. After doing some digging, I've concluded that Laich is a lot more than meets the eye, which is probably why the Washington Capital's player's name sounds so familiar, even to those of us who aren't as well acquainted with sports. Dude is a total star in his own right.

Which is probably a part of the reason why he and his new fiancée click so well. Hough is all about family, just look at all her duets and collaborations with brother Derek.

If You Aren't So Sports Inclined...

Laich is centerman for the Washington Capitals NHL team and his number is 21. So, now you know.

There Is Literally Nothing He Can't Do

He & Hough Are Absolute #Relationship Goals

Can you feel their happiness through your computer screen? Because I'm pretty sure I can.

Sure, Laich is a hockey player and Hough's fiancé, but mostly he just seems like a great person.