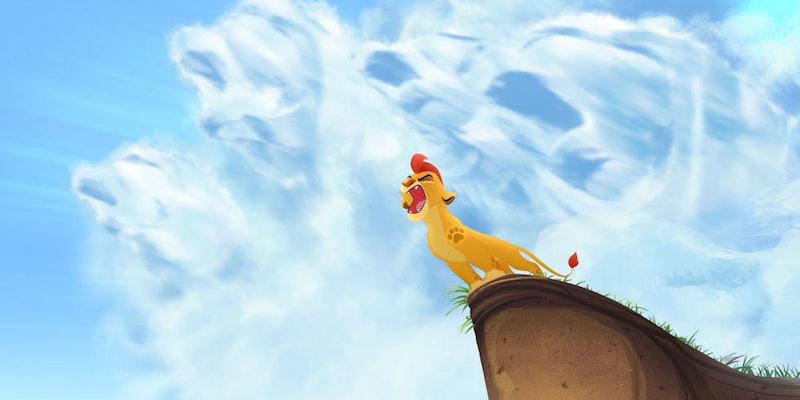 If you are a '90s baby and a Disney fan like me, then The Lion King was a major part of your childhood. The Hamlet-inspired Disney film has some of the most memorable characters and music in film history. Though there have been two spin-offs since the first film premiered in 1994, The Lion King II: Simba's Pride and The Lion King 1½ seem like distant memories at this point. This is why I was extremely excited when Disney announced they were making a Lion King sequel called The Lion Guard , which will hopefully introduce these wonderful characters to a new generation.

Here are six reasons why the new Lion King is perfect for the 21st century.

1. Kion Is The Second Born

Though Kion's position as the second born son means he isn't going to be king, he is still extremely important in the Pride Lands . It's fantastic that Disney is letting all children know that they are important, no matter what birth order position they hold within their family.

Kion is certainly not like his father Simba or his sister Kiara, but his uniqueness is celebrated. He wears his fiery red mohawk and paw-print tattoo as badges of honor. Being different has never been more cool.

3. His BFF Is Bunga The Honey Badger

In my opinion, Timon and Pumbaa will always be the most iconic BFFs in Disney history. However, it looks like Bunga is going to be pretty kickass. After all, what fun is life if you can't cause a little chaos and get into some mischief.

4. The Hyenas Are Still in The Outlands

One of my favorite parts about The Lion King were the hyenas. They were so absurd and ridiculous that they never failed at making me laugh. It looks like they're back in effect in The Lion Guard: Return of the Roar. Hopefully, they will have some even more outlandish things to say.

Kion can't get into too much trouble if Rafiki is still around. After all, he was present at Simba's birth and has always been there to look after the lions in the Pride Lands

Though it took Simba quite some time to find his roar and to gain the courage to become King, it doesn't look like Kion has that issue. With a roar already rivaling his grandfather Mufasa, Kion already has what it takes to lead a military.

The Lion Guard: Return of the Roar premieres on the Disney Channel this November. Though the music might not be as iconic as the original, the storyline definitely looks promising. Check out a clip below.