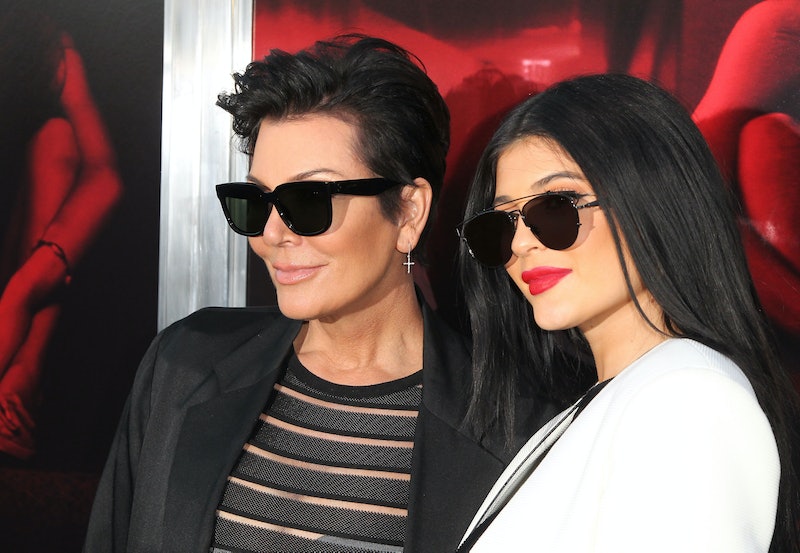 Kylie Jenner has has been an adult for just over a week now, having turned 18 on Aug. 10, but boy is she not wasting any time embracing her newfound status. She really hit the ground running. If I'm being honest, my own 18th birthday was kind of a while ago, so I don't remember it super vividly, but one thing I don't recall is immediately switching over to being a completely different person the moment I blew out my candles. I think I was expecting it to feel more like something important, and then it turned out to be just another birthday. After which I could, like, buy cigarettes, which I've still never done, and vote, which I couldn't do right at that moment. It was slightly anticlimactic.

But Jenner doesn't seem to have had the same experience — probably the first time my life has ever been different from hers, TBH — because things were very different for her right away. One of the first things I noticed was that she seems to have gotten tatted right up! The was barely dry on her 18th birth certificate (they reissue it every year, right??) before she was getting inked herself. Or at least, that's what I'm assuming happened based on the photos of her celebrating in Montreal this past weekend. I guess it could just be drawn on, but Jenner appears to have a little hot pink heart tattooed on the back of her left arm.

See? You might not think it's that rebellious for a tattoo, but if it's real, it's her first, and I'm betting it's no accident that she got it right after she no longer had to get parental permission for it. After all, the Kardashian-Jenner clan has pretty strong feelings about body art, with Kendall Jenner once quoting her half-sister Kim Kardashian as saying, "You wouldn't put a bumper sticker on a Bentley." Well then. It seems like the youngest Jenner didn't put much credence in those words, and if her other activities are any indication, things are only gonna get more adult from here on out, because here's what she's done so far since turning the big 1-8.

The day she turned 18, she posted stills from a pretty racy photo shoot. Good for her for owning her body, but still very jarring for anyone who watched KUWTK since Season 1.

She Went More Public With Her Boyfriend

In case you don't keep up with the drama that is Kylie Jenner's romantic life, she's been rumored to be dating the rapper Tyga for a while now, but now that Tyga has very publicly given her a $260,000 Ferrari, the cat is pretty much out of the bag.

There Were Rumors She Was Going To Do Playboy

And so far they're just that — rumors, but talk about a quick turnaround! A few days ago Jenner couldn't even buy Playboy, but now a magical switch has transformed her into an adult, and she can be in it! What a world.

She Went To Mexico Unsupervised

Jenner is far from a stranger to travel, growing up in the family she did, but there's a big difference between getting dragged along on a trip with your parents and going for a vacation with just you and a bunch of your friends. Mama's little baby's all grown up!

She Had A Lame Party?

According to Radar Online, Jenner's birthday celebrations in Montreal didn't quite live up to her expectations, because she allegedly refused to interact with fans and pushed her birthday cake to the ground without eating it. Hate to break it to you, but parties that don't live up to the hype are kind of the epitome of adulthood. Sorry gal, happens to the best of us.

JK. It's just a wig, but she said it might be her next look, and either way it's very adult.

Congratulations, Kylie Jenner! If you can even hear me say that over the noise of you kicking your childhood away.

More like this
Kylie Jenner Goes Into Labor & Welcomes Her Baby On 'The Kardashians'
By Jake Viswanath
Dixie D’Amelio & Noah Beck “Love Each Other” Despite Breakup Rumors
By Julia Emmanuele, Jordyn Tilchen and Grace Wehniainen
Hailey Bieber Just Responded To *That* Viral Met Gala Moment
By Radhika Menon and Sam Ramsden
Khloé Kardashian Is Reportedly Dating A Private Equity Investor She Met Through Kim
By Jordyn Tilchen and Jake Viswanath
Get Even More From Bustle — Sign Up For The Newsletter