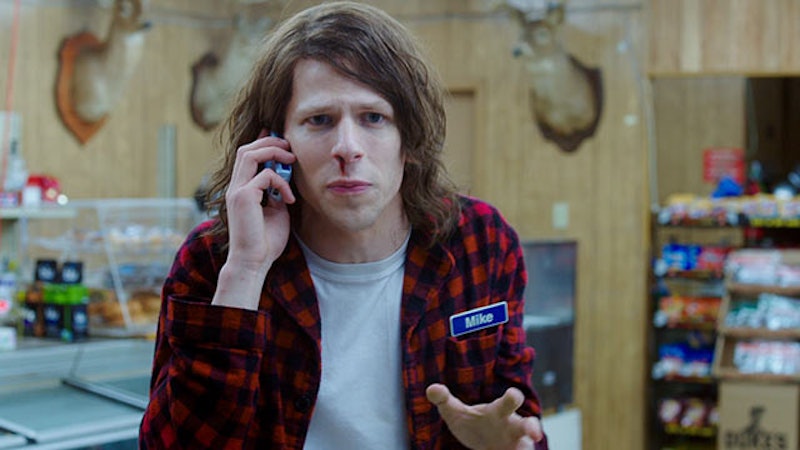 American Ultra features Jesse Eisenberg as you've never seen him before: Kicking ass. The new movie features the usually meek and awkward Eisenberg as an anxiety-ridden small town stoner and cashier who turns into a killing machine after being activated by a mysterious government liaison. As it turns out, Eisenberg's character is actually a part of America's Ultra Program, unbeknownst to him. But what does that entail, exactly — what does American Ultra actually mean?

In the movie, the Ultra Program is a secret government CIA program dating back to the 1950s that selects candidates to brainwash and train into being super spies. Eisenberg's character is one such candidate, and even though he has no recollection of his training, he possesses crazy and deadly abilities he can't explain (like killing people with a spoon). The plot is far-fetched, there's no doubt about that, but the most ridiculous thing about is that it's based on a real U.S. Government program.

The Ultra Program is based on Project MK Ultra, which isn't too terribly difficult to decipher since they kept the word "ultra" in the name. Eisenberg himself even admitted the connection in a fan Q&A with The Guardian, describing his character as, "A guy who has no direction in life who discovers he was brainwashed to be a fighter in a government program based on the MK Ultra program in the States." But just what is MK Ultra?

MK Ultra was a secret, and highly-illegal, program run by the CIA from 1953 until at least 1973. Its purpose? To find a way to control people's minds. Seriously, this stuff is straight out of science fiction. The program is very controversial because most of the people who were experimented on were unwitting subjects, and also because many of the documents pertaining to the experiments have been destroyed. The program used drugs, hypnosis, torture, and other methods in its quest to bend people's will. But were they successful? Depends on who you ask.

The program counts some famous participants among its subjects as well. One Flew Over the Cuckoo's Nest author Ken Kesey and famed gangster Whitey Bulger were both exposed to LSD under false pretenses as part of MK Ultra, and neither learned the truth until many years after their experiments. The program's tests were commonly conducted on University campuses, in prisons, and even in hospitals, often sneaking LSD into the drinking water of common people who had no idea they were part of a government conspiracy. In one of the most high-profile (but unproven) MK Ultra cases, Sirhan Sirhan's lawyers claimed he was under the influence of MK Ultra hypnosis when he assassinated Robert F. Kennedy Jr. But if you believe in some of the MK Ultra conspiracies out there, things get much crazier than that.

According to many conspiracy theorists, MK Ultra is alive and well within our government and is used by Hollywood to control the masses through subliminal messages put out by celebrities. One such celebrity who believes this is Roseanne Barr, who frequently claims that MK Ultra is in control of Hollywood. Tila Tequila claimed that she was a victim of MK Ultra, which she links to the Illuminati of course, and she also called out Britney Spears as a fellow member. Britney is one of the more popular celebs whose erratic behavior MK Ultra truthers point to as proof of glitches in their mind control programming.

So now that you know the truth, make sure you steer clear of Britney Spears because she probably knows how to kill you with nothing more than a spoon.

More like this
Where Is Oscar Torres In 'Only Murders In The Building' Season 2?
By El Hunt
The “Beatrice Six” Were Awarded $28 Million After Their Wrongful Convictions
By Brad Witter
It Took Investigators 23 Years To Correctly Identify Helen Wilson's Real Killer
By Brad Witter
Is Austin Butler Really Singing in 'Elvis'?
By Arya Roshanian
Get Even More From Bustle — Sign Up For The Newsletter