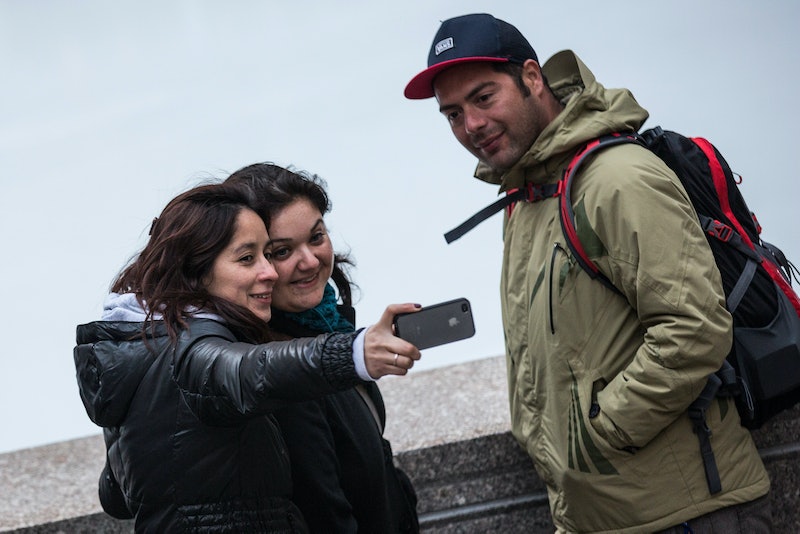 Selfie may be the word of the year, but we'll probably all forget that fact by 2014. According to a new study in the journal Psychological Science, taking photos — rather than just mentally absorbing an experience without a camera lens — may actually be preventing memories from sinking in. "People just pull out their cameras," said Linda Henkel, the study author and researcher at Fairfield University. "They just don't pay attention to what they're even looking at, like just capturing the photo is more important than actually being there."

Sorry, what were we saying?

The research only surveyed a small number of people —27 undergraduates in the first part of the study, and 46 in the second, who were mainly women — but the findings were overwhelmingly similar. Henkel found that when people photographed certain objects, they did worse on memory recognition related to those objects. They also remembered less about what it was they actually photographed, compared to the details they were able to recount about the objects they had seen, but hadn't documented.

While the evidence was clear, Henkel also found something else interesting: when camera users zoom in on a specific object, their ability to retain a memory actually increases. According to Henkel, when you zoom in on one specific part of an object, you’re bringing your visual attention there — and also thinking about the object as a whole.

(We're guessing President Obama is going to remember this selfie — even if he didn't zoom.)

"So what your eyes are doing, what the camera is doing, is not the same thing as what your brain is doing," she said.

Paul D. Nussbaum, a clinical neuropsychologist at the University of Pittsburgh School of Medicine, says this new research reveals just how many different ways our brains process information. One way, is by processing information automatically through taking pictures. But perhaps the more meaningful way we process and store memories is by focusing on an object and, in turn, using personal association to remember things.

"The more we engage our brain into processing a stimuli and the more personal that processing is, the more solid the memory formation and recall," he said.

So the next time you want to preserve a memory forever, you might want to put that camera down. (That means you, serial selfie takers.)