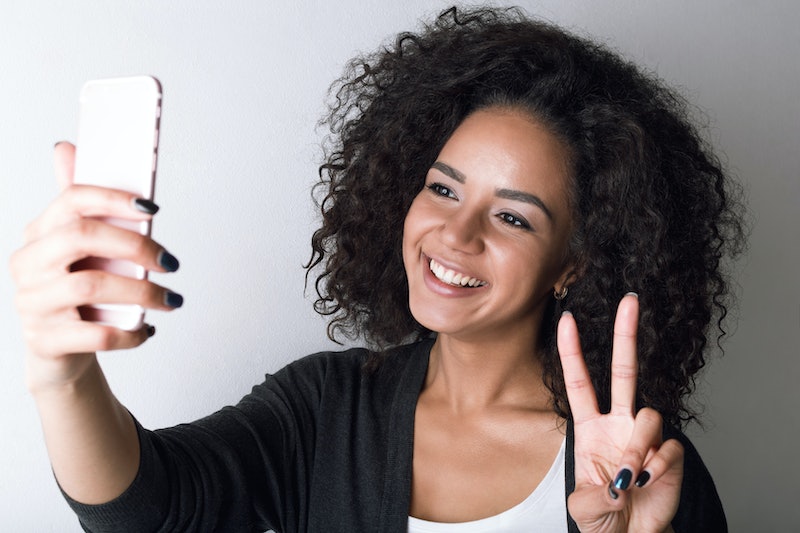 Before we even broach the insurmountable topic of why Miley is taking a selfie in the shower, we need to talk about the word "selfie." It's just been named the word of 2013, according to the golden bastion of English language, the Oxford English Dictionary . Miley, infamous for her Tweets of various selfies, also likely contributed to the force of another contender, "twerk." Bit of a wrecking ball for the English language, eh?

A "selfie" is, according to the Oxford English Dictionary: "a photograph that one has taken of oneself, typically one taken with a smartphone or webcam and uploaded to a social media website." The example they use is super-helpful because it also contains some etiquette advice: "Occasional selfies are acceptable, but posting a new picture of yourself every day isn’t necessary." Ahem.

James Franco's definition of selfie, below, is also quite acceptable.

The word made the cut — beating out not only twerk, but binge-watch (thanks, Netflix) and Bitcoin — largely because of its popularity. Use of the world has increased 17,000 percent during the last year, according to the dictionary's researchers, and the Google Trend box below illustrates just how meteoric the rise of the selfies has been.

Weirdly enough, the word is trending in a massive way in the Philippines. Four of the top cities in which it's trending are Australian, where "selfie" got its start way back in 2002, thanks to a drunk Aussie.

Not one to be ashamed, one guy wrote this on an online forum:

Um, drunk at a mates 21st, I tripped ofer [sic] and landed lip first (with front teeth coming a very close second) on a set of steps. I had a hole about 1cm long right through my bottom lip. And sorry about the focus, it was a selfie.

After his tispy post, hashtags started appearing on Flickr, and from there, there was no stopping the #selfie.

"The hashtag #selfie appeared on the photo-sharing website Flickr as early as 2004, but usage wasn't widespread until around 2012," Oxford English Dictionary editorial director Judy Pearsall said. "The use of the diminutive -ie suffix is notable, as it helps to turn an essentially narcissistic enterprise into something more endearing." Apparently '-ie' suffixes are pretty common in Australian English.

Interestingly enough it hasn't made it into the dictionary's physical form, but it has a place online — at least for now. No word on whether it makes it into the tome itself yet."But as for the shower selfie, there are no words — yet.

More like this
On TikTok, Miley Cyrus’ “Malibu” Is The Soundtrack Of Growth
By Courtney Young
Where Did The TikTok Term “Sneaky Link” Come From?
By Courtney Young
The True Meaning Behind Each Hand Emoji
By Bustle Editors and Emma Carey
TikTok’s “5-9 Routine” Trend Is Here To Boost Your Productivity
By Courtney Young
Get Even More From Bustle — Sign Up For The Newsletter