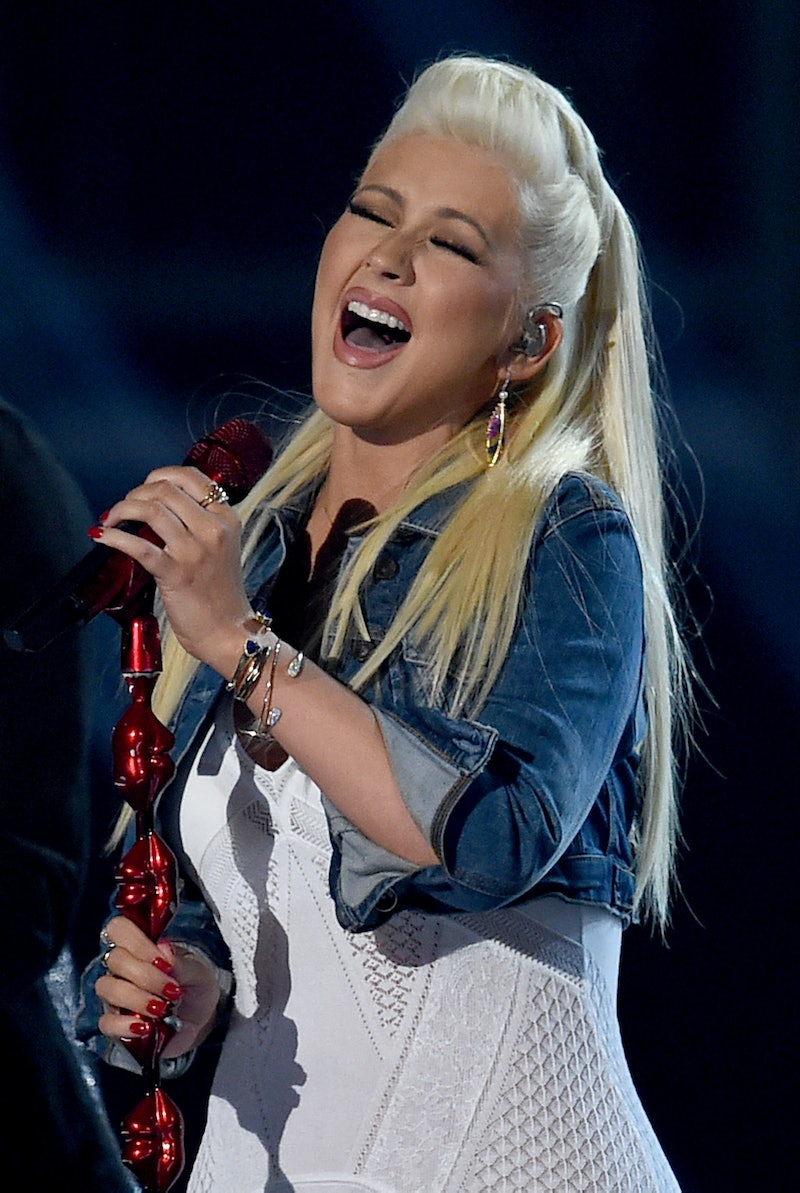 On Tuesday last week, pop diva Christina Aguilera posted a topless selfie on Instagram. It was a little out of character for the singer, but celebrities share risqué pics online all the time these days, so I wasn't shocked. However, the accompanying caption — which seems to hint that Christina Aguilera's new album is coming soon — almost made me do a spit-take. Could it possibly be true? Is the agonizing wait finally coming to an end? Is Aguilera planning to release a new single any day now?? I sure hope so. This is what the 34-year-old artist wrote:

Just so you know with me, it's all real, all the time. Felt like it was time to start sharing some personal stuff with you guys... And it's just the beginning. Night night. X

OK, I could definitely do without the thinly veiled jab at women who have had plastic surgery (let people live their lives, Xtina!), but otherwise, this is a very good/super exciting Instagram caption. We know the star has been working on the follow-up to 2012's Lotus since at least April 2014, so I have a strong suspicion the "personal stuff" she referenced is new music and not more bathroom mirror photoshoots. (Of course, I could be wrong... but I have a good feeling.) I think Aguilera is often at her best when she opens up and gets personal (see: "I'm OK," "Hurt," "All I Need," etc.), and it seems as though that could be the direction she's headed in for her next LP. Sign me up.

A lot has happened in Aguilera's life since Lotus premiered in November 2012. For example, in January 2014, she was featured on a remix of Lady Gaga's "Do What U Want," which led to a dramatic/show-stopping/totally GIF-worthy live performance on The Voice. On a more serious note, in February 2014, she got engaged to her long-time boyfriend, Matthew Rutler. The couple welcomed their first child together, a daughter named Summer Rain, in August 2014. And finally, this past February, Aguilera won her sixth Grammy Award for her collaboration with A Great Big World, "Say Something." It certainly seems like she has a lot of new experiences to write about.

Aguilera said she wanted her upcoming project to be "genuine" and "heartfelt" during an interview with Extra TV in January. "I'm very excited to pour my heart into this record fully," she explained. "I've been gathering and writing and coming up with these amazing ideas for different parts of how I was feeling the past year, so I'm really excited to vocalize all of it and make it all come together." You and me both, Xtina. You and me both.

Fingers crossed Aguilera officially announces her big comeback album before summer is over.