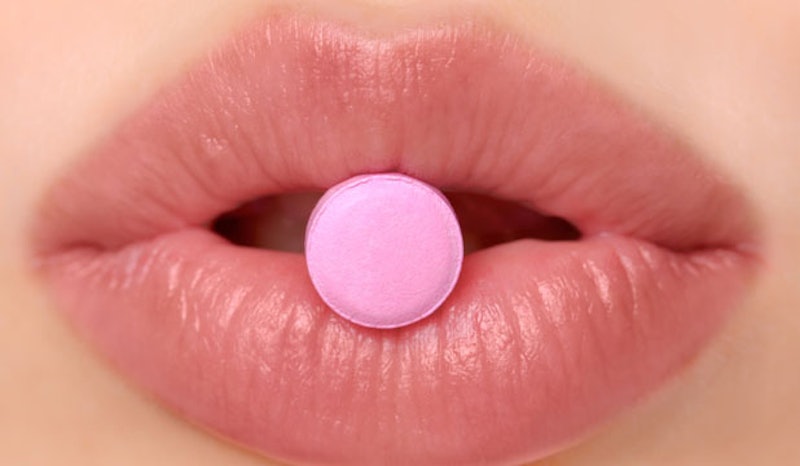 On Tuesday, the FDA has approved flibanserin, the drug that is intended to treat hypoactive sexual desire disorder (HSDD) in women. Despite not having the same physiological impacts on women that the drug Viagra has on men, the medication has been coined "the female Viagra." This medication could potentially benefit women all over the world, but like nearly anything regarding women's sexuality, flibanserin is being used as more fodder for sexist jokes from Internet users who have too much time on their hands, a poor understanding of pharmacology, and generally disrespect women. Not that anyone is surprised, but sexist jokes about female Viagra are already running rampant online.

Despite the fact that flibanserin is now a government-approved legitimate drug that will be used to improve the lives of millions of women, plenty of people think that flibanserin is best used as a punchline about women's sexuality. Twitter users are pulling out all the stops and grasping at sexist tropes that not only demean women, but are just blatantly not even funny in the least. So congratulations (sincerely) to the women and doctors who want access to this medication, and congratulations (sarcastically and with zero respect) to everyone who made a five drink minimum crack about women in the wake of this groundbreaking news. Here's some of the best (and by best, I mean absolutely THE WORST) "jokes" about flibanserin floating around Twitter.

Well, this is disgusting.

Yes, well. Apparently the sex education system has failed yet another citizen.

Oh, duh. Well, I mean, of course, first of all, women ONLY have sex with men, and men are the only ones who want women to have a sex life. Makes perfect sense.

This is a totally #legit opinion.

The Hungry Dominican is going to want to find a new social media manager, ASAP.

Actually we should just stop calling it Viagra because it's really not like Viagra at all.

Yes, yes, we get it. Female sexuality is all about men. Next!

I thought we'd well established the fact that rape isn't funny. Like, really. It isn't funny.

To be clear, desire for a healthy sex drive is not the equivalent to a desire to be pregnant. Also, birth control methods will still work in combination with flibanserin.

I don't know what to say anymore, except that I just poured myself a giant glass of alcohol and will not be looking at the Internet again this evening.

More like this
The Families Of Grenfell Tower Are Still Waiting For Justice, Five Years On
By Bustle UK
35 Sexy Texts To Send Your Partner
By Griffin Wynne and Carolyn Steber
Daryl McCormack On His Unusual First Audition With Emma Thompson
By Olivia-Anne Cleary
GIRLI & Q Fell In Love At A Skatepark & Never Looked Back
By Jessica Morgan
Get Even More From Bustle — Sign Up For The Newsletter