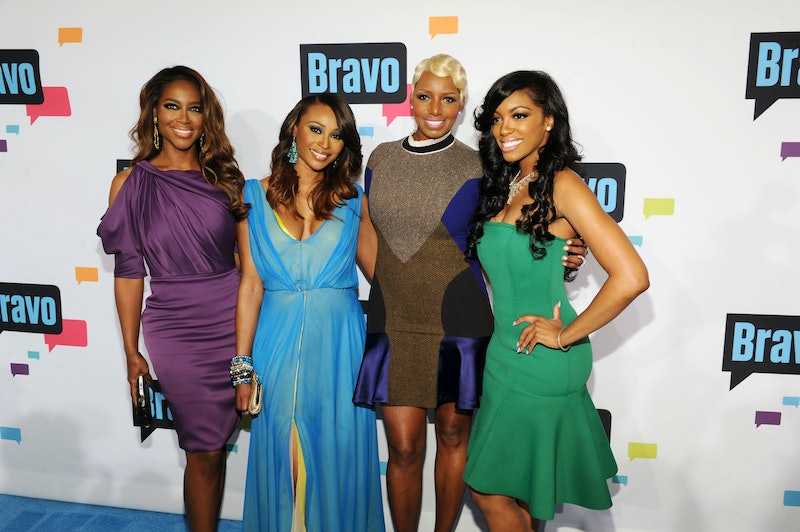 The landscape of reality TV is constantly evolving and adapting a more inclusive and progressive approach to entertainment than some of the other facets of the entertainment industry (looking at you, Hollywood). And now, the latest in (rumored) reality TV news, as reported by Variety on Tuesday, is that Bravo may have cast openly transgender model Amiyah Scott for Real Housewives Of Atlanta. (Bustle reached out to Bravo for comment in response to these reports, but has not yet heard back.) If the casting rumors are true, it would mean that Bravo is taking a massive step in the right direction as the Housewives franchise moves towards total inclusivity and representation.

Variety reported Tuesday that Bravo has not made any official casting decisions regarding Scott's role in the show (i.e. whether she will be a full-blown featured housewife or if she will simply be a reccurring member of the cast). However, one thing is for sure: the cameras are already rolling. According to Variety, Scott was seen filming with the RHOA cast at an event on Monday, marking Scott's first time filming for the upcoming Season 8 of RHOA.

Though it's unclear how prominent Scott's role would be on RHOA if this casting news is true, there is no denying that her presence on the show will be a significant moment in Housewives history. Over the course of its history, the Housewives franchise — and, indeed, Bravo itself — has made increasingly progressive moves towards inclusivity in an industry that clings to its decidedly exclusive (and markedly outdated) model.

Hate on reality TV all you want, but you can't deny that Bravo and its sister networks are forging a path for those marginalized voices and stories that are begging for an audience. Scott's potential casting on RHOA occurs at a time when a multitude of transgender stories are finally being told, joining the reality TV circuit alongside transgender figures like Caitlyn Jenner of I Am Cait and Jazz Jennings of TLC's I Am Jazz, as well as transgender contestants on shows like Big Brother.

In an industry plagued with close-mindedness and a lack of diverse representation, it's clear that reality TV is innovative and progressive in a way that its so-called "high brow" counterparts are not. Bravo and the Housewives franchise seem to be headed towards total inclusivity and representation and I can only hope that the rest of the entertainment industry will take notes and follow suit.