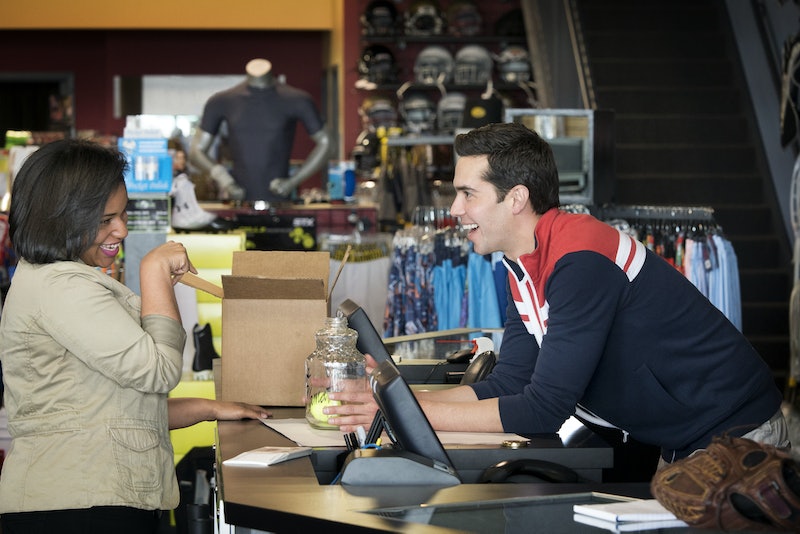 Well, for starters, the series is about tricking unsuspecting, everyday people and catching their reactions on camera. Awesome! Between this series and Impractical Jokers, truTV is kind of cornering the market on prank shows. But, The Carbonaro Effect has an unusual twist: The host and star, Michael Carbonaro, is a professional magician (and actor and stand-up/improv comedian), so he uses his powers of prognostication in his pranks. Take, for instance, this clip, where he borrows a woman's cell phone for a moment, only to have it magically transported to underneath the wall-to-wall carpet in the room their standing in (though the true magic might be Carbonaro convincing someone else that he works for a moving company).

If you think you might've seen something similar to this before, the show is heavily inspired by a bit Carbonaro used to do with Jay Leno on The Tonight Show. It was called "Magic Clerk," and it was basically the same setup: Carbonaro would pretend to be a regular guy working at a store, and he'd pull tricks on unsuspecting shoppers. Check out a couple of his best pranks in the clip below. (Man, I really wish I had someone turn my $5 bills into $100s.)

Carbonaro admits that magic might be a tough sell to a 2015 audience — in fact, he tried to resist it himself. “I had this love/hate relationship with magic," he tells The Interrobang. "Magic can sometimes be a bad word. A lot of people think of their dumb uncle or some stupid clown that they saw. They don’t really know that magic can be super skilled and super wonderful.” The article notes that, after he moved to LA, he couldn't resist the magic any longer. “There’s so much variety art going on in LA that I just think people are hungry for it," he says, "From the Magic Castle and friends I’ve made there I’m absolutely performing more magic than I ever have.” Magic or something like it — I'm not sure if this shaving cream routine from Jimmy Kimmel Live technically counts as magic.

I understand the need for shaving-cream buffoonery, straight-up magic can still be a little cheesy. So, combining it with the hidden camera/live reactions in a prank show set-up is a pretty smooth move. And, I don't know about you, but The Carbonaro Effect will definitely have me looking over my shoulders the next time I'm in a convenience store and something weird starts to happen.