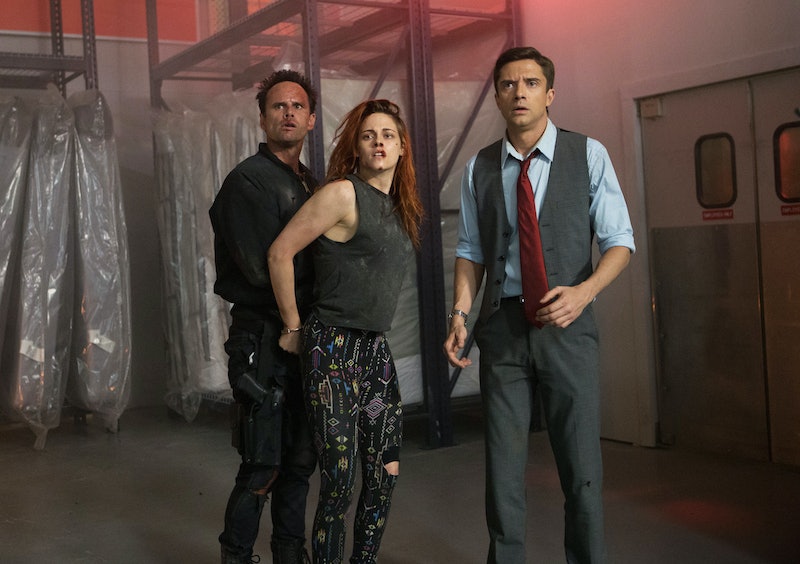 Sometimes I wonder if these lookalike movie stars are actively out to confuse me. In the stoner action-comedy American Ultra , Topher Grace plays a government agent who was involved in the program that secretly trained Jesse Eisenberg's slacker convenience store clerk as a super-soldier. I'm 100% sure he does, based the trailer. Okay, I'm like 85% sure. Maybe 80%. Because Topher Grace and fellow actor Tobey Maguire look so much alike; they can't blame me for getting all turned around.

It is Topher Grace in the American Ultra part. (I tripled checked.) Tobey Maguire isn't in the film, though he and his doppelganger did share a screen in the third of the Sam Raimi Spider-Man movies. (A moment of silence for every crew member on that set who called one by the other's name.) Despite their long resumes and separate careers, Grace and Maguire are often mentioned in the same breath. Why? Brown hair, hooded eyes, just a few inches of height difference. Hell, even their names are similar. And they came up into the national pop culture consciousness right around the same time. The struggle is real for these social media users, who have nothing to do but tweet their frustrations out into the ether.

Never fear. There are ways of distinguishing Tobey Maguire and Topher Grace. How's this for a start?

Think several Spider-Man origin stories back, and remember that Tobey Maguire played a huge role in the establishment of Marvel superheroes as a box office force to be reckoned with. He starred as Peter Parker in three films, starting in 2002. We do not talk about the third one.

My basement was the hang-out spot in high school, so I definitely identify with Eric Forman in That '70s Show. (Mine had less mood-altering substances, but oh well.) Eric was the de-facto center of the '70s Show group and a hero for bored American teens of every decade.

Meanwhile, Grace has remained close with his pals from That '70s Show. He's worked with Ashton Kutcher on other projects, been spotted out with TV girlfriend Laura Prepon, and recently wished Kutcher and Mila Kunis well on their nuptials: "It's like two of your great friends from high school got together after high school and had a baby." Aw.

Meanwhile, Topher Grace is engaged to be married to actress and model Ashley Winshaw, who's appeared in True Blood, Agent Carter, and True Detective, among other projects. And while they should feel free to live their lives however they want, I do submit that their babies would be super cute.

I sincerely hope this helps. Topher Grace and Tobey Maguire deserve their own identities, despite their sneaky attempts to trick me.